On-Demand Webinar: Employer Branding in the Hottest Hiring Market Ever

Three-quarters of professionals in today’s highly contentious job market are more likely to apply to a role if an employer actively manages its brand. However, the challenge for many hiring stakeholders is figuring out not only what an employer brand is, but how to manage, measure and benefit from it.

An employer brand — like company culture — is an abstract idea that’s difficult to measure and is the sum of many parts, such as what employees say about a company online and what a business publicizes about its workplace. Overall, it’s a concept that can be loosely defined as a company’s reputation. And in a market with an unemployment rate of 1.5 percent for tech jobs, those reputations matter when it comes to recruitment and retention.

More companies are coming around to the idea that employer branding is vital to their talent goals. But many talent stakeholders are unsure of the tactics that will optimize their brand and how they can use branding to get the hires they need. Built In’s Director of Brand and Creative Tiffany Meyers recently hosted a webinar featuring Employer Branding Specialists Amy Parker (of Kin & Carta) and Ashten Fizer who shed light on these big topics, as well as where they see the future of branding headed.

These specialists ultimately said there’s no playbook on how employers should manage, measure or capitalize on their brands — each business should just try to tell its unique story and work hard to differentiate itself. Additionally, companies will need to tap into the voices of their employee base to maximize the candor and transparency found in their branding efforts. We’ll recap the major insights from the great conversation below. 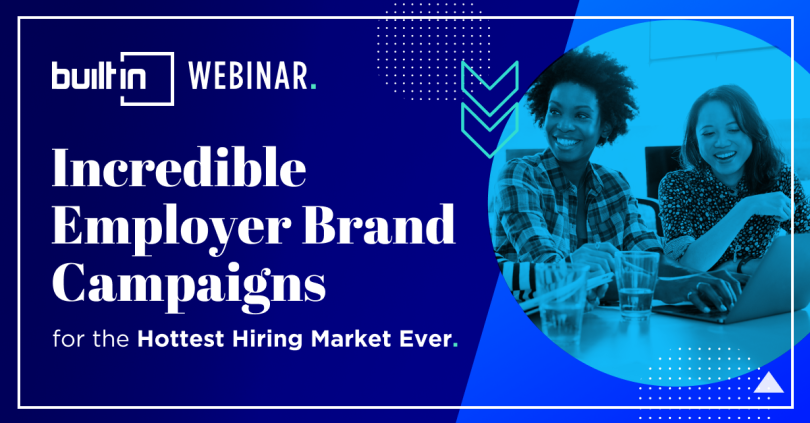 Get Deliberate and Take Risks

Both Fizer and Parker shared stories of their work on branding large-scale campaigns from the past. Fizer and her team built interactive and engaging booths at AfroTech conferences over two years that targeted Black professionals and college grads. Their efforts for one year featured African art, architecture inspired by the popular TV show A Different World, and appearances from Black members of the company’s employee resource group that supports Black staff and allies to speak about their experiences. Fizer said the branding team doubled down on those efforts the following year and that much of their work was based on a desire to try something different.

“We honestly had no clue of what the outcome would be, but we were definitely willing to risk it for this one,” said Fizer.

At Kin & Carta, Parker said the company recently got certified as a B corporation and she dove into the nuance behind the ways that the certification has evolved the company’s brand. She played a video that featured employees discussing: the company’s commitment to honoring the certification, how it connects team members and how it differentiates the business.

Both of these examples were risks that paid off in greater hiring numbers and opportunities for current staff to rally around a common goal. Overall, employers can market their brand to their target audiences by speaking their language and appealing to that talent in ways that are authentic to them.

How To Make Brand Measurement Work

There are a million metrics companies can use to measure the effectiveness of their branding efforts and those measurements will (and should) differ from business to business. For instance, Fizer looked at applicant conversion rates and cost per hire. Ultimately, measurements should be determined by what matters most to a company.

Parker said branding stakeholders should ask themselves, “What does my business need my brand to do to hire qualified applicants? When you identify those needs and those KPIs are your north star, then you can determine the relevant measurements.”

A question was posed around how to manage Glassdoor interviews from former and current staff. The specialists went into ways they keep a pulse on how employees are feeling on and off the platform, like having exit interviews to get a sense of internal biases and areas of improvement. Fizer said her recruitment team held a contest and told employees that if they left a certain amount of reviews on Glassdoor — good, bad or indifferent — the company would get the day off.

“​​There are so many metrics out there but whatever metric you're looking at, it needs to be responsive to the needs of the business.”

“People no longer want to hear from the big brand about how great the big brand is to work for,” said Fizer. “But they will believe the non-binary UX designer who says that they felt seen when the job application asked them how they want to identify.”

Fizer and Parker agree that branding is far more impactful when messages come from employees.

“It allows a candidate to look at a brand and then see themselves in it, and that’s so important to personalize who a brand is,” said Parker. “And then also I see it really impacting employees internally. It increases employee engagement because if someone's highlighted and they're given a platform to tell their story, it helps them feel valued.”

Employer Branding in the Hottest Hiring Market Ever