Chandler Carran wanted to learn and grow; now she’s servicing logistics customers, honing leadership skills and hoping to mentor the next generation of tech talent.
Written byRobert Schaulis
Robert Schaulis
Staff Writer at Built In
Robert Schaulis is an author and journalist who has written on the subjects of agriculture, business and technology.

Some people discover their calling at a young age and gravitate toward their dream job all their lives. While that drive and tenacity is impressive, every third grader is not a marine biologist in training. People grow. Priorities change. Options expand and contract.

In many ways, it’s a measure of maturity — not a measure of one’s abilities — to acknowledge that what we look for in a career at 25 is different from what it was at 12 or 18 years old.

That is exactly the mindset Chandler Carran had when she approached Reibus. A recent graduate of the University of Florida, Carran was not so much looking for a dream job as she was pursuing a “dream career path,” looking for a role in which she could apply her skills, grow as a professional and contribute to something significant.

At Reibus, Carran found that opportunity in working to solve deeply ingrained supply-chain problems through technology.

Reibus is an independent SaaS-enabled marketplace that enables hundreds of industrial businesses to buy and sell industrial material on a single intuitive platform.

“I wanted to work in a place where the product was an undeniable necessity, where what I said and did every day actually had an impact,” Carran said. “I wanted to find a place where I could grow, make decisions and not be locked into a role, having to jump over hundreds of hurdles.” 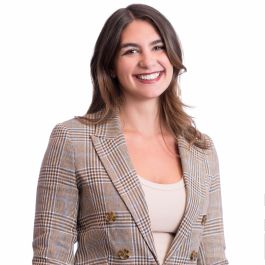 As a logistics account manager, Carran has carved out her dream career path. In her role, Carran coordinates with internal stakeholders — the purchasing team, carrier sales team, and core sales team — and customers and suppliers. She is responsible for quoting freight costs, shipping orders, maintaining the data integrity of Reibus’ truck management system and maintaining the company’s double-blind shipment process.

“It’s hard to put my role into words. Put simply, it’s ‘scheduling shipments,’ but there’s a whole lot of planning, communicating and problem-solving that goes along with that,” Carran said. “Marketplace account managers are kind of the all-knowing of the company. We know what has shipped, what’s waiting to ship and what is now the invoicing team’s task. It’s a fun job of getting to work with all the customers and help shape their Reibus experience.”

Carran and her team are some of the last people that Reibus’s customers interact with, and the opportunity to make their experience special is one of the opportunities that she relishes.

Read on to learn more about Carran’s journey with Reibus, the company’s team and mission and the opportunities she and other team members enjoy at the company.

Give us a snapshot of your career so far. What has been your path to this point?

My career at Reibus began in April 2021. Prior to that, I was working in territory sales in the consumer goods retail space.

When I joined the company, I started as a national sales rep. Although I had an inkling that I really didn’t want to be in a pure sales role, I knew that I loved what the company was trying to do — not only in the industry but for workplace culture, as well. I challenged myself to try to succeed as an NSR, and it was a great learning experience but not the role for me. In December 2021, I transitioned to the logistics team where I learned more about the industry. I became a carrier sales rep, a sales-heavy role that gave me more knowledge of the transportation industry and how carriers operate. I did well in this role, but ultimately, it was too static for me.

Since July 2022, I have been one of two logistics account managers for the marketplace, and that has been anything but static. With this role, I’m in the right place to grow. I’ve been successful in this position because of my two previous roles. I understand where the sales team is coming from and where the carrier team is coming from, and this can be leveraged to keep both sides happy and create a different rapport than what you often see between sales and operations. I love what I’m doing now. It has a sales undertone with customer service, people skills and quick thinking being at the forefront.

“I don’t ever want to stop learning or become complacent.”

How does working for Reibus help you make progress toward your career goals?

Reibus has put me in growth situations. The reality of a startup is that there are “gaps,” and you don’t know about those gaps until it’s time for a solution. Being in a place where people need me to step up and figure out solutions in a timely manner has allowed me to operate in a more proactive state, to anticipate problem situations before they happen and propose solutions. Because no one has really done my job before me, there’s no handbook, and this gives me a certain ownership of the development of the job and how we handle these gaps.

What makes Reibus a unique place to work?

There is very little concern with what you did before Reibus and more of a focus on what you are currently bringing and the potential you have as a person. I am early in my career, and I’ve always associated that with people not taking me seriously. But no one cares if you are early in your career here, and I think that’s pretty cool.

I think the way everyone communicates in the company is refreshing. It’s light-hearted from the top down. I consider a lot of my colleagues friends. When you spend a work week with people, you want to enjoy it. I have a good time at work even on tough days. This December, a bunch of us are playing in a kickball tournament on a Saturday. I don’t think everyone could say they want to go spend a day off like that.

How have you grown professionally at Reibus?

I’ve always felt personal and professional growth are intertwined. The skill I would say I’ve developed more than any other is confidence. Being confident in my work has allowed me to accomplish so much more than I ever thought I could. It encourages me to keep learning everything I can. I know what I’m talking about, so being able to come across that way has really helped me interact with my coworkers and customers.

I’ve also learned to listen, and this has really helped me to better absorb and process information. Improved listening has also helped me be a better speaker.

“Young women leaders in the tech and metals space aren’t a dime a dozen, and I believe they’re essential to the future success of those industries.”

How are managers involved in the career development of direct reports?

Managers are close to their direct reports. They see how we are growing in our roles and are there to give open and honest feedback. I moved into my current role as a result of a real conversation with my manager. He was honest with me about his hesitations and what was needed out of me before I could transition. Ultimately this led to me thinking about what I really wanted personally and professionally. I committed to the decision and have been succeeding in my role since.

What are you excited to accomplish next?

I am excited to continue growing and to become an accomplished leader. There are so many people who have been instrumental in my growth, and I would like to help others grow into their professional selves.

Young women leaders in the tech and metals space aren’t a dime a dozen, and I believe they’re essential to the future success of those industries. I would love to be half the role model of those who’ve been there for me since April 2021 for the upcoming generation of professionals.