“Traffic Tech’s team is definitely top three, for me, as far as teams I've been on,” Senior Account Executive Alex Brown said. “And I've been on two NFL teams.”
Written byRobert Schaulis
Robert Schaulis
Staff Writer at Built In
Robert Schaulis is an author and journalist who has written on the subjects of agriculture, business and technology.

When Alex Brown first joined Traffic Tech as a senior account executive in March of this year, he had a simple question: who does the most?

“That’s the person I wanted to go get,” Brown said. “That’s what I was shooting for — to get on that level.”

As part of the sales team for the rapidly scaling third-party logistics company, Brown knew he could bring years of business development experience to bear on his new role. And his fiery competitiveness and a desire to make the Traffic Tech team exceptional made him an ideal fit. 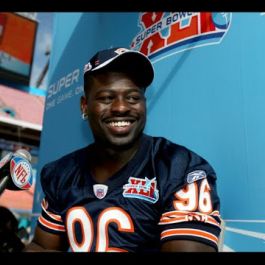 If Brown sounds like an expert in fueling a team effort with a personal motivation, it’s because he’s done so at the highest level of professional competition. Brown played nine seasons as a defensive end in the National Football League — including eight as a Chicago Bear where he tallied the fourth-most sacks in the team’s 103-year NFL franchise history.

“Traffic Tech’s team is definitely top three, for me, as far as teams I've been on ... And I've been on two NFL teams”

Brown was a key part of the Bears’ unlikely 2005 season, in which the team rebounded from a 1-3 start after the loss of their starting quarterback and made the playoffs — largely on the merits of a relentless defense. He also played an important role in the Bears’ subsequent 2006 push to face the Indianapolis Colts in Super Bowl XLI.

At Traffic Tech, Brown found a dedicated group of professionals who shared his will to win and his desire to deliver extraordinary results.

“Traffic Tech’s team is definitely top three, for me, as far as teams I've been on,” Brown said. “And I've been on two NFL teams. We are eager to grow, eager to help, eager to bring on people who can teach and eager to get better at what we’re doing. From the owner to the salespeople to operations, everybody has that energy. And you really need people who are on the same page, as far as Traffic Tech scaling to service some really, really big customers. It's a collective attack.”

As a senior operations manager for the company’s Mexico division, Judith Montenegro has seen her department grow exponentially over her tenure with the company — tripling in size over the last half-decade.

A former track and field athlete, Montenegro is motivated by the same desire to succeed in her role as Brown. From an operations perspective, this has meant building out Traffic Tech’s Team Mexico and empowering her teammates to succeed in their roles. 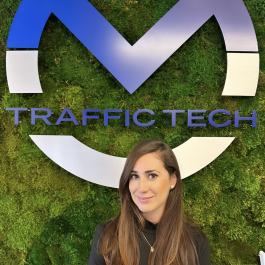 “That’s what motivates me: seeing how much we’ve grown,” Montenegro said. “Landing new accounts, servicing the accounts we have and winning more business; that makes me happy.”

It’s opportunities for success and for professional growth — particularly for women — that Montenegro first remarked when she joined the company six years ago.

“The first thing I noticed is that there are a lot of women in leadership roles. That really stood out to me,” Montenegro said.

Unlike Traffic Tech, many companies working in the logistics space have not historically prioritized elevating diverse voices — particularly women’s voices. And while the industry continues to take steps forward, many women in the field have felt excluded or disempowered in the present or not-so-distant past.

“Logistics is such a male-dominated industry,” Montenegro said. “Giving these opportunities to women as leaders and managers says a lot. Traffic Tech really has our backs. They empower us. They want you to excel in your career, and management will help you get to the next role.”

A 2021 survey of 223 large-scale logistics companies undertaken by executive insight firm Gartner, in conjunction with the not-for-profit AWESOME, has estimated that women made up approximately 41 percent of the supply chain workforce in 2021 — up significantly from 39 percent in 2020. Nevertheless, the numbers fall well short of equal representation — with women making up between 50 and 55 percent of the greater workforce. Impediments to advancement also persist; most roles occupied by women continue to be concentrated in less senior positions — with women making up only 15 percent of executive level leadership roles.

Brown and Montenegro agree emphatically on this point. Traffic Tech is a company that wants its employees to thrive.

To this end, new hires are given the opportunity to sit in and observe different departments in the organization so as to better understand the company, its people and its structure. Managers and their reports meet frequently in one-on-one meetings to determine goals and career objectives and talk about ways in which team members can succeed and move upward in the organization.

Get Alerted for Jobs from Traffic Tech

Montenegro has experienced the company’s focus on career development firsthand. Having moved through the ranks of the company into her current senior role, she understands the extent to which Traffic Tech is serious about valuing its people. When a recruiter from another logistics company reached out to Montenegro with a nearly impossible-to-refuse opportunity years back, she approached Traffic Tech leadership. Traffic Tech made it a priority to create a comparable position for Montenegro to advance within the company.

“Logistics is a booming industry. There are so many startups. People are constantly reaching out to you on LinkedIn — especially if you’re bilingual — and I’ve seen many employees approached with opportunities. That includes myself,” said Montenegro. “But Traffic Tech is so good at recognizing talent. They know what they have, and I know the grass isn’t always greener on the other side. I’m glad that my managers believed in me. I’m so glad to have grown in my career with Traffic Tech and continue to develop.”

Growth Opportunities Always on the Horizon

Bannerman first joined Traffic Tech in 2013 as an experienced sales leader. But, like Brown, Bannerman is another sports luminary turned logistics sales professional. He spent eight years in the National Hockey League, seven of them with the Chicago Blackhawks. 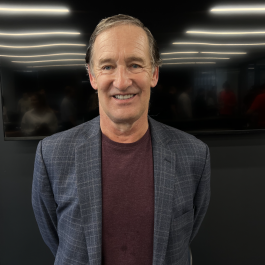 According to NHL.com, Bannerman “sits fifth on the Blackhawks' all-time goalie list,” a list that dates back to the team’s first game in 1926. His goalie mask is iconic to generations of hockey fans.

Bannerman’s LinkedIn, though, gives the impression that goaltending was a 9-to-5, as his job description reads simply, “stopped pucks.”

In his current role, Bannerman manages all aspects of Traffic Tech’s sales and marketing in North America. That includes building out a team that feels heard and continues to realize opportunities for growth.

“We encourage our employees to set ambitious career goals and strive to foster and focus on continuous learning and skill development, so that they can grow within our organization,” Bannerman said. “We encourage a culture of trust that empowers every employee to offer their unique perspective, regardless of their role. The growth at Traffic Tech is uncapped for employees of any role or title, and we encourage our employees to continue to develop within the company to pursue their personal and career goals.”

Career growth opportunities abound in logistics, and Traffic Tech has made a concerted effort to retain and grow talent as the company continues to build out its presence in the global industry. Bannerman himself first joined Traffic Tech when its sales division vice president ascended to the presidency. During his time with the company, Traffic Tech has more than doubled its revenue. It’s quintupled the size of its team. The company has expanded internationally to more than 45 locations around the globe.

“I don’t think Traffic Tech is necessarily unique in the sense of something unprecedented. We just do things better,” said Brown. “There are a lot of logistics companies out there, and on some level, we’re all trying to do the same thing.”

If Brown had to boil down Traffic Tech’s value proposition, it wouldn’t be something arcane or recondite. It would be a focus on delivering successful results to employees, partners and customers.

Montenegro echoes that sentiment when she recalls consulting with a customer opening a new plant in Mexico. The Traffic Tech team flew to this new market with their customer and worked to source carriers and develop what is now one of the company’s largest partnerships.

“I feel like we do more — for our team members and our customers. Customers have told us, ‘we feel like we're your only customer,’” Montenegro said. “And I always tell my team — forgive my language — we need to service the crap out of these customers. I’ve made that my personal mission. I want all my customers to feel like they're the only one.”

Get Alerted for Jobs from Traffic Tech
Responses have been edited for length and clarity. Images provided by Traffic Tech.
Logistics