Imagine someone claimed to create a model to identify terrorists trying to board flights with greater than 99 percent accuracy ... entirely in their head. Would you believe them?

Well, here’s the model: simply label every single person flying from a U.S. airport as “not a terrorist.” Given the 800 million average passengers on U.S. flights per year and the 19 (confirmed) terrorists who boarded U.S. flights from 2000–2017, this model achieves an astounding accuracy of 99.9999999 percent! That might sound impressive, but I have a suspicion the Department of Homeland Security will not be calling anytime soon to buy this model. While this solution has nearly perfect accuracy, this problem is one in which accuracy is clearly not an adequate metric.

The terrorist detection task is an imbalanced classification problem: we have two classes we need to identify—terrorists and not terrorists—with one category (non-terrorists) representing the overwhelming majority of the data points. Another imbalanced classification problem occurs in disease detection when the rate of the disease in the public is very low. In both these cases, the positive class—disease or terrorist—greatly outnumbers the negative class. These types of problems are examples of the fairly common case in data science when accuracy is not a good measure for assessing model performance.

Intuitively, we know that proclaiming all data points as negative (not a terrorist) in the terrorist detection problem isn’t helpful, and, instead, we should focus on identifying the positive cases. The metric our intuition tells us we should maximize is known in statistics as recall, or the ability of a model to find all the relevant cases within a data set. The technical definition of recall is the number of true positives divided by the number of true positives plus the number of false negatives.

You might notice something about this equation: if we label all individuals as terrorists, then our recall goes to 1.0! We have a perfect classifier, right? Well, not exactly. As with most concepts in data science, there is a trade-off in the metrics we choose to maximize. In the case of recall and precision, when we increase the recall, we decrease the precision.

Again, we know intuitively that a model labeling 100 percent of passengers as terrorists is probably not useful because we would have to ban every single person from flying. Statistics provides us with the vocabulary to express our intuition: this new model would suffer from low precision or the ability of a classification model to identify only the relevant data points.

As we increase precision, we decrease recall and vice-versa.

Now, we have the language to express the intuition that our first model, which labeled all individuals as not terrorists, wasn’t very useful. Although it had near-perfect accuracy, it had zero precision and zero recall because there were no true positives!

Say we modify the model slightly and identify a single individual correctly as a terrorist. Now, our precision will be 1.0 (no false positives), but our recall will be very low because we still have many false negatives. If we go to the other extreme and classify all passengers as terrorists, we will have a recall of 1.0—we’ll catch every terrorist—but our precision will be very low, and we’ll detain many innocent individuals. In other words, as we increase precision, we decrease recall and vice-versa.

In some situations, we might know we want to maximize either recall or precision at the expense of the other metric. For example, in preliminary disease screening of patients for follow-up examinations, we would probably want a recall near 1.0—we want to find all patients who actually have the disease—and we can accept a low precision - we accidentally find some patients have the disease who actually don’t have it - if the cost of the follow-up examination isn’t high. However, in cases where we want to find an optimal blend of precision and recall, we can combine the two metrics using the F1 score.

The F1 score is the harmonic mean of precision and recall, taking both metrics into account in the following equation:

We use the harmonic mean instead of a simple average because it punishes extreme values. A classifier with a precision of 1.0 and a recall of 0.0 has a simple average of 0.5 but an F1 score of 0. The F1 score gives equal weight to both measures and is a specific example of the general Fβ metric where β can be adjusted to give more weight to either recall or precision. (There are other metrics for combining precision and recall, such as the Geometric Mean of precision and recall, but the F1 score is the one we use most often.) If we want to create a classification model with the optimal balance of recall and precision, then we try to maximize the F1 score.

I’ve thrown a couple of new terms at you so we’ll walk through an example to show how they’re used in practice. Before we can get there, though, we need to talk briefly about two concepts we use to show precision and recall.

First up: the confusion matrix, which is useful for quickly calculating precision and recall given the predicted labels from a model and the true labels. A confusion matrix for binary classification shows the four different outcomes: true positive, false positive, true negative, and false negative. The actual values form the columns, and the predicted values (labels) form the rows (you may see the rows and columns reversed—there isn’t a standard). The intersection of the rows and columns shows one of the four outcomes. For example, if we predict a data point is positive, but is actually negative, this is a false positive.

Going from the confusion matrix to the recall and precision requires finding the respective values in the matrix and applying the equations:

The other main visualization technique for showing the performance of a classification model is the Receiver Operating Characteristic (ROC) curve. Don’t let the complicated name scare you off! The idea is relatively simple: the ROC curve shows how the recall vs. precision relationship changes as we vary the threshold for identifying a positive data point in our model. The threshold represents the value above which we consider a data point in the positive class.

If we have a model for identifying a disease, our model might output a score for each patient between zero and one, and we can set a threshold in this range for labeling a patient as having the disease (a positive label). By altering the threshold, we try to achieve the right precision vs. recall balance.

The black diagonal line indicates a random classifier, and the red and blue curves show two different classification models. For a given model, we can only stay on one curve, but we can move along the curve by adjusting our threshold for classifying a positive case. Generally, as we decrease the threshold, we move to the right and upwards along the curve.

Finally, we can quantify a model’s ROC curve by calculating the total Area Under the Curve (AUC), a metric that falls between zero and one with a higher number indicating better classification performance. In the graph above, the AUC for the blue curve will be greater than that for the red curve, meaning the blue model is better at achieving a blend of precision and recall. A random classifier (the black line) achieves an AUC of 0.5.

More on Visualizing DataHow to Create Report-Ready Plots in Python

We’ve covered a few terms, none of which are difficult on their own, but when combined can be a little overwhelming! Let’s do a quick recap and then walk through an example to solidify the new ideas we've learned.

Our task will be to diagnose 100 patients with a disease present in 50 percent of the general population. We will assume a black-box model, where we put in information about patients and receive a score between zero and one. We can alter the threshold for labeling a patient as positive (has the disease) to maximize the classifier performance. We will evaluate thresholds from 0.0 to 1.0 in increments of 0.1, at each step calculating the precision, recall, F1, and location on the ROC curve. Here are the classification outcomes at each threshold:

We’ll do one sample calculation of the recall, precision, true positive rate and false-positive rate at a threshold of 0.5. First, we make the confusion matrix:

We can use the numbers in the matrix to calculate the recall, precision and F1 score:

Then we calculate the true positive and false positive rates to find the y and x coordinates for the ROC curve.

To make the entire ROC curve, we carry out this process at each threshold. As you might imagine, this is pretty tedious, so instead of doing it by hand, we use a language like Python to do it for us! The Jupyter Notebook with the calculations is on GitHub for anyone to see the implementation. The final ROC curve is below with the thresholds above the points. 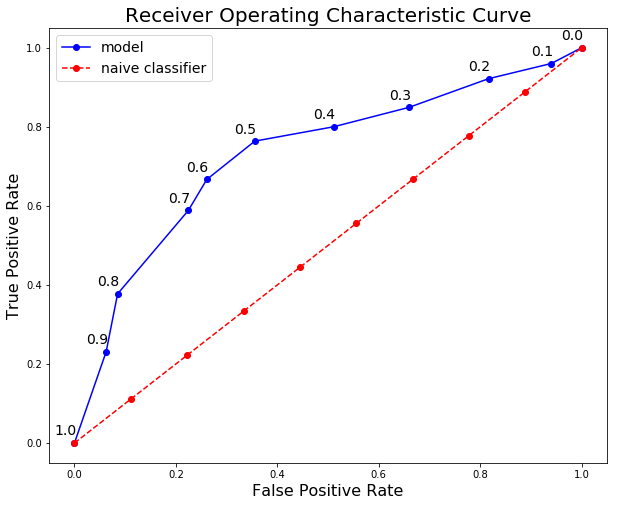 Here we can see all the concepts come together! At a threshold of 1.0, we classify no patients as having the disease and hence have a recall and precision of 0.0. As the threshold decreases, the recall increases because we identify more patients that have the disease. However, as our recall increases, our precision decreases because, in addition to increasing the true positives, we increase the false positives.

At a threshold of 0.0, our recall is perfect—we find all patients with the disease—but our precision is low because we have many false positives. We can move along the curve for a given model by changing the threshold and can select the threshold that maximizes the F1 score. To shift the entire curve, we would need to build a different model. A model with a curve to the left and above our blue curve would be a superior model because it would have higher precision and recall at each threshold.

The final model statistics at each threshold are: 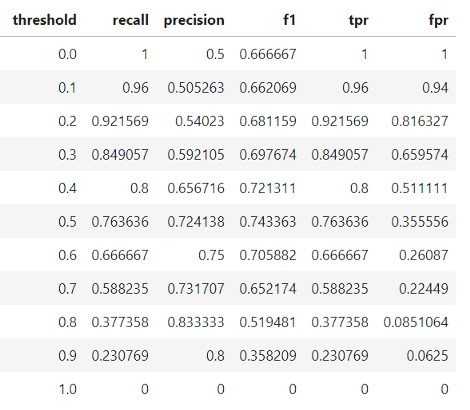 Based on the F1 score, the overall best model occurs at a threshold of 0.5. If we wanted to emphasize precision or recall to a greater extent, we could choose the corresponding model that performs best on those measures.

Precision vs recall with examples

We tend to use accuracy because everyone has an idea of what it means rather than because it is the best tool for the task! Although better-suited metrics such as recall and precision may seem foreign, we already have an intuitive sense of why they work better for some problems such as imbalanced classification tasks.

Statistics provides us with the formal definitions and the equations to calculate these measures. Data science is about knowing the right tools to use for a job and often we need to go beyond accuracy when developing classification models. Knowing about recall, precision, F1 and the ROC curve allows us to assess classification models and should make us think skeptically about anyone touting only the accuracy of a model, especially for imbalanced problems.

As we have seen, accuracy does not provide a useful assessment on critical problems, but now we know how to employ smarter metrics.