The Dirichlet Distribution: What Is It and Why Is It Useful?

If you look  up the Dirichlet distribution in any textbook, you’ll encounter the following definition:

What Is the Dirichlet Distribution?

If we think about the problem of inferring the parameter θ for a distribution from a given set of data x, then Bayes’ theorem says the posterior distribution is equal to the product of the likelihood function θ → p(x|θ) and the prior p(θ), normalized by the probability of the data p(x):

Since the likelihood function is usually defined from the data generating process, the difference choices of prior can make the integral more or less difficult to calculate. If the prior has the same algebraic form as the likelihood, then often we can obtain a closed-form expression for the posterior, avoiding the need of numerical integration.

Suppose we’re going to manufacture six-sided dice but allow the outcomes of a toss to be only one, two or three (so the later visualization is easier). If the die is fair then the probabilities of the three outcomes will be the same and equal to 1/3. We can represent the probabilities for the outcomes as a vector θ =(θ₁, θ₂, θ₃).

In other words, if we observe n dice rolls, D={x₁,…,x_k}, then the likelihood function has the form:

We expect there will be some variability in the characteristics of the dice we produce, so even if we try to produce fair dice, we won’t expect the probabilities of each outcome for a particular die will be exactly 1/3, due to variability in the production process. To characterize this variability mathematically, we would like to know the probability density of every possible value of θ for a given manufacturing process. To do this, let’s consider each element of θ as being an independent variable.

That is, for θ =(θ₁, θ₂, θ₃), we can treat θ₁, θ₂ and θ₃ each as an independent variable. Since the multinomial distribution requires that these three variables sum to one, we know that the allowable values of θ are confined to a plane. Furthermore, since each value θᵢ must be greater than or equal to zero, the set of all allowable values of θ is confined to a triangle.

What we want to know is the probability density at each point on this triangle. This is where the Dirichlet distribution can help us: We can use it as the prior for the multinomial distribution.

The Dirichlet distribution defines a probability density for a vector valued input having the same characteristics as our multinomial parameter θ. It has support (the set of points where it has non-zero values) over

K is the number of variables. Its probability density function has the following form:

We see the Dirichlet distribution indeed has the same form as the multinomial likelihood distribution. But what does it actually look like? 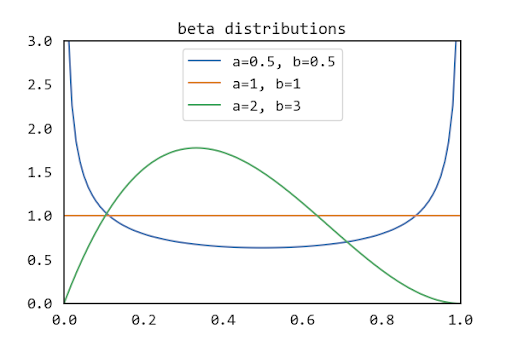 For the Dirichlet distribution Dir(α) we generalize these shapes to a K simplex. For K=3, visualizing the distribution requires us to do the following:

Below are some examples, you can find the code in my Github repository.

In the context of our original dice experiment, we would produce consistently fair dice as αᵢ → ∞. For a symmetric Dirichlet distribution with αᵢ > 1, we will produce fair dice, on average. If the goal is to produce loaded dice (e.g., with a higher probability of rolling a three), we would want an asymmetric Dirichlet distribution with a higher value for α₃.

Now you've seen what the Dirichlet distribution looks like, and the implications of using it as a prior for a multinomial likelihood function in the context of dice manufacturing.