If you’re just getting started on your journey toward becoming a data scientist, these are the 4 most common distributions you’ll encounter.
Written bySara Metwalli
Sara A. Metwalli
Doctoral Student at Keio University
Sara A. Metwalli is a doctoral student researching quantum computing at Keio University in Tokyo. She holds a master’s degree in computer and communications engineering from the Tokyo Institute of Technology.

Probability theory (PT) is a well-established branch of mathematics that deals with the uncertainties in our lives. In PT, an experiment is any process that could be repeated and have a set of well-known different outcomes.

For example: rolling dice. We can repeat the experiment and the dice can fall on one of six constant faces. Each experiment has a sample space that represents all the possible outcomes of that experiment. In the case of rolling a die, our sample space will be {1,2,3,4,5,6}.

Finally, every try of the experiment is called an event.

Theoretically, we can calculate the probability of every outcome using the following formula:

The sum of the probabilities of all possible outcomes should always equal one.

We can write simple Python code to prove the difference between theoretical and experimental probabilities.

The results of running this code will be close to:

As you can see, the more trials we have, the closer we get to the theoretical probability value.

Random variables (RV) have variables determined by the outcome of a random experiment. Going back to our dice, if we define a random variable X as the probability of any outcome, then P(X=5) = 0.166.

There are two types of random variables:

Probability distributions are simply a collection of data (or scores) of a particular random variable. Usually, these collections of data are arranged in some order and can be presented graphically. Whenever we start a new DS project, we typically obtain a data set; this data set represents a sample from a population, which is a larger data set. Using this sample, we can try and find distinctive patterns in the data that help us make predictions about our main inquiry.

For example, if we want to buy shares from the stock market, we can take a sample data set from the last five to 10 years of a specific company, analyze that sample and predict the future price of shares.

The variance (var(X)) is the average of the squared differences from the mean. For example, if we have the same data set from before {4,7,6,3,1}, then the variance will be 5.7.

More From Sara A. Metwalli4 Types of Projects You Need in Your Data Science Portfolio

The 4 Most Common Distributions

There are many different probability distributions out there; some of them are more common than others. Let’s look at the four most commonly used distributions in data science. 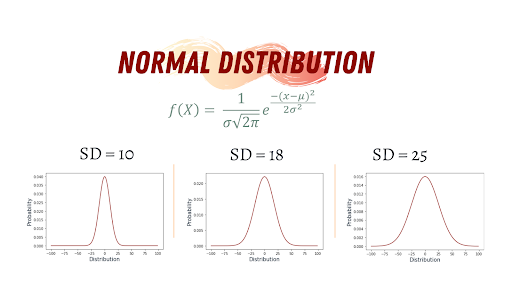 Gaussian distribution (normal distribution) is famous for its bell-like shape, and it’s one of the most commonly used distributions in data science. Many real-life phenomena follow normal distribution, such as peoples’ height, the size of things produced by machines, errors in measurements, blood pressure and grades on a test. 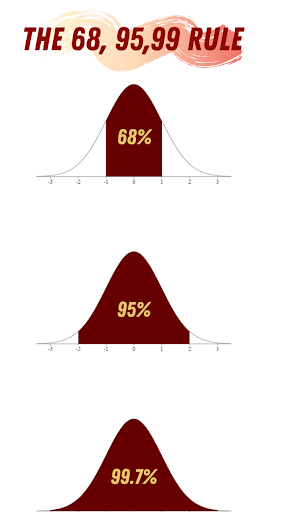 The key characteristics of the normal distribution are: 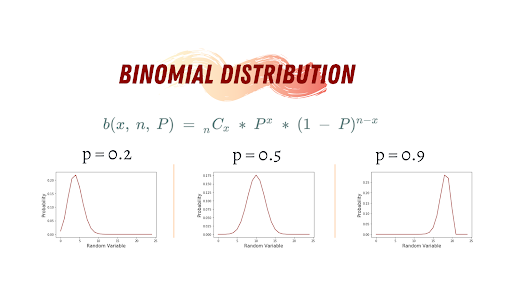 Conditions of the Binomial Distribution

Some examples of binomial distributions in daily life:

Basically, anything you can think about which has two possible outcomes can be represented by a binomial distribution. 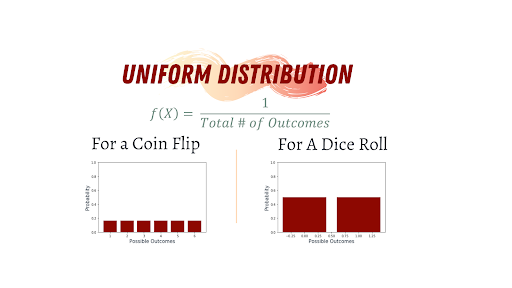 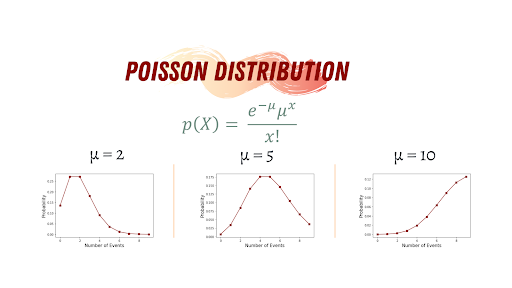 Poisson distribution can be found in many phenomena, such as congenital disabilities and genetic mutations, car accidents, meteor showers, traffic flow and the number of typing errors on a page. Also, business professionals employ Poisson distributions to create forecasts about the number of shoppers or sales on certain days or seasons of the year. In business, overstocking will sometimes mean losses if the products aren’t sold. Similarly, understocking causes the loss of business opportunities because you are not able to maximize your sales. By using this distribution, business owners can predict when the demand is high so they can buy more stock. Here’s the code to generate a poisson distribution in Python.

There are many more distributions out there to learn. However, knowing these four will get you started as you launch your data science career.