NLP for Beginners: A Complete Guide

I’ve been fascinated by natural language processing (NLP) since I got into data science. My background is in technical writing and rhetorical theory so I’m drawn to projects involving text like sentiment analysis and topic extraction because I wanted to develop an understanding of how machine learning can provide insight into written language.

I always wanted a guide like this one to break down how to extract data from popular social media platforms. With increasing accessibility to powerful pre-trained language models like BERT and ELMo, it is important to understand where to find and extract data. Luckily, social media is an abundant resource for collecting NLP data sets, and they’re easily accessible with just a few lines of Python.

The best sites for web scraping are Twitter, Reddit and Genius. Each of these platforms offer an incredible amount of data that will be useful for just about any kind of NLP practice. Before you start, you'll need to know the basics of Pandas and SQLite.

This article teaches you how to extract data from Twitter, Reddit and Genius. I assume you already know the basics of Python libraries Pandas and SQLite.

Before getting into the code, it’s important to stress the value of an API key. If you’re new to managing API keys, make sure to save them into a config.py file instead of hard-coding them in your app. Make sure not to include them in any code shared online. API keys can be valuable (and sometimes very expensive) so you must protect them. If you’re worried your key has been leaked, most providers allow you to regenerate them.

Add the config file to your gitignore file to prevent it from being pushed to your repo too!

Twitter provides a plethora of data that is easy to access through their API. With the Tweepy Python library, you can easily pull a constant stream of tweets based on the desired topics. Twitter is great for mining trends and sentiment.

For this tutorial, you’ll need to register an app with Twitter to get API Keys. Check out the official Twitter documentation if you’re not familiar with their developer portal!

Save the following keys to a config file: 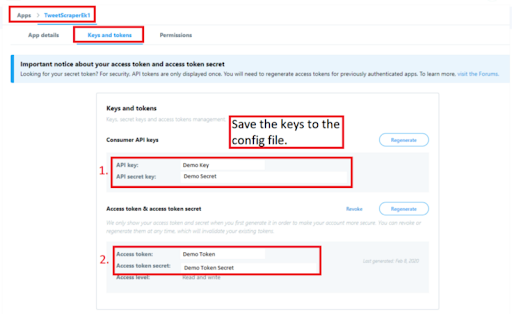 To save the data from the incoming stream, I find it easiest to save it to an SQLite database. If you’re not familiar with SQL tables or need a refresher, check this free site for examples or check out my SQL tutorial.

The function unidecode() takes unicode data and tries to represent it in ASCII characters.

I need to create the table and store the data. I use SQLite because it is lightweight and server-less. Plus I like keeping all the data in one place!

Notice I use IF NOT EXISTS to make sure the table doesn’t already exist in the database. Remember to commit the transaction using the conn.commit() call.

Here is some boilerplate code to pull the tweet and a timestamp from the streamed twitter data and insert it into the database.

You can see the code is wrapped in a try/except to prevent potential hiccups from disrupting the stream. Additionally, the documentation recommends using an on_error() function to act as a circuit-breaker if the app is making too many requests.

You’ll also notice I wrap the stream object in a while condition. That way, it stops if it hits the 420 error.

Notice the twitterstream.filter uses trackto find keywords in tweets. If you want to follow a specific user’s tweets, use .filter(follow=[“”]).

Extract Data From the SQLite Database

Looking for More NLP Projects? We Got You.3 Ways to Learn NLP Using Python

Like Twitter, Reddit contains a jaw-dropping amount of information that is easy to scrape. If you don’t know, Reddit is a social network that works like an internet forum allowing users to post about whatever topic they want. Users form communities called subreddits, and they up-vote or down-vote posts in their communities to decide what gets viewed first and what sinks to the bottom.

I’ll explain how to get a Reddit API key and how to extract data from Reddit using the PRAW library. Although Reddit has an API, the Python Reddit API Wrapper, or PRAW for short, offers a simplified experience. PRAW supports Python 3.5+.

A Reddit user account is required to use the API. It’s completely free and only requires an email address.

Registering an App for Keys

If it is your first time, follow the steps below to get an API key after signing into Reddit. If you already have a key, go to your apps page.

Click Visit Old Reddit from the user options. The page will change and the URL will become https://old.reddit.com/.

Click the preferences link next to the logout button.

Click the are you a developer? create an app… button. 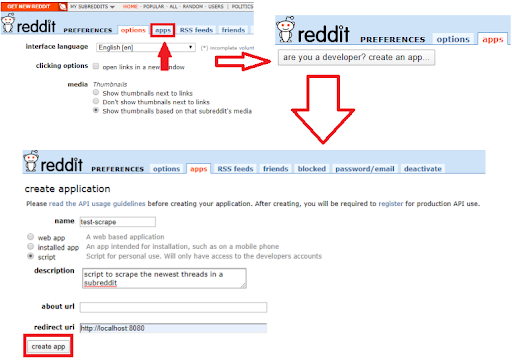 Select the type of app.

The API information required to connect will display. Congratulations on getting set up to scrape Reddit data!

The recommended way to install PRAW is to use pip, then install the following packages to create the dashboard.

Start by importing the libraries and the config file:

PRAW uses OAuth authentication to connect to the Reddit API.

Here’s a list of examples I think would be fun to explore:

Another Eric Kleppen Tutorial? I Thought You’d Never Ask!Create a Linux Virtual Machine on Your Computer

Use the subreddit class in PRAW to retrieve the data from the desired subreddit. It’s possible to order the data based on the following Reddit options:

If you want to include multiple subreddits, use a + symbol:

This returns an object that holds the data in an attribute. The attribute is like a key in a dictionary.

The data is linked to an attribute owned by the object. If the attribute is the key, the data is the value. The attributes are dynamically generated, so it is best to check what is available using Python’s built-in vars() function.

I’m a fan of music, particularly heavy metal. In heavy metal, the lyrics can sometimes be quite difficult to understand, so I go to Genius to decipher them. Genius is a platform for annotating lyrics and collecting trivia about music, albums and artists. Genius allows users to register an API client.

For legal reasons, the Genius API does not provide a way to download song lyrics. It’s possible to search lyrics, but not download them. Luckily for everyone, Medium author Ben Wallace developed a convenient wrapper for scraping lyrics. Check out his original code on GitHub.

I’ve modified Ben’s wrapper to make it easier to download an artist’s complete works rather than code the albums I want to include. I also added an artist column to store the artist name.

The wrapper uses the API to help the URLs link to the lyrics. From there, Beautiful Soup parses the HTML for each URL. The process results in a dataframe that contains the song title, URL, artist, album name and lyrics:

The wrapper is a class named GeniusArtistDataCollect(). Use it to connect to the API and retrieve song lyrics for a specified artist. In the example, I use one of my favorite metal bands, The Black Dahlia Murder.

To use GeniusArtistDataCollect(), instantiate it, passing in the client access token and the artist name.

Call get_artists_songs() from the GeniusArtistDataCollect object. This will return as a Pandas DataFrame.

The Genius lyrics example uses BeautifulSoup to scrape the lyrics from the website. Web scraping is a useful technique that makes it easy to collect a variety of data. I walk through an additional web scraping example in a previous article. Although I haven’t yet used his methods, fellow Built In Expert Contributor Will Koehrsen walks through scraping and parsing Wikipedia. Check out his work!

Will Koehrsen on Built InWhen Accuracy Isn’t Enough, Use Precision and Recall

Although I think it is fun to collect and create my own data sets, Kaggle and Google’s Dataset Search offer convenient ways to find structured and labeled data. Kaggle is a popular competitive data science platform. I’ve included a list of popular data sets for NLP projects.

As NLP becomes more mainstream, it’s important to understand how to easily collect rich, text-based data sets. Getting into natural language processing can be tough and I hope this  guide simplifies methods to collect text data. With a few lines of Python, the amount of data available at everyone’s fingertips on Twitter, Reddit and Genius is staggering!