Working in data science and having a background in technical writing, I’m naturally drawn to natural language processing (NLP). Machines understanding language fascinates me, and I often wonder which algorithms Aristotle would have used to build a rhetorical analysis machine if he had the chance.

If you’re new to data science, getting into NLP can seem complicated, especially since there are always new advancements in the field. It can be hard to know where to start.

Data scientists working in natural language processing (NLP) focus on using mathematics to develop techniques and models that allow computers to understand, analyze and predict speech or text. Tools like chatbots, email spam detection and Amazon’s Alexa, are all possible thanks to NLP.

The technology might sound complex, but have no fear! These three super simple projects will introduce evergreen NLP concepts and techniques to get you started.

The data used for these projects is the spam email data set; you can find all of the code in my GitHub.

What Can Machines Understand?

While a computer can actually be quite good at finding patterns and summarizing documents, it must first transform words into numbers before making sense of them. Machines learn thanks to mathematics but numbers and language don’t always talk to one another. Before transforming words into numbers, you’ve got to clean your data so the words are free of things like special characters and punctuation, then modified into forms that make them more uniform and interpretable.

We also call cleaning words “preprocessing” the data, which is the focus of our first project: word cloud.

Start by importing the dependencies and the data. The data is stored as a comma separated values (csv) file, so I’ll use the Pandas read_csv() function to open it into a DataFrame.

Next you’ll need to do a quick analysis of the data to eliminate duplicate rows and establish some baseline counts. I use Pandas drop_duplicates to drop the duplicate rows.

By the Way, What’s a Word Cloud?

Word clouds are a useful way to visualize text data because they make understanding word frequency easier. Words that appear more frequently within an email text appear larger in the cloud, which makes identifying keywords easy. 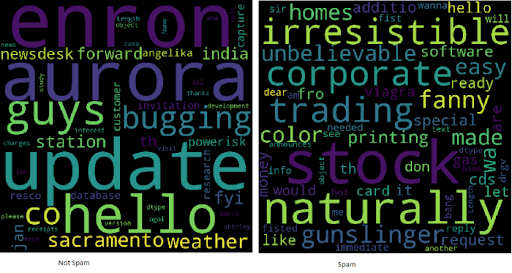 Notice in the above word cloud image, all the text is lowercase. There are no punctuation marks or special characters. That’s because we cleaned the text to make it easier to analyze. Using regular expressions, it’s easy to clean the text using a loop:

I start by creating an empty list named clean_desc. Next I use a for loop to go through the text line by line, setting all the text to lowercase, removing punctuation and special characters, then appending the text to the list. Finally, I replace the text column with the data in the clean_desc list.

More on For LoopsLearn the Fundamentals of Control Flow in Python

Stop words are the most common words like “the” and “of.” Removing them from the email text allows more relevant words to stand out. Removing stop words is a common technique! Some Python libraries like NLTK come pre-loaded with a list of stop words, but it’s easy to create one from scratch.

Notice I include a few email-related words like “re” and “subject.” It’s up to you to determine what words should be included or excluded. Sometimes it’s beneficial to include all words! It all depends on the specifics of your project.

Construct the Word Could

Conveniently there’s a Python library for creating word clouds, which you can install using pip.

When constructing the word cloud, you can set several parameters like height, width, stop words and max words. It is even possible to shape the word cloud instead of displaying the default rectangle.

You can save your word cloud and display it using Matplotlib and .show(). Here are the results of all the records (not taking into account whether or not the email is spam). 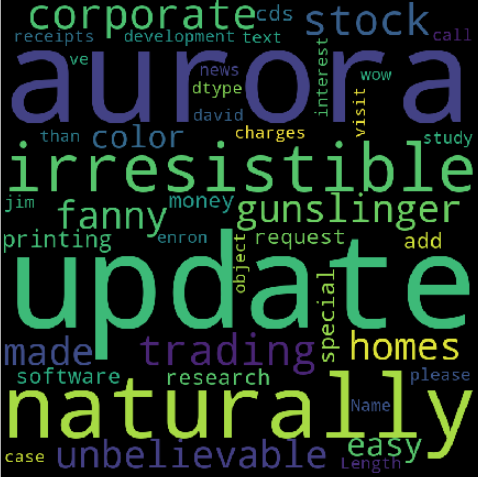 You can take the exercise to the next level by splitting the data frame and making two word clouds to help analyze the difference between keywords used in spam and non-spam emails.

This is a binary classification problem since an email can either be spam (1) or not spam (0). I want to build a machine learning model that can identify whether or not an email is spam and I’ll use the Python library scikit-learn to explore tokenization, vectorization and statistical classification algorithms.

First, import the scikit-learn functionality we need to transform and model the data. I’ll use CountVectorizer, train_test_split, ensemble models and a couple metrics.

When you look at a word cloud, notice they’re primarily single words. The larger the font size, the higher its frequency in the data set. To prevent the word cloud from outputting sentences, the text goes through tokenization, the process of breaking down a sentence into the individual words (tokens).

Using sciKit-learn’s CountVectorizer(), it’s easy to transform the body of text into a sparse matrix of numbers that the computer can pass to machine learning algorithms. To simplify the concept of count vectorization, imagine you have two sentences:

The dog is white
The cat is black

We can show this using code as well. I’ll add a third sentence to show the code counts the tokens.

Notice in the last vector, you can see a 2 since the word “the” appears twice. The CountVectorizer is counting the tokens and allowing me to construct the sparse matrix containing the transformed words to numbers.

Because the model doesn’t take word placement into account, and instead mixes the words up as if they were tiles in a scrabble game, we call this  bag of words method. I’ll create the sparse matrix, then split the data using scikit-learn train_test_split().

Notice I set the sparse matrix text_vec to X and the df[‘spam’] column to Y. I shuffle and take a test size of 45 percent.

I highly recommend experimenting with several classifiers to determine which one works best for this scenario. In this example, I’m using the GradientBoostingClassifier() model from the scikit-learn ensemble collection.

Each algorithm will have its own set of parameters you can tweak; this process is called hyper-parameter tuning. Go through the documentation to learn more about each of the parameters used in the models.

Notice our model achieved 97 percent accuracy. You can take this project to the next level by tweaking the hyper-parameters, exploring different classifiers and trying different vectorizers!

Sentiment analysis is also a classification problem of sorts. The text will reflect a positive, neutral or negative sentiment, otherwise known as the polarity of the text. You can also gauge and account for the subjectivity of the text! There are a ton of great resources that cover the theory behind sentiment analysis.

Instead of building another model, this project uses a simple, out-of-box tool to analyze sentiment: TextBlob. I’ll use TextBlob to add sentiment columns to the DataFrame for analysis.

Built on top of NLTK and pattern, the TextBlob library for Python 2 and 3 simplifies several text processing tasks and provides tools for classification, part-of-speech tagging, noun phrase extraction, sentiment analysis and more. Install it using pip and check out the installation guide.

Using list comprehensions, it’s easy to load the text column as a TextBlob, then create two new columns to store the Polarity and Subjectivity.

TextBlob makes it super simple to generate a baseline sentiment score for polarity and subjectivity. To take this a step further, see if you can add these new features to the spam detection model to increase the accuracy!

Even though natural language processing can seem intimidating, the foundational pieces are pretty simple. There are plenty of libraries that make it easy to begin exploring data science and NLP. These three projects will help you explore concrete ways to apply preprocessing, tokenization, vectorization and feature engineering on text data.