A beginner's guide to supervised learning with Python

The ultimate goal of the supervised learning algorithm is to predict Y with the max accuracy for a given new input X. Here's how that works.
Written byVihar Kurama
Vihar Kurama
Engineer and Developer Advocate at Appsmith
Vihar is a developer, writer, and creator. He is currently working with the growth team at Appsmith as an Engineer and Developer Advocate.

Why is artificial intelligence (AI) and machine learning (ML) so important? Because they're the future. Anyone who doesn't understand this will soon be left behind. There are many kinds of implementations and techniques that carry out AI and ML to solve real-time problems, and supervised learning is one of the most used approaches.

“The key to artificial intelligence has always been the representation.” — Jeff Hawkins

What is Supervised Learning?

In supervised learning, we start by importing a dataset containing training attributes and the target attributes. The supervised learning algorithm will learn the relation between training examples and their associated target variables, then apply that learned relationship to classify entirely new inputs (without targets).

What is Supervised Learning?

To illustrate how supervised learning works, let’s consider an example of predicting the marks of a student based on the number of hours he studied.

is broken down as follows:

Based on the given data sets, the machine learning problem is categorized into two types: classification and regression. If the given data has both input (training) values and output (target) values, then it is a classification problem. If the dataset has continuous numerical values of attributes without any target labels, then it is a regression problem.

Consider the example of a medical researcher who wants to analyze breast cancer data to predict one of three specific treatments a patient should receive. This data analysis task is called classification, and a model or classifier is constructed to predict class labels, such as “treatment A,” “treatment B” or “treatment C.”

Classification is a prediction problem that predicts the categorical class labels, which are discrete and unordered. It is a two-step process, consisting of a learning step and a classification step.

Methods in Classification and choosing the best.

To choose a good algorithm for a problem, parameters such as accuracy, training time, linearity, number of parameters and special cases must be taken into consideration for different algorithms.

The first step in applying our machine learning algorithm is to understand and explore the given dataset. In this example, we'll use the Iris dataset imported from the scikit-learn package. Now let’s dive into the code and explore the IRIS dataset.

Before getting started, make sure you install the following python packages using pip.

In this snippet of code, we learn about the attributes of the IRIS dataset using a few methods in pandas. (eda_iris_dataset.py on GitHuB)

An algorithm is said to be a lazy learner if it simply stores the tuples of the training set and waits until the test tuple is given. Only when it sees the test tuple does it perform generalization to classify the tuple based on its similarity to the stored training tuples.

“Closeness” is defined regarding a distance metric, such as Euclidean distance. A good value for K is determined experimentally.

In this snippet, we give import k-NN classifier from sklearn and apply to our input data which then classifies the flowers. (http://knn_iris_dataset.py on GitHub)

Based on the given input, the machine predicted the both flowers are versicolor using k-NN. 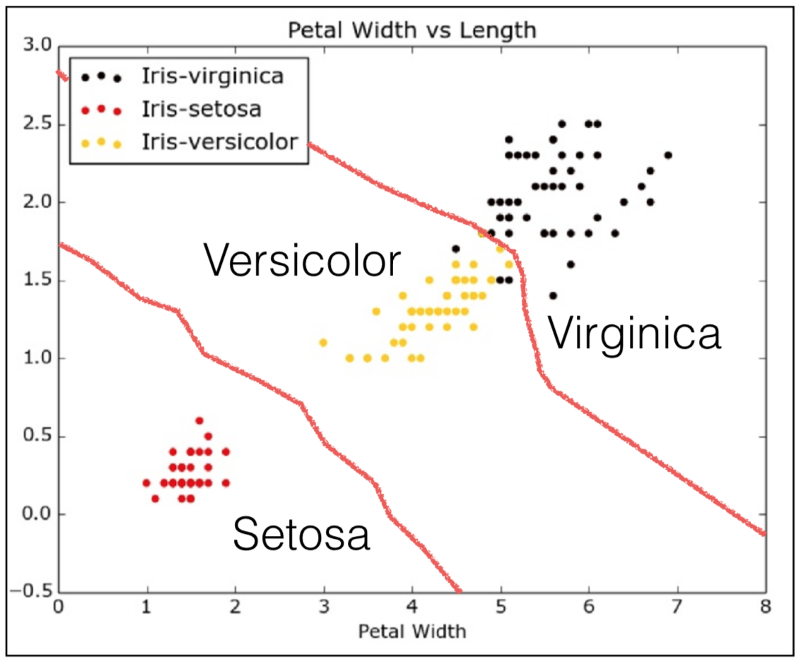 Regression is usually defined as determining relationships between two or more variables. For example consider you have to predict the income of a person, based on the given input data X.

Here, the target variable means the unknown variable we care about predicting, and continuous means there aren’t gaps (discontinuities) in the value that Y can take on.

Predicting income is a classic regression problem. Your input data should have all the information (known as features) about the individual that can predict income, such as working hours, education experience, job title and location.

Some of the commonly used regression models are:

where βo is the intercept, β1 is the slope of the line and e is error term.

With our dataset (X) and corresponding target values (Y), we use ordinary least squares to find a linear model we can use to predict a new y given a previously unseen x with as little error as possible.

The given data is split into a training dataset and a test dataset. The training set has labels (features loaded), so the algorithm can learn from these labeled examples.

The test set does not have any labels, i.e., we don’t yet know the value we're trying to predict.

We’ll consider one feature to be trained, apply a linear regression method to fit the training data and then predict the output using the test dataset.

Implementation of linear regression in scikit-learn

Graph between (diabetes_X_test, diabetes_y_pred) predictions will be continuous on the line equation.

Let’s say you’ve developed an algorithm which predicts the temperature of the following week. The temperature to be predicted depends on different properties like humidity, atmospheric pressure, air temperature and wind speed. But how accurate are your predictions? To find out, there are two important metrics to consider.

Variance is the amount by which the estimate of the target function changes if different training data were used. The target function $f$ establishes the relation between the input (properties) and the output variables (predicted temperature) and when a different dataset is used, the target function needs to remain stable without varying because for any given type of data the model should be generic.

In this case, the predicted temperature changes based on the variations in the training dataset. To avoid false predictions, we need to make sure that the variance is low. For that reason, the model should be generalized to accept unseen features of temperature data and produce better predictions as that of training data.

Bias is the algorithm’s tendency to consistently learn the wrong thing by not taking into account all the information in the data. For the model to be accurate, bias needs to be low. If there are inconsistencies in the dataset like missing values, low number of data tuples or errors in the input data, the bias will be high and the predicted temperature will be wrong.

Accuracy and error are the two other important metrics. The error is the difference between the actual value and the predicted value estimated by the model, and accuracy is the fraction of predictions our model got right.

For a model to be ideal, it’s expected to have low variance, low bias and low error. To achieve this, we need to partition the dataset into train and test datasets. The model will then learn patterns from the training dataset and the performance will be evaluated on the test dataset.

To reduce the error while the model is learning, we use an error function. If the model memorizes/mimics the training data fed to it, rather than finding patterns, it will give false predictions on unseen data. The curve derived from the trained model will then pass through all the data points. Nevertheless, the accuracy on the test dataset is low and this is called overfitting, which occurs due to high variance. On the flip side, if the model performs well on the test data but with low accuracy in regard to the training data, this is called underfitting.