Behind the Effort to Make Startup Boards More Inclusive

Diversity, equity and inclusion is a problem that the tech industry seems to talk a lot about, but hasn’t yet figured out how to fix. In an effort to bridge that gap, a group of powerful stakeholders in the Chicago tech ecosystem are taking a closer look at the issue with a hyperlocal focus and an eye toward actionable next steps.

Chicago’s existing tech workforce, much like Silicon Valley’s, is predominantly white and male. Women fill less than 10 percent of board positions, and African Americans and Hispanics comprise a scant 2 percent of board members in startups funded through the city’s venture ecosystem, according to data released by Chicago Blend in partnership with The Polsky Center for Entrepreneurship and Innovation at the University of Chicago.

The data, collected in the spring of 2019, reviewed the demographic makeup of 120 startups backed by Chicago venture firms, including 65 firms from Chicago, 22 from the Central United States, 14 East Coast-based startups and 18 West Coast startups.

Of the 120 startups participating in the analysis, not a single firm identified as having an African American or Hispanic CEO. Hispanics and African Americans occupy only 9 of 490 board seats at the companies. 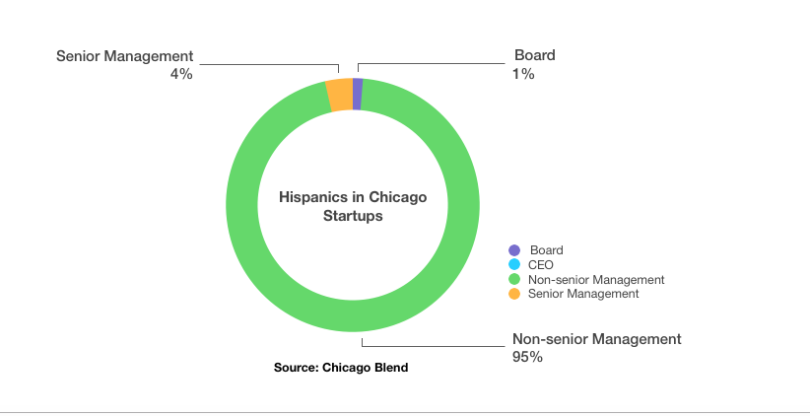 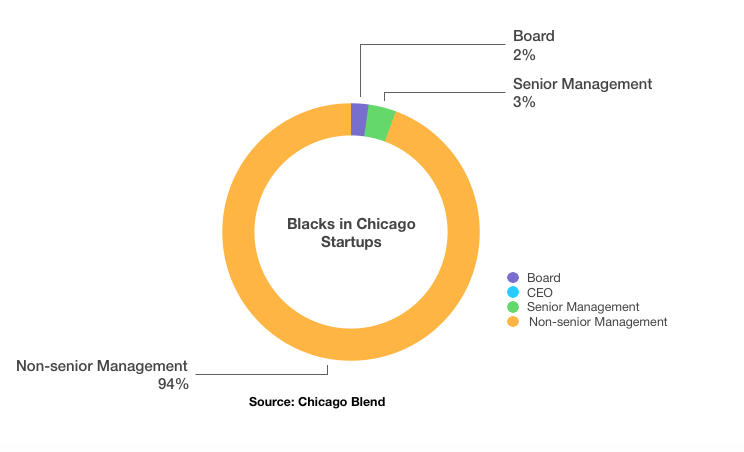 “There is no parity at any level,” said Lindsay Knight, founder of Chicago Blend, an organization launched by Chicago Ventures that aims to close the gap for women and minorities in the city’s tech ecosystem. “Upending decades of systemic segregation and discrimination takes time and is no easy task.”

Knight, who has been working with early-stage startups as director of platform at Chicago Ventures, says diversity is often an underlying theme when it comes to the support her firm offers to the startups it funds.

“Given that Chicago Ventures is fairly operational with our portfolio companies, we were having conversations about diversity, harassment and discrimination policies,” said Knight. “We realized that our peers and other VCs were having similar conversations. That’s when we knew Chicago needed an organization like Chicago Blend.” 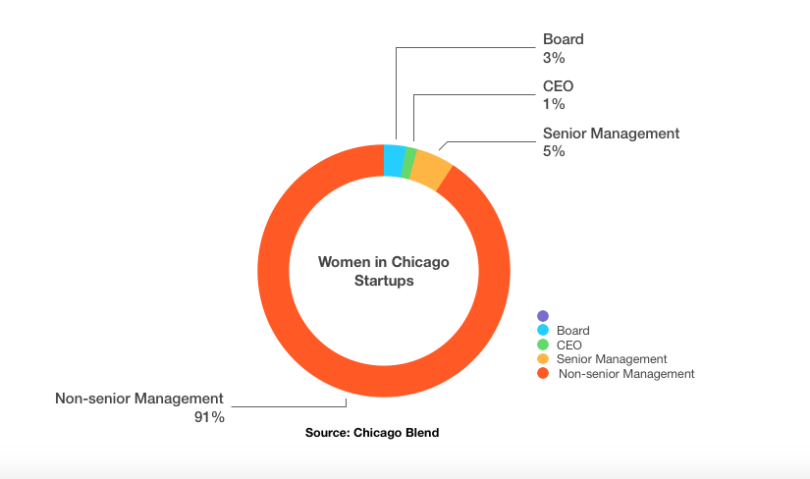 Building a pipeline of women and minority candidates

Placing women and under-represented minorities in leadership roles not only creates tangible value for startups and their investors but also boosts the local economy through job and revenue growth. “One of the primary goals of the project is to help Chicago’s tech ecosystem reflect the demographic makeup of the city,” Knight said.

A key component of the initiative is the BlendList, a register of qualified candidates who are available to take independent board seats in the Chicago ecosystem.

“It’s something that you hear a lot about. ‘Well, we would like to hire women, but we just can’t find women. We wanted to basically eliminate that excuse.”

“We as VCs are often in a position where we can help place an independent board member,” said Knight. “It’s something that you hear a lot about. ‘Well, we would like to hire women, but we just can't find women. We wanted to basically eliminate that excuse,” said Knight.

Chicago Blend is also partnering with recruiting platforms that focus on minority candidates.

Knight also said VCs and startups shifting from more traditional hiring practices and are rethinking what the ideal candidate’s resume looks like.

“VCs are being more creative when they hire. We see less and less firms looking for the standard two years of banking experience from a specific school. VCs are leaning more into candidates with operating experience who are great at building networks and brands. The business side can be taught,” Knight said.

Understanding diversity and inclusion.Why it matters.

As deputy state treasurer and chief investment officer for the Illinois State Treasury, Rodrigo Garcia directs the treasury’s $31 billion investment portfolio, $300 billion in banking operations and financial services, and a $4 billion agency budget with the aim to maximize portfolio returns and bolster the state’s economy.

Part of Garcia’s role is to manage $700 million available for investment in venture capital, growth equity and private debt investment firms through the Illinois Growth and Innovation Fund (ILGIF).

As of March 2019, ILGIF has invested $223.5 million in the city’s venture ecosystem, and more than half $118 million has gone to minority- and women-owned funds, according ILGIF’s website. In three and a half years, the fund has achieved a 13 percent internal rate of return.

Garcia says that while much of the rhetoric surrounding diversity and inclusion has centered around issues of equity and fairness, there is a significant financial upside to investing in minority- and women-owned businesses.

“Diversity, equity and inclusion are a part of our underlying investment thesis. We know that there is a definitive layer of value and profitability.”

“Diversity, equity and inclusion are a part of our underlying investment thesis. We know that there is a definitive layer of value and profitability, which is why we bank, contract and invest in minority- and women-owned firms,“ said Garcia.

Garcia points to a preponderance of research supporting the thesis that diversity in the workplace boosts key performance indicators.

Venture capital firms who apply for funds through ILGIF are evaluated on their commitment to diversity, equity and inclusion as well, Garcia said.

“We ask for commitments from the venture firm around diversity and inclusion at the fund level, within the boards of the companies they invest in, and in the leadership and underlying workforce of those startups,” said Garcia.

Garcia acknowledged that getting there takes work, however.

“It’s not just about finding the typical tech hire. They need to be willing to go outside of their comfort zone. This is why initiatives like Chicago Blend are so imperative.”

“It’s not just about finding the typical tech hire. They need to be willing to go outside of their comfort zone,” he said. “This is why initiatives like Chicago Blend are so imperative.”

Margaret Jastrebski, a thought leader in Chicago’s tech community, currently serves as the chief growth officer of Table XI — a custom software design and development company. Prior to her role at Table XI, she was the senior vice president of enterprise product at ShopRunner. With nearly twenty years’ experience in product management, Jastrebski said her experience shows that diverse teams make higher-performing teams.

"DEI is the right thing to do, but there are also very real outcomes such as a better bottom line for the company,” Jastrebski said.

Jastrebski said that, while she has been lucky to have mentors who helped her navigate the tech community, being a woman was challenging, which is why having more women and minorities in leadership roles is important.

“More often than not, I have been in rooms dominated by men. I have felt a sense of being an outsider and not fitting in. I have been able to overcome that, but I don’t think that everybody has the same opportunities.”

“More often than not, I have been in rooms dominated by men. I have felt a sense of being an outsider and not fitting in. I have been able to overcome that, but I don’t think that everybody has the same opportunities,” she said.

Jastrebski says that, if you index too hard in terms of hardcore credentials, you might be missing a candidate with a great skill set. Hiring a mother of four returning back to the workforce after 12 years was one of her best hires she ever made, she said.

“She came from a learners’ mindset, looked at numbers, tackled tough relationships, and brought empathy. She didn’t come with any preconceived notions about what her role should be,” Jastrebski said.

Flexible work models were also a key factor in making the placement successful.

“The paradigm of full time is broken,” Jastrebski. “She had the skill set and talent, and we worked very hard to be flexible. Ultimately, we got more value out of the product and for the clients with her being a part-time employee than we would have gotten from some full-time employees.”

Having a diverse leadership team can help create an environment in which employees feel more comfortable raising concerns, proposing ideas and asking for help, said Jastrebski.

“If you have a diverse team or workforce, but you don’t have a diverse leadership that knows how to create a sense of psychological safety, it can be a problem.”

“If you have a diverse team or workforce, but you don’t have a diverse leadership that knows how to create a sense of psychological safety, it can be a problem,” said Jastrebski.

1. Be patient in hiring. Being patient can be a big challenge — especially in the early stage, when putting up the numbers is important. Startups may struggle to see how diversity can have an immediate-term impact, but it’s important to consider what’s more important: immediate return or long term growth, she said. “There’s a difference between building the right team to build the right product or building a team to build a product.”

2. Take accountability. Leaders should open up the top-level conversation around DEI. One way to do that is to take control of the hiring process, instead of relying on recruiters to funnel candidates.

3. Follow the Rooney Rule.The Rooney Rule is a National Football League policy that requires teams to at least interview minority candidates for senior jobs. "Commit to interviewing at least one candidate from an under-represented group,” she said. “It forces you to broaden your network, and creates a conversation about diversity that may not have existed before.”

17 tech leaders talk diversity in tech.We're making progress, but the work is far from over.