Got a favorite app or website? Thank the UX designers who worked on them to make your digital experience as natural as possible.
Written byMae Rice
Mae Rice
Staff Reporter at Built In
Mae Rice is a former Built In staff reporter covering marketing and emerging tech trends. Formerly editor in chief at MarketerHire, she is currently a writer for the media startup Workweek.

When you check your social media notifications or enter your destination into a rideshare app, you’re interacting with a screen — but also, invisibly, with user experience designers.

These tech professionals, better known as UX designers, mapped out your experience long before you had it, structuring it to feel as natural as possible. That's their job: to craft easily navigable digital interfaces.

Doing so takes empathy and artistry. But how are those qualities applied on a day-to-day basis? We asked a couple of UX designers to give us a peek into their worlds.

Life of a UX Designer

Kim Dobe spent three years in UX design — first at digital agency One North, and then at bswift, an employee benefits software company — before transitioning into a UX research role. Maxi Granja works as a UX and UI designer at digital textbook service Redshelf.

Both agreed that UX design roles break down into roughly four components:

In terms of time commitment, though, the components aren't equal. Dobe says she spends up to 75 percent of her work hours on ideating, or conceptualizing new designs. Granja focuses mostly on designing and communicating.

UX design roles vary widely, and there are countless possible UX design specializations, like information architecture and communication design. That’s not to mention another possible path in the field: generalist. Especially on smaller UX design teams like Granja’s, every designer does a little of everything.

Both Dobe and Granja describe the UX design workflow as cyclical. On a given feature, user research spawns new front-end designs, evaluated through new user research, which in turn spawns newer designs, and on and on. UX designers often find themselves in multiple workflows simultaneously. Dobe has worked on as many as nine projects at once.

Below, a more detailed look at the four parts of UX design. 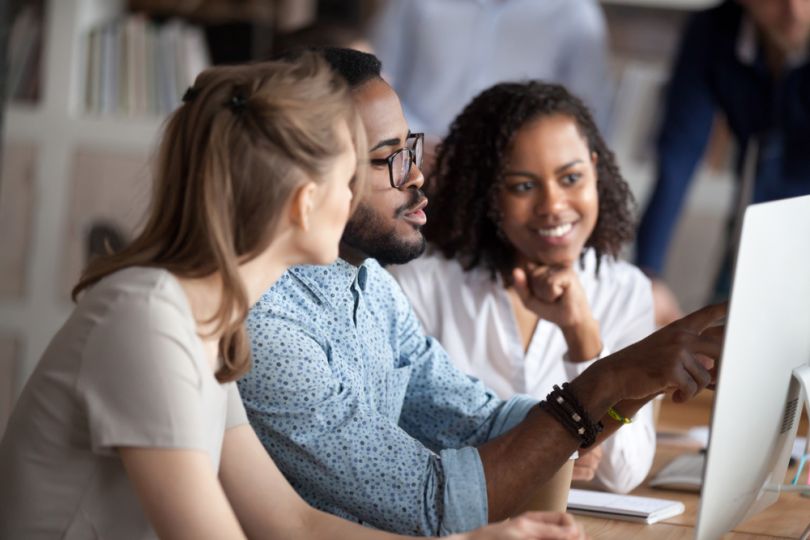 Dobe is now a full-time as a UX researcher, but she did some research as a UX designer, too—especially at the beginning of projects. The goal, Dobe says, was always "to really understand a user's needs, motivations [and] empathize with them in terms of enhancing a product or even creating a new product."

Also known as usability testing, user testing involves learning about the user experience by simply observing how users go about completing key tasks within an app or platform. The process can highlight points of confusion in a more granular way than an interview might.

UX designers "really get to know [users]," Granja says of the process.

Her user testing focuses on the features that stakeholders agree need feedback. Granja begins by laying out goals for testing, identifying the key interfaces to study — for instance, a homepage or a profile page — and the key learning objectives for each interface.

From there she designs the script. This is the standardized monologue UX designers read before a user test begins, which lays out ground rules and introduces the task. What that task is, exactly, varies by product. On Instagram, for example, it might be uploading a photo; on LinkedIn, it might be adding a new job to your resume.

Sometimes, as a "dress rehearsal" for a user test with consumers, Granja asks her coworkers to try out a new feature.

User research can also involve user interviews. Dobe, though, would never ask a user something as straightforward as, "What do you like about this product?" Instead, she and Granja often ask users about their experiences in the industry, completely separate from the products they're researching.

"It's the antithesis of asking people what they want," Dobe says. "It’s really an art."

Researching a grocery shopping app, for instance, she and Granja might ask how a user currently gets their groceries, as well as what goals and constraints influence the shopping process?

"We ask our users about their process, what problems they're currently facing, any solutions that they use," Granja says. 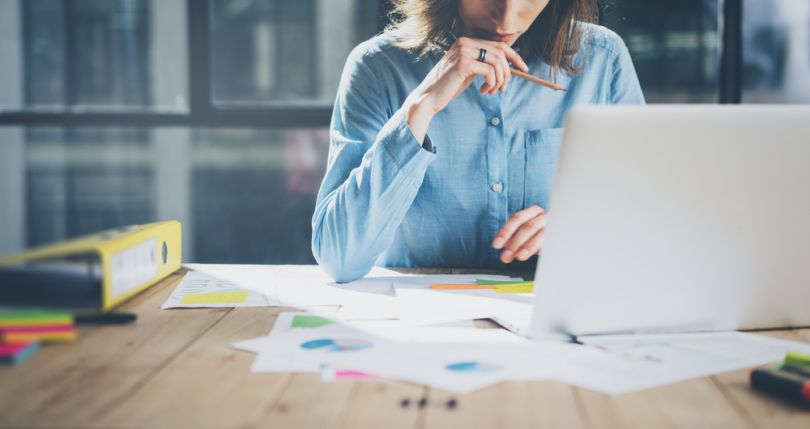 It might sound like daydreaming, but blocking out time for ideating is central to the UX designer's process — and the creative process in general. This is how research findings become design concepts.

Ideating consists of two phases. The first: research analysis, during which designers home in on concrete user problems. This can involve straightforward data science. In some cases, Dobe breaks a sample of users down into categories, or types, and storyboards out the typical user experience for each type. Along the way, she notes common "pain points" for each type—for instance, a final "purchase" button one type always misses.

Granja, for her part, usually synthesizes her research findings in a findings matrix: a table of problems and ratings of their difficulty levels and importance. Difficulty depends on the developer and designer horsepower a task requires; importance depends on how much the problem interferes with basic user tasks, like purchasing.

Once a UX designer has picked a problem to tackle, it’s time for the second part of ideating: brainstorming. What are all the possible fixes? What are the pros and cons of each?

This doesn't exactly involve pulling ideas "out of thin air," Granja says. UX designers draw inspiration from wireframes for their brand's other features to ensure the uniformity of user encounters. They also incorporate trends from the web at large.

"We don’t want to reinvent the wheel, right?" Granja says. "You don't want to make someone come in and relearn how to check out."

When Granja feels stumped, she browses Dribble and Behance for inspiration. But brainstorming doesn’t have to be a solo process. Both she and Dobe like to brainstorm with colleagues, talking through problems and jotting ideas on a whiteboard. In her agency job, Dobe sometimes looped clients in, too, inviting them to brainstorming (or "jam") sessions at which they collaboratively sketched out possible designs and voted on their favorites.

The ideating phase ends when a UX designer settles on a particular concept they want to move forward with, and the design phase begins. 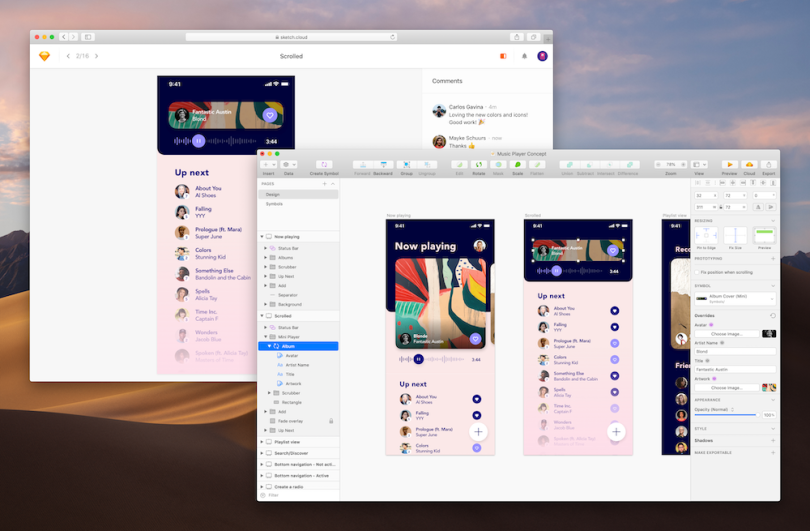 During this phase, a UX designer transforms a concept into a rough draft. How rough depends on the level of fidelity, or faithfulness, with which they’ve been tasked. A low-fidelity design, or wireframe, is a much rougher draft than a high-fidelity design, or prototype. The former is more like a blueprint or outline of "the structure of the site," Dobe says. The latter has some interactive features and fleshed-out visuals and is pretty close to a finished product.

UX designers typically focus on wireframes. When Dobe was a designer, she created hers using software like Axure and Sketch. (Here are some examples.) Basically, wireframing is a process of positioning logos, menus and buttons on highly-trafficked pages. Actual imagery remains minimal in this phase. It's more about indicating placement for later design phases and creating a layout that draws attention to the most essential information.

Granja also wireframes in Sketch, which she describes as a streamlined Photoshop. Because her job encompasses user interface design, or UI design — which isn’t unusual in the UX design world — she also fleshes her wireframes out into prototypes.

While prototyping, she often looks to the internal style guide. This document details a brand's look in terms of colors, spacing, and font, and its specifications can get very nitty-gritty.

The do's and don'ts of using the ubiquitous Facebook logo, for instance, give a sense of the level of detail. (Sample don't: “Don’t make the 'f' logo the most distinctive or prominent feature of what you're creating.") 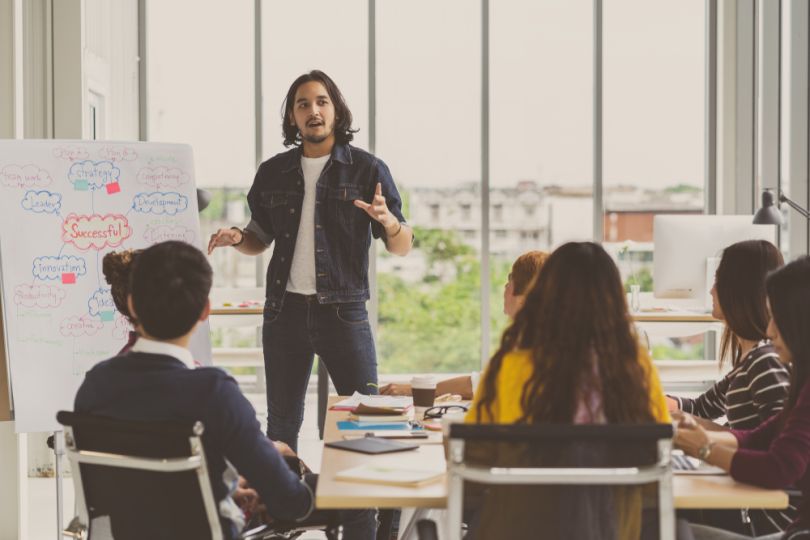 UX designers often have to present wireframes and prototypes to key stakeholders, which can include internal teams and external clients.

Presentations usually involve demonstrating how a new product will work, and justifying changes. Ideally, UX designers can trace features and formatting back to research and analysis. (Unfortunately, due to budget constraints, research is the element of the UX job most frequently streamlined or cut entirely, Dobe says.)

Communicating isn't just about finished designs, though. It’s a constant feature of this job, and every job. (There’s a reason an entire literature has sprung up on managing work emails.) For UX designers, specifically, "there's a lot of communication with developers to make sure that your ideas can be implemented in their timeframe," Dobe says. "They have a whole other set of priorities and obligations on their end."

To accommodate developer schedules, Granja usually makes two wireframes to discuss with them: one of the ideal design and one of a "happy medium" design that will be quicker to code.

UX designers don't just collaborate with developers, though. They routinely meet with product and project managers, and in agency roles, they meet with clients.

It's a lot of meetings. Ideally, though, a steady flow of conversation keeps everyone in the loop about whether a design is for mobile or desktop, which features are highest priority, and other key information.

Says Granja, "The common thread [through] every day is that I'm constantly working with several different teams."