While project managers focus on the technical aspects of delivering a change — such as budget, scope and timeline — change managers focus on the people affected.
Written byKevin Miller
Kevin Miller
Senior IT Management Consultant/Instructor at Delta Technology/Pluralsight.
Senior IT management consultant at Delta Technology and instructor at Pluralsight.

As we near the end of a tumultuous year that has forced billions of workers to deal with major upheavals to the way we do business, I’ve been thinking about what it means to navigate large-scale change effectively.

In the field of project management, we’ve codified an official rubric for how to get things done on time and within budget. However, the field of change management — how we lead individuals and teams through transformations in the way they work — is still a relatively unknown and definitely an under-appreciated discipline. And it’s one that I believe is poised for a major shake-up.

But first, some background on how we got here: I estimate about a quarter to a third of all roles within IT are non-technical. By that, I mean those individuals who do not write or test code, perform system administration, implement security, resolve technical issues or set up the physical equipment. This group’s main job is to work with other people. It includes all levels of people management, business analysts, project managers, change managers, administrative assistants and so on.

When it comes to non-technical IT certifications, colleges and universities offer MBAs and other post-graduate certificates for managers and senior leaders, and the International Institute of Business Analysis offers various options for business analysts. But standing on top of the proverbial non-technical certification mountain is the PMP for project managers, offered by the Project Management Institute. It is the authoritative certification for project managers in every industry and has more than one million active credential holders.

“PMP remains the gold standard for project management certification regardless of industry, as it offers employers and teams alike confidence of an individual’s experience in project environments and comfort with project-oriented principles.”

—Casey Ayers, author of the entire series of courses in the PMP learning path at Pluralsight

The Gold Standard and the Newcomer

Reaching a million active credential holders didn’t happen overnight. In fact, the first group of 43 people obtained the PMP certification in October of 1984, more than 35 years ago! There was a modest but steady incline in total active certification holders for a few years until 1999 and 2000, when the number of active holders tripled. By 2006, the number of active credential holders grew large enough to make the PMP synonymous with the project management discipline. 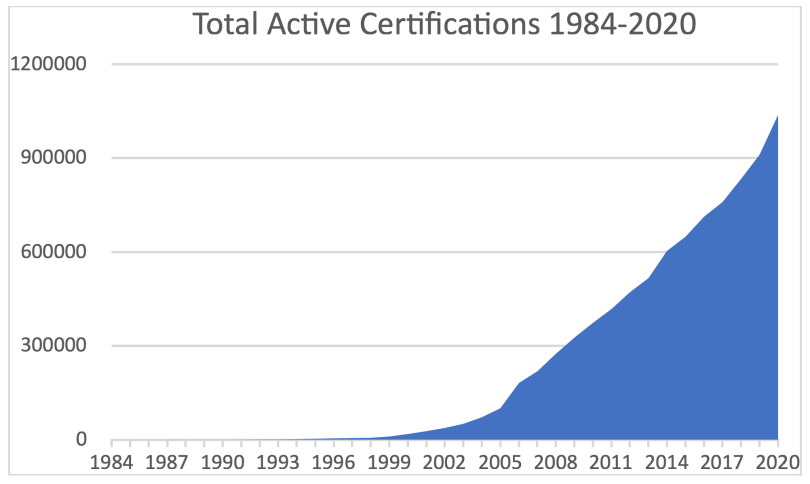 I believe we are now in the early stages of the next PMP: By the end of this decade, I expect the title of Certified Change Management Professional (CCMP) to become the de rigeur qualification to earn. The organizational change management discipline goes hand-in-hand with the project management discipline. While project managers focus on the technical aspects of delivering a change — such as budget, scope and timeline — change managers focus on the people affected by the change. Project managers can deliver a new system that is good, fast and cheap, but it’s worthless if no one uses it. This is where change managers can help.

The non-profit Association of Change Management Professionals, or ACMP for short, was formed in 2011. In 2014, it published The Standard for Change Management. Just two years later, more than 300 people were the first to earn the CCMP credential. In 2020, in just its fifth year of existence, the number of active CCMP credential holders surpassed 1,000. By comparison, the PMP didn’t reach the 1,000 mark until its ninth year.

I believe the reasons for expedited growth when compared to the PMP are threefold:

Will the CCMP Survive or Fade Away?

One might think that only a thousand CCMPs translates to little value, while a million PMPs translates to high value. While the PMP is certainly still valuable, I am going to argue the CCMP is even more valuable — one big reason is that possessing the PMP credential no longer enables a candidate to stand out from the crowd.

“The PMP has become ‘table stakes’ for project managers. This is a poker term which translates to project managers needing the PMP just to have a seat at the table — or in this case, consideration for an interview.”

By contrast, there are very few CCMPs in the candidate pool and even fewer candidates with both the PMP and CCMP. Over time, the popularity of the CCMP will increase as more people learn about the discipline of managing organizational change, its best practices and the certification itself. This will drive demand for candidates to possess it.

I’m also seeing more companies implementing change management offices to complement their already existing project management offices. In smaller organizations that don’t have a budget for these offices, hiring managers are still seeing the value of possessing both skill sets, and are beginning to seek out project managers who can also perform the change manager role, and possess both the PMP and CCMP credentials.

Consultants are also beginning to add this credential to their resumes in an attempt to differentiate themselves in the large sea of PMPs. This leads to an altered sales pitch to organizations. Even if the consultant is not hired, the sales pitch often leaves its mark and plants the seeds of awareness in a particular skill set.

Get in on the Ground Floor

The CCMP is here to stay, and I anticipate a surge of new credential holders over the next decade as awareness of the change management discipline grows and the demand for more change management resources increases. Since the CCMP is an industry-recognized certification, just like the PMP, the journey is not a fast one, which weeds out those without enough experience, knowledge, or desire. But with only just over 1,000 credential holders at the time of this writing, the reward can be great for those who get in on the ground floor.

I’ve created an online course called Change Management: Getting Started for those who are interested in learning more about the change management discipline and the CCMP certification process.

Why should I get certified?

Why should I hire certified candidates?

Certifications not only show a proven knowledge and proficiency in a discipline, they also show the willingness and effort to go above and beyond, and the ability to set a goal and commit oneself to obtaining it.

Is the PMP a prerequisite for the CCMP?

No. While the project management and change management disciplines certainly overlap — and anyone possessing both will certainly benefit from proving their expertise in both fields — obtaining just the CCMP is perfectly acceptable for those focusing on relationships and helping people adopt a change, rather than the details of delivering the change.

Are all certifications created equal?

Third-party certification exams focus on their proprietary tool or process, are shorter and easier to pass and do not have any prerequisites such as experience or education. The exams are usually given at the end of a brief training class, are not rigorously monitored and do not require renewal to remain active. The results are usually not stored in an online registry that allows someone to verify your credential.

Industry-recognized certifications focus on a body of knowledge within a discipline, but not a particular set of tools or processes. These exams are proctored, much longer and more difficult to pass, since the questions are researched and require one to know how to apply the knowledge. The credential expires if not renewed in a certain timeframe by accumulating enough either professional development units (PDUs) or continuing education units (CEUs). The results are also stored in an online registry for verification purposes. The CCMP falls into this category.

More Great Ideas From Kevin MillerThe 3 Hammers of IT Management