Choosing the Right Technology for Your Sales Stack

Starting with spreadsheets, pen and paper, Kevin Wisniewski was tasked with picking Onna’s sales tech stack. Here’s how he narrowed down the options.
Written byBrian Nordli
Brian Nordli
Associate Editor at Built In
Brian Nordli is a Built In associate editor for the expert contributor network, where he edits articles on data science, software engineering and more. He has previously worked as a staff reporter for the Las Vegas and Reno Gazette-Journal.

Before Kevin Wisniewski joined Onna, the company’s sales technologies included pen, paper and Google Sheets — for tracking pipeline. Of course, the company only had one sales representative, so there hadn’t been any need to get high tech with its process. But with more salespeople on the way, Wisniewski was hired to lead its sales operations and help the company build its sales tech stack.

Wisniewski has been in sales for more than a decade, during which time he’s witnessed the field’s tech evolution. When he started, sales tech meant some combination of proprietary CRMs and Excel spreadsheets with cold calling and email. Today, there are more than 950 sales tools available to automate emails, track outreach, collect data on communications, close deals and more.

Having enough data and resources isn’t the problem anymore — it’s choosing the right tech that’s the issue. Picking the wrong one or onboarding it incorrectly can overwhelm salespeople with data or clog the pipeline with repetitive tools.

“There is so much overlap in terms of functionality, and I want to make sure that I'm not just buying tools for the sake of buying tools.”

To avoid this, Wisniewski mapped out each phase of the sales process — from attraction to close — to help him visualize what tech should fill out their stack.

“There’s definitely such a thing as tool bloat, and I think a lot of companies suffer from that,” Wisniewski said. “There is so much overlap in terms of functionality, and I want to make sure that I’m not just buying tools for the sake of buying tools.”

When Wisniewski joined, the company had just selected Salesforce as its customer relationship management platform. His role was to build out the software suite and add tools that could integrate with it to help his team scale and improve efficiency.

He targeted three areas of the sales process: lead generation, outreach and deal closing, where he saw his representatives lose the most time through inefficient practices. Within his first week he was demoing software that he’d introduce to his team.

Here’s how Wisniewski picked out the tools to help Onna scale and grow it’s sales pipeline:

Start at the top of the funnel

First on Wisniewski’s sales technology wishlist was an engagement tool that could replace the pen-and-paper tracking system its sales representative had been relying on.

Any new tool needs to represent a clear case for its return on investment, Wisniewski said. In this case, adding software that could automate daily tasks like scheduling outreach, auto-generating emails and adding customers to its sales pipeline offered an obvious upgrade.

While Wisniewski had experience using most of the major engagement platforms, it was critical that the one he picked made sense for Onna’s salespeople, and that they’d feel comfortable with it. To find that fit, he follows a similar process for all tools: he canvasses his sales team and surveys people in his sales network to identify the top tools. Then he demos them.

He eventually landed on four different engagement tools, which he tested for efficiency and ease of use. From that list, he whittled the choices down to either Outreach or SalesLoft.

Out of those two, SalesLoft stood out. It provided a clean user interface and a streamlined suite of services that fit his small, but growing, department’s needs. Until they established more sales processes, his team didn’t need the additional tools that Outreach provided, he said.

Onna worked with SalesLoft to onboard the platform and integrate it with Salesforce. Wisniewski then held a training to get everyone familiar with the tool, just as he does for all new platforms.

“It allows each rep to scale their ability to reach out to people. The biggest ROI is just the effectiveness and efficiency aspect.”

Through SalesLoft, Onna’s salespeople have been able to establish a pipeline of ideal customer profiles that included heads of IT, junior legal teams, general councils and HR, and create a customized drip campaign for each of those customers. It’s also allowed him to collect data on what messaging is and isn’t working, and to see what his sales representatives are doing day in and day out.

“It allows each rep to scale their ability to reach out to people,” Wisniewski said. “The biggest ROI is just the effectiveness and efficiency aspect.” 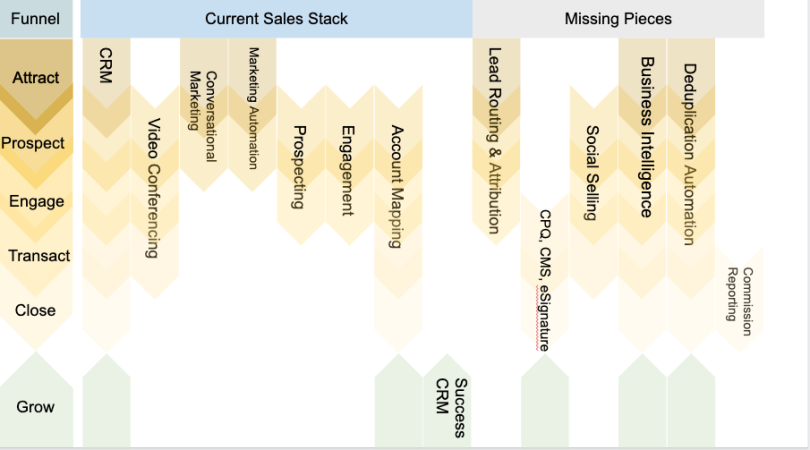 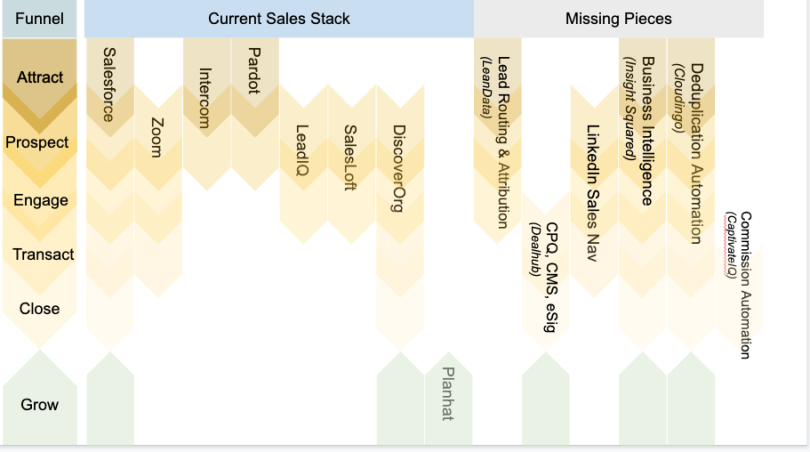 When Wisniewski began looking into prospecting tools, he asked a sales representative how many hours he spent searching for customer contact information. The answer shocked him.

“He said he spent four or five hours a day, which was just insane,” Wisniewski said.

It was obvious to Wisniewski that if Onna wanted to scale its sales process, it would need a prospecting tool to give salespeople more time back on their calendars to actually sell. Once again, Wisniewski demoed different lead generation apps including ZoomInfo and LeadIQ.

“It makes sense not just from an efficiency standpoint but from a happiness standpoint.”

While both would work for Onna’s purposes, LeadIQ operated as a lightweight Chrome plugin that provided more personalized prospecting options. If a salesperson navigated a company page on LinkedIn, they could select the people whose contact information they would like to pull into Salesforce, whereas ZoomInfo collected and ported over contact information for every employee.

Since Onna’s data services are geared more toward IT teams, it was important to have that ability to single out the appropriate contacts to whom they’d sell, Wisniewski said.

“It makes sense not just from an efficiency standpoint but from a happiness standpoint,” Wisniewski said. “Our reps feel a lot more comfortable being able to control who they get to attach to the account.”

Since LeadIQ attaches as Chrome extension and auto-fills the selected contacts into Salesforce, it’s helped save sales representatives hours of work each day, Wisniewski said.

Inside a Sales Accelerator:Bolstering Tech Diversity Isn’t Just About Coders

Look for ways to streamline processes farther down the sales funnel

With a lot of focus on adding tools to the beginning of the sales process, Wisniewski consulted his sales funnel chart and noticed a gap when it came to closing deals.

“We just didn’t have any tool to cover that contract automation piece,” Wisniewski said. “That’s when I started digging around and said, “Hey, this is a huge hurdle for us to get over.’”

When a salesperson closed a deal, they’d have to put together a contract proposal quote in Word. From there, the rep would negotiate terms with the customer, make edits to the document and send it to either Wisniewski or Onna’s vice president of revenue, who might then pass it along to the legal department. That back-and-forth exchange was not only time-consuming but also expensive with legal fees, Wisniewski said. If they wanted to scale, they’d have to streamline it.

Enter DealHub. Wisniewski shopped around demoing six other deal platforms, but he said DealHub stood out for its ability to dynamically populate contracts. The tool allows reps to negotiate deals from a list of pre-approved clauses and make those edits to the contract. It also prioritizes readability and an e-signature feature to make signing easier. All of that information is then populated into Salesforce.

Wisniewski said he’s in the process of onboarding the platform and will soon roll it out to his team.

“The worst thing you can do is to buy a tool that doesn’t work or the reps don’t like, and then you have to go through this process all over again.”

With so many new tools, Wisniewski acknowledged that it can be difficult for teams to adjust. One salesperson came to him expressing frustration that he didn’t know what tool to use when. To make it easier, Wisniewski said they have been in the process of building out a sales playbook that outlines the process.

It also helps to gather team feedback before making any purchase, he added. With 5,000-plus tools available to automate every part of the sales process, it’s more important than ever to research and find the right one.

“Just do your preliminary research,” Wisniewski said. “The worst thing you can do is to buy a tool that doesn’t work or the reps don’t like, and then you have to go through this process all over again.”

More on SalesWe’ve Got an Entire Section About That