Flexport’s Fabien von Heyden moved to Amsterdam two years ago. Here’s how he learned how to sell in a new market.
Written byBrian Nordli
Brian Nordli
Associate Editor at Built In
Brian Nordli is a Built In associate editor for the expert contributor network, where he edits articles on data science, software engineering and more. He has previously worked as a staff reporter for the Las Vegas and Reno Gazette-Journal.

Before Fabien von Heyden packed his bags to start his new role as a Flexport sales rep in Amsterdam, he tried to do everything he could to prepare for the experience.

He reached out to his colleagues in the logistics technology company’s Amsterdam office for tips, tapped his own network of peers for advice and read up on the Dutch market. While their tips would pay dividends down the line, none of that helped him during those first couple weeks.

“I tried to mentally prepare myself for how I might have to adapt, but nothing prepares you more than the real thing,” von Heyden said. 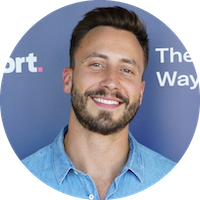 Von Heyden joined Flexport in 2017, and had worked as a sales development rep in its LA office for two years before moving to Amsterdam. He had always had his eyes set on international opportunities both for the personal experience and the professional, so when one became available, he leapt at it. Still, that didn’t mean the transition was easy.

For many salespeople, making the leap to international sales can be an intimidating experience. In addition to moving away from family and friends and adjusting to a new culture, selling in a new country often requires re-learning how to do the job. Sales tactics that worked in LA or Chicago don’t necessarily translate to deals in Tokyo or London.

“It provides you with that development opportunity to change certain things that you were doing before and make you more self-aware about your overall sales skills.”

But there are advantages too. While it took von Heyden time to adjust, he credits the experience for pushing him outside of his comfort zone and helping him develop new sales tactics. Since moving abroad, he has also received a promotion from initiating deals to a closing role and accepted a position at Flexport’s London office.

“It provides you with that development opportunity to change certain things that you were doing before and make you more self-aware about your overall sales skills,” von Heyden said. “It makes you a better salesperson in the long run.”

We spoke with von Heyden about the preparation he did to succeed in international sales.

One of the most important steps von Heyden took to prepare for his new job in Amsterdam was to pick the brains of his colleagues.

Unlike moving to a new city in the United States, transferring abroad meant adjusting to a new culture, a new way of doing business and new regulations.

In particular, he learned that Dutch companies have more trust in freight forwarders compared to U.S. firms. He also adapted to a different operational landscape that influences logistics. In the Netherlands, there’s an inland barge system that connects to the port of Rotterdam and an extensive railway that connects to China, to go along with the usual sea, air and trucking options.

While few things could prepare von Heyden for the first week on the job, the advice he gathered from his colleagues and peers prepared him for some of the changes to his sales process he’d have to make to succeed in a new country.

“The most important thing is how the industry might be different than what I was used to, so that I could start to understand how I might have to change my approach to adapt to that.”

“The most important thing is how the industry might be different than what I was used to, so that I could start to understand how I might have to change my approach to adapt to that,” von Heyden said.

He also reached out to as many people with international experience in his personal sales network as possible. Since selling internationally was different than anything he had ever done before, their advice helped him mentally prepare for his new role.

Checking In7 Ways to Make Your Sales Follow-Ups More Effective

When it comes to transitioning into an international market, it can be tempting for a salesperson to think they need to completely revamp their sales process to succeed. After all, every market has a different sales culture, and it’s natural to want to fit in and succeed right away.

Von Heyden felt a similar temptation upon arriving in Amsterdam. Based on his research, he knew that it was important to not be too “sales-y” on calls in the Dutch market. While he had some notion that that meant he shouldn’t be as aggressive pushing a sale, figuring out what that looked like in practice proved less clear.

“One of the big pieces of advice I received was to not overreact and try to recreate my whole process,” von Heyden said. “That’s something that a lot of people might do when they get to a new place, they think they have to relearn everything they did before.”

Rather than try to change everything at once, von Heyden used the first few weeks to learn on the job. He started by doing everything he did before in LA, and then tweaked his process as he listened to recordings and gathered feedback from his colleagues and network.

“One of the big pieces of advice I received was to not overreact and try to recreate my whole process.”

The trial-and-error process allowed him to figure out what “don’t be too sales-y” looked like for him. His adjustments included listening more and easing into the sale rather than diving right in like he would in the U.S. Now, when he gets on a call, he makes sure he understands the customer’s company, their pain points and their challenges before he introduces Flexport and tells them what they do.

“You’re flipping the conversation around from telling somebody what we do and hoping they see value in it to uncovering whether there’s value in the beginning,” von Heyden said. “That was the main switch in my approach, but it’s also something all good salespeople do.”

While moving to a new country can feel like a major life change, there’s often a moment after adjusting to the city where it becomes your new comfort zone. As a result, it can be easy to miss out on new international opportunities within the company, von Heyden said.

“Once you make that your comfort zone, it can be equally hard to do it again — especially if you found success,” von Heyden said.

“Step out of your comfort zone, do your research, leverage your network, and, most of all, be open and adaptable. If you keep grinding, you’ll be able to find success.”

Since von Heyden was interested in experiencing new markets within Flexport, he heeded the advice of a colleague and remembered to keep pushing his boundaries. Rather than feel obligated to stay in Amsterdam, von Heyden leapt at the opportunity to move to the company’s London office.

For him, that challenge of learning a new market is everything he wanted out of his international experience. It’s taught him about other markets Flexport operates in and how to adapt his sales process.

“I would more than encourage salespeople to take opportunities like this if they can,” von Heyden said. “Step out of your comfort zone, do your research, leverage your network, and, most of all, be open and adaptable. If you keep grinding, you’ll be able to find success.”