Tech Salaries Will Increase in 2017: Here’s Why

Despite what Jay-Z and Jermaine Dupri would have us believe, money is indeed a thing, and tech recruiters will have to offer more of it to hire top candidates in 2017.

We’re seeing strong signs that tech salaries are poised to increase in 2017, placing even more pressure on recruiters already navigating a competitive landscape. What gives us license to make this claim? A little data can do wonders to frame a conversation, so let’s start by looking at the numbers.

RECRUITERS ARE OPENING THEIR WALLETS

In our recently released 2017 State of Tech Recruiting report — sourced via survey responses from hundreds of tech recruiters at startups and tech companies across the country — 53% of respondents indicated they plan to increase salary offers in 2017. 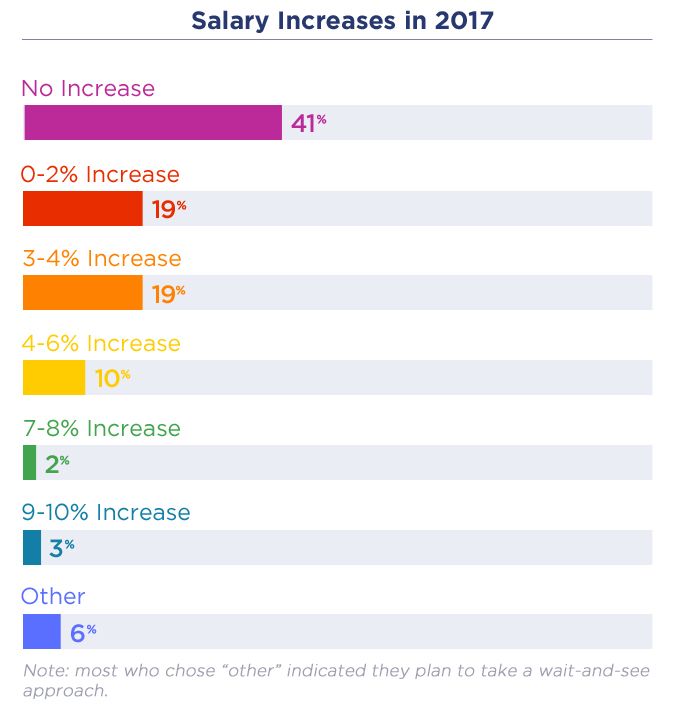 Planned increases run the gamut from standard cost-of-living adjustments to significant hikes — as much as 10% in some cases. Additionally, another 6% intend to take a situational approach, basing salary offers on market conditions at the time of hire. All told, roughly 60% of recruiters indicated an existing plan or willingness to offer more cash to hire top candidates in 2017. This will make life difficult for the 40% of recruiters who are unwilling or unable to match these higher offers.

So, we have evidence tech salaries will be increasing in 2017, but that still doesn’t tell us what’s driving this behavior. For that, we have to dig a little deeper.

Attract Passive Candidates. Build Your Talent Pipeline.Hire With Built In

A COMPETITIVE LABOR MARKET IS INCREASING WAGES ACROSS THE BOARD

It’s been a long road to recovery following America’s latest recession, but in many respects, the nation’s economy is back on firm footing. The national unemployment rate, the most publicized barometer of economic health, finished 2016 at 4.7%, capping off 75 consecutive months of job growth.

The news is not so rosy when it comes to wage growth, however. Wages fell during the recession, which is typically the case, but they haven’t bounced back like analysts expected. Many companies have elected to fill the gap with a host of non-financial incentives, which, while appealing to some candidates, are much easier to eliminate in lean times. Others chose simply to do nothing, capitalizing on the weak labor market and corresponding shortage of open positions. As a result, wage growth remained low — around 2% per year, on average — through most of the recovery.

Things are starting to change. A stronger labor market combined with a shrinking pool of available candidates is forcing many companies to increase salary offers, and we’re starting to see the upswing. According to the Employment Situation Summary, December saw average hourly earnings increase by 2.9% year-over-year, and there’s hope that trend will continue.

This isn’t to say economists are entirely pleased with our current situation. According to the Economic Policy Institute, nominal wage growth should be in the 3.5% - 4% range, which is significantly higher than what we’re seeing. But given the glacial pace of wage growth over the past few years, the recent uptick is welcome news for American workers.

This helps to explain why tech salaries will increase this year, but it isn’t the only factor.

This high level of demand is further burdening an already overtaxed candidate base — 72% of tech recruiters report a shortage of qualified candidates as a primary hiring challenge — and leading to natural macroeconomic consequences. With the demand for tech talent increasing while the supply remains relatively flat, companies willing to offer higher salaries will do so, increasing the pressure on rival firms to match these figures and adding to the upward momentum.

PLAN AHEAD TO GET AHEAD

Wage growth will be a challenge for some organizations, but it’s a natural part of a healthy economy and something every company must be prepared to address. It will be more important than ever for recruiters to maintain open and honest lines of communication with their leadership teams, making sure the powers that be understand the competitive landscape and what it will take to hire and retain top talent in 2017. For that insight, download our 2017 State of Tech Recruiting report.