He tweets about Fast’s marketing strategy as he rolls it out.

The marketing world isn’t known for transparency. It’s known for NDAs, which make it hard to figure out which marketers do what for which companies — let alone why. 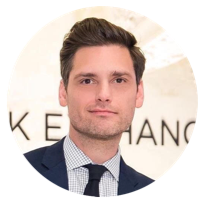 But it’s easy to figure out who’s behind the social accounts for freshly launched e-commerce startup Fast: it’s marketing guru Matthew Kobach (left). He shares the “why” behind his work, too, routinely tweeting about Fast’s content strategy from his popular personal Twitter account.

“I don’t know why more companies don’t do it,” he told Built In. “It’s almost like I’m an influencer advocate for Fast, but I’m an employee.”

What is Fast, exactly? The company launched its flagship product earlier this month: one-click checkout infrastructure that any e-commerce retailer can install on its site. (Early adopters include BigCommerce retailers and Stripe merchants.)

For customers, it’s a slick experience that only requires a password once per device — and for digital storefronts, it’s an alternative to baroque abandoned cart email automations. It’s a bit like Amazon’s one-click purchasing, but for the rest of the internet.

From the beginning, Fast’s co-founders Domm Holland and Allison Barr Allen were committed to “building in public,” or transparently sharing Fast’s story and strategy in real time.

When Kobach came on board as Fast’s director of content marketing, he took the concept to Twitter.

From the Fast Twitter account, Kobach recently shared a thread about some launch-day bugs, which went into surprisingly granular detail about what was going wrong: form field errors, postal code issues, etc.

Meanwhile, from his personal account, Kobach has pulled back the curtain on Fast’s marketing strategy. He’s let people in on Fast’s pre-launch Twitter strategy, which focused primarily on raising awareness and impressions (through Hamilton GIFs, among other things). He’s also shared that, on Instagram, the company has focused on swag giveaways, oddly satisfying videos and a forthcoming campaign inspired by vintage MTV branding.

Kobach said it feels natural to talk about Fast’s marketing on his personal Twitter: more than 75,000 people follow him for his marketing acumen, and sharing strategy thoughts with them raises awareness of Fast “in a way that doesn’t feel like I’m selling,” Kobach said.

Though Kobach still doesn’t have time to share “absolutely everything” going on behind the scenes, and although some specifics remain proprietary, “we’re sharing significantly more than a normal company would,” he said.

What constitutes “normal” is changing, though. Could transparency be marketing’s new normal?

The Power of Letting Consumers In

If Fast’s launch is any indication: yes. Kobach “couldn’t believe” the energy around launch day, given that Fast’s product is ultimately a payment process.

“It’s not really the most exciting thing if you strip away all the marketing,” he said.

In other words: The marketing worked. Personally, as one of Kobach’s followers, I was invested in the launch; getting a glimpse of behind-the-scenes considerations (and budget constraints) made Fast feel like the protagonist in a Coach Carter-style underdog story.

I wasn’t alone. Social media was ablaze with commentary. Demand for Fast hooded sweatshirts “blew my mind,” and it’s a blessing from a marketing perspective as well as revenue one. When people wear the hoodies, they essentially become walking Fast billboards.

“I wear [mine] out in public and people asked me about Fast,” Kobach said.

Even before he started at Fast, Kobach knew marketing that relied on transparency and employee influencers could make a major impact. He had done something similar at the New York Stock Exchange, and it worked.

It all started with Snapchat. Kobach can’t remember the exact date — maybe 2016? — but the social media company was poised to IPO, and the NYSE wanted to be the exchange it went public on.

But first, to woo Snapchat, the NYSE started an account on the social platform. At the time, Snapchat users couldn’t upload outside content; account-holders had to shoot everything through the app. That meant there was no way to post highly produced branded content. Kobach, who ran the account, had to create every post, end to end, by himself.

He quickly learned that pictures of the stock exchange’s floor looked dull. When he conducted quick-hit video interviews with superstar CEOs and other celebrities, they performed better. In fact, they performed very well.

There was resistance to these videos at first, though. Leadership wondered why Kobach’s Snapchat videos weren’t higher quality.

To him, though, that was the point. “The lo-finess of it was what made it interesting,” he said. “When it’s me and a phone, it feels spontaneous. It feels like [the interviewees are] a little unarmed.”

The lo-fi quality also made the NYSE videos fit in with organic Snapchat content, which boosted engagement. Ads that don’t look like ads attract more attention, as marketing experts from strategists to Instagram influencers routinely tell us.

“If it looks like an ad right off the bat, they just tap past it,” Kobach said. Whereas something that looks organic, “you get [viewers] for that extra two seconds, maybe.”

Kobach’s Snapchat videos grew more and more popular. The NYSE began posting them to its other social channels, and Kobach became a kind of relatable, everyman social media host for the exchange, as well as a more traditional social media manager.

Today at Fast, Kobach offers followers even more transparency. At the NYSE, he let followers into the physical space of the trading floor; at Fast, he lets them into the even more private world of internal operations and strategic decision-making.

It also feels like your friends made it. Your friends you’ve never met, but still.

The Pitfalls of Letting Consumers In

Is transparent marketing like Fast’s going to work for every company? Not necessarily, Kobach said. Legacy brands, especially, have very different marketing needs than nascent startups like Fast.

Coca-Cola, for instance, doesn’t really need awareness. It doesn’t need advertising at all — the company has enough market share and momentum that it could probably take a year off advertising and “be fine,” Kobach said.

For Coca-Cola, a focus on organic social impressions just might not have the same impact it does for Fast. Kobach could grow awareness of Fast 10x with his current social approach; some legacy brands are so big, 10x growth in awareness isn’t even possible for them anymore. Awareness metrics may not even be core KPIs for them.

“So they don’t see the value in it,” Kobach said — “it” being his transparent approach to social, and his employee-influencer role. But they do see the risks.

For one, it’s “bold” to make an employee the face of your company’s social channels, especially when it’s not what you’ve done historically, Kobach said.

It breaks continuity. If the face of your social channels leaves for a new job, that breaks continuity again. But you can always find a new face, he said — and turnover offers a chance to grow. (Just as continuity creates a sense of safety, disruption creates excitement.)

For another, it makes the “face” feel a bit like a spokesperson for the company — a public figure and an extension of the brand. Spokespeople can become PR liabilities or targets for online harassment, though then again, so can marketers who aren’t spokespeople.

Transparency around strategy presents a whole new set of risks. Competitors could steal your strategies once you share them — though worrying about that is “short-sighted,” in Kobach’s opinion. Marketing is done in public, and all marketers are inspired by one another.

Moreover, social media marketing isn’t a science; it’s an art, he says, in that different things work for different companies. There is no single, optimal strategy to steal.

Ignore these trends at your peril. They’re not even new, Kobach noted — TV has long been full of spokespeople, like Progressive’s Flo, or Geico’s cavemen.

“I just don’t know why you wouldn’t do it on social media,” he said.

Read More About MarketingBrand Trust Is Crucial. So How Do You Earn It?