What Is Banner Blindness? Does It Mean Banner Ads Are Doomed?

Between banner blindness and competing digital ad formats, they’re in a tough spot.

Close your eyes and try to remember the last digital banner ad you saw. What did it look like? What was it selling?

If your mind is blank, you’re in the majority — 86 percent of people can’t remember either. Thank banner blindness.

It sounds like a medical condition, but it’s really a habit many of us have developed to conserve our time and attention. We selectively ignore anything that looks like an ad on a webpage — even when it contains information we need.

This phenomenon dates back to at least 1998, when a team of usability researchers, led by Jan Benway, published a paper titled “Banner Blindness: Web Searchers Often Miss ‘Obvious’ Links.”

They ran a fleet of UX experiments, and found that, when users sought information on a web page, they succeeded in finding it via dropdown menus 94 percent of the time. When it was highlighted in a bright red, rectangular banner, on the other hand, they found it only 54 percent of the time.

Banner ads fared even worse than the average banner graphic; when a banner ad unrelated to participants’ objectives in the study appeared on a web page, only 20 percent of participants recalled seeing an ad at all. 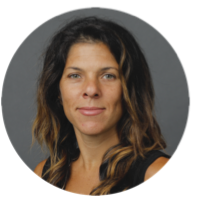 This data was collected in an experimental setting in 1998 though. Are people blind to banner ads in real life today — or have advertisers found a way to make banners pop?

We asked Meredith Vona (left), VP of digital media strategy at Cooper-Smith. She’s worked in media buying since she graduated from college in 2003, and she doesn’t think modern advertisers have cured banner blindness. If anything, she thinks it’s gotten worse.

Below is our condensed and edited conversation about why that might be, how banner ads can still be useful, and why she ultimately thinks they’re doomed to decline in value.

Are you running any banner ad campaigns right now?

I actually don’t currently buy any banner ads for my clients. I certainly have in the past at previous agencies, and with certain clients at my current agency, but right now there’s just not a need for them. Banner ads are for clients that want really cheap or efficient media, and want to get in front of as many eyeballs as possible. That’s not really what I’m doing at the moment. Our main objectives right now are awareness and branding, and, typically, banner ads don’t do either one very well. People don’t notice them as much as we would hope they would.

Over the course of your career, do you think people have started ignoring banner ads more? Less?

Well, there’s been a shift in how consumers are getting their media now, compared to 15 or 20 years ago. Most of us consume on-demand media, that’s curated to their preferences, through streaming services and podcast apps. There’s less browsing, checking out different things online, which means people see fewer banner ads.

Do you think ad blockers have played a role in making banner ads less important?

They really have not impacted the way I plan or buy media. Other buyers might have different experiences, but they’ve never created an issue for our clients.

Do you think there are contributing factors in banner blindness that people don’t talk about enough?

Banner ads on mobile devices. That, to me, is the worst thing that was ever invented, just because we all accidentally click those banners every single day, which inflates clicks and accidental website traffic, and creates really high drop-off rates for brands.

We often exclude them from our campaigns if we are buying banner ads, just because, from what we’ve seen, they’re just not effective at all. And they actually skew the data pretty significantly.

Read More About Measuring Ad ImpactWhat Is Click Fraud? How Can You Prevent It?

Over the course of your career, has there been improvement or innovation in how people measure banner ads’ impact?

I’m not sure that that measurement has evolved, necessarily. I think banner ads get a lot of attribution when you’re serving media through an ad serving platform — maybe more than they should, and, to my knowledge, there’s not a perfect solve for that. Sometimes they get last-touch attribution — so, a banner ad gets credited for a sale because it was the last ad that person saw before buying — even if that person wasn’t even aware that they saw the banner.

So they appear to be really efficient, and seem to drive a better ROI than a video ad or something that’s a little bit more expensive. But I wouldn’t say that if you put a “buy now” or “click here” call to action on a banner ad that you’re necessarily going to get the response that you’re looking for.

How are banner ads targeted — and do you think certain targeting parameters can improve ROI?

Banner ads are usually targeted on the back end, through some type of programmatic buy. Typically, you’re buying the audience, not the site. That’s really where the efficiency comes into play — you can reach a high-value audience on a less-than-premium site.

However, you can buy banner ads through a PMP, which is a private marketplace, where not only can you layer on targeting, but you can also hand-select the sites that are better and more contextually relevant to your product.

I do think that, if banner ads are placed in a contextual environment, they might resonate more with someone seeing them. So if I’m running a banner ad for something that’s health-focused, I might pay a little bit more for the banner ads placed on health-related websites or in health-related content.

Do you think a banner ad’s placement on a page plays a role in how effective it is?

If I were buying banners today, I would make sure that whatever I bought was above the fold, and was one of those premium, larger units. I think a 300 by 250, or a 300 by 600 banner has more potential than a smaller logo placement, or one of those smaller strips at the top of the header. There’s just more room to include brand messaging and copy.

Do you think banner ads have evolved over the years — for better or for worse?

I actually don’t think they’ve evolved. I think they’ve remained pretty consistent. Rich media features, like video and audio, were kind of a phase that came and went.

In a way, they haven’t kept up. There are a lot of new, really creative things in the digital space that provide opportunity to deliver your brand message in a meaningful way. Banner ads don’t do that. They certainly can serve a purpose, depending on what your KPIs are, but when you start thinking about digital video and streaming audio and connected TV and smart speakers and all these new devices and platform purchases — they’re a lot more compelling opportunities from a creative standpoint.

I wouldn’t be surprised if we start to see display spend decline pretty significantly and other areas increase.