What Is the Fourier Transform?

An idea you’ll find all over science, math and engineering is the Fourier transform (FT). The FT decomposes a function into simple sines and cosines (i.e. waves). In theory, any function can be represented in this way — that is, as a sum of (possibly infinite) sine and cosine functions of different amplitudes and frequencies.

I’ve provided a toy example below. Here, I’ve translated the top signal from the time domain to the frequency domain. In other words, we change the x-axis from time to frequency. The way to interpret peaks in the bottom plot is that the original signal represents the sum of two simple sine waves with frequencies one and two Hz, respectively.

You can find the code at the accompanying GitHub repo.

What Is Wavelet Transform?

A major disadvantage of the Fourier transform is it captures global frequency information, meaning frequencies that persist over an entire signal. This kind of signal decomposition may not serve all applications well, for example electrocardiography (ECG), where signals have short intervals of characteristic oscillation. An alternative approach is the wavelet transform, which decomposes a function into a set of wavelets.

More From Built In ExpertsStatistical Tests: When to Use T-Test, Chi-Square and More

A wavelet is a wave-like oscillation localized in time; I’ve provided an example below. Wavelets have two basic properties: scale and location. Scale (or dilation) defines how stretched or squished a wavelet is. This property relates to frequency as defined for waves. Location defines where the wavelet is positioned in time (or space).

Data Science Deep DivesAnscombe’s Quartet: What Is It and Why Do We Care?

How Does Wavelet Transform Work?

The basic idea is to compute how much of a wavelet is in a signal for a particular scale and location. For those familiar with convolutions, that’s exactly what this is. A signal is convolved with a set of wavelets at a variety of scales.

In other words, we pick a wavelet of a particular scale (like the blue wavelet below). Then, we slide this wavelet across the entire signal (i.e. vary its location), where at each time step we multiply the wavelet and signal. The product of this multiplication gives us a coefficient for that wavelet scale at that particular time step. We then increase the wavelet scale (e.g. the red and green wavelets) and repeat the process.

A couple of key advantages of the wavelet transform are:

We have touched on the first key advantage a couple times already but that’s because it’s the biggest reason to use the wavelet transform. This may be preferable to using something like a short-time Fourier transform which requires chopping up a signal into segments and performing a Fourier transform over each segment.

The second key advantage sounds more like a technical detail. Ultimately, the takeaway here is: If you know what characteristic shape you’re trying to extract from your signal, there are a wide variety of wavelets to choose from to best match that shape. I’ve provided a handful of options in the figure below. 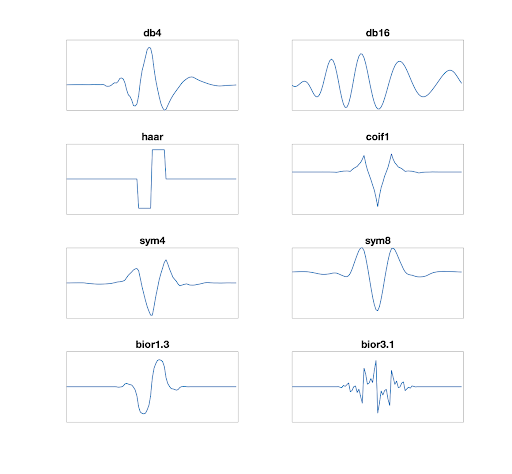 In this example, I use a type of discrete wavelet transform to help detect R-peaks from an electrocardiogram (ECG), which measures heart activity. R-peaks are typically the highest peak in an ECG signal. They are part of the QRS-complex, which is a characteristic oscillation that corresponds to the contraction of the ventricles and expansion of the atria. Detecting R-peaks is helpful in computing heart rate and heart rate variability (HRV).

You can find example code at the GitHub repo.

In the real world, we rarely have ECG signals that look as clean as the above graphic. As seen in this example, ECG data is typically noisy. For R-peak detection, simple peak finding algorithms will fail to generalize when applied to raw data. The wavelet transform can help convert the signal into a form that makes it much easier for our peak finder function.

Here I use the maximal overlap discrete wavelet transform (MODWT) to extract R-peaks from the ECG waveform. I’m using the symlet wavelet with four vanishing moments (sym4) at seven different scales. Below, I’ve plotted the original ECG signal along with wavelet coefficients for each scale over time. 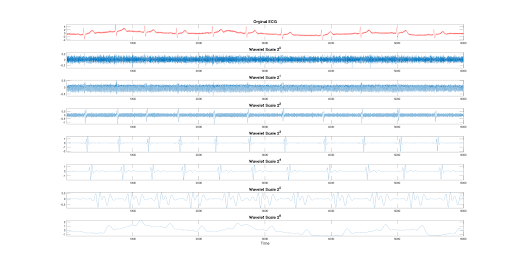 The smaller scales (such as 2⁰ and 2¹) correspond to high frequencies, and thus predominantly consist of noise in this example. As we go up in scale, we see blips emerge from the noise that correspond to R-peaks (i.e. in 2², 2³ and 2⁴). We then lose the signal in the larger scale coefficients (i.e. 2⁵ and 2⁶), which are associated with low frequency information. 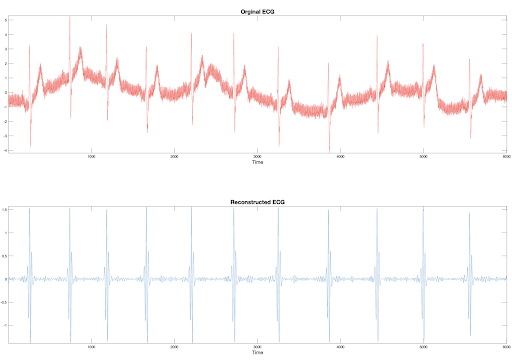 The final step is to apply a find peaks function to the reconstructed signal. This will give approximate timestamps of each R-peak. To evaluate the performance we plot the detected R-peaks on top of the original signal. 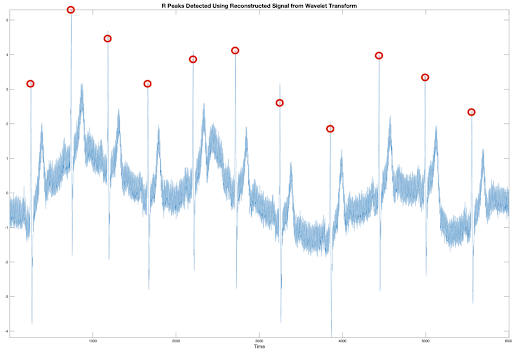