A Tale of 2 Metaverses

One of our partners, a digital marketing executive at a leading beauty brand, recently admitted she had “MetaFOMO about the metaverse.” It was the best thing a client partner has ever said to me. More importantly, she so accurately pinpointed a sentiment I expect many are feeling about the deluge of headlines, tweets and talks full of trendy, futuristic buzzwords.

In this piece, we’ll provide a measured view of the path to the metaverse; specifically how Web 2.0 giants — the Twitters and Instagrams of the world — will play a role alongside the Web3 upstarts — the Sandboxes and OpenSeas. We’ll also discuss the digital norms of today’s internet that likely will (and won’t) be disrupted as blockchain technology matures.

It’s important to point out that the metaverse is still being built, and it’s really just a continuation of the internet we know and use today. The metaverse is not some shadowy VR-based digital world that’s going to appear out of nowhere and consume our lives. This evolution will be gradual and will take place over the next decade, and if done right, will create a more equitable internet we all want to participate in rather than a doubling-down on worrying digital trends around user data and privacy concerns, but there are many competing forces.

The metaverse is not some shadowy VR-based digital world that’s going to appear out of nowhere and consume our lives.

The platform business models and closed ecosystems of Web 2.0 do have a lot to lose through disruptive new technologies built on decentralized principles. And so, the tale of two metaverses begins…

Without needing to build a strict definition, we say Web 2.0 and essentially mean large tech companies built on ad-supported business models. In this model, companies make much of their revenue selling advertising space and serving their massive user bases targeted ads. Meanwhile, new-ish companies are building blockchain-enabled products and services from the jump. In most cases, these organizations are still companies with centralized authority, management teams and investors, but they’re building blockchain products with the core tenets of Web3 — decentralization, community ownership, self-sovereignty — as their primary north stars.

A Tale of 2 Metaverses

We’ve been kicking around a tough question over the last several months:

In the next half-decade, what will happen first? Either…

To us, the so-called right answer to this question is much less important than its framing. Both of these scenarios will occur as innovation in the digital world continues to accelerate on all fronts. Web 2.0 tech giants have massive user bases with a significant head start in customer experience, multi-product ecosystems, internal resources and technical sophistication. Web3 upstarts have raised incredible amounts of funding and are building new, token-based business models that facilitate real digital ownership, composability and cross-platform digital identity; they certainly carry the potential for an exponential growth flywheel.

This tale of two metaverses will be told over the medium-term. The narrative will increasingly involve both Web 2.0 titans and disruptive Web3 innovators.

Without needing to build a strict definition, we say Web 2.0 and essentially mean large tech companies built on ad-supported business models. In this model, companies make much of their revenue selling advertising space and serving their massive user bases targeted ads. This has proven to be an extraordinarily profitable business model over the last two decades (creating the most valuable companies in human history), but it has also continued to attract controversy. We’ve all seen and heard the growing chorus of negative press for Web 2.0 behemoths in soundbites like “the user is the product,” “algorithms are biased,” “doom scrolling,” “subscription fatigue” or “walled gardens with too much control.”

As these organizations look to continue innovating for good and adding value to their ecosystem of users, we are beginning to see them test exciting, blockchain-related pilots that have truly disruptive potential. Here are a few notable examples:

More From Chris LiquinVaynerNFT’s Head of Strategy: An Executive’s Guide to NFTs

Meanwhile, new-ish companies are building blockchain-enabled products and services from the jump. In most cases, these organizations are still companies with centralized authority, management teams and investors, but they’re building blockchain products with the core tenets of Web3 — decentralization, community ownership, self-sovereignty — as their primary north stars. These businesses don’t have the polish and professionalism of Web 2.0 giants, and they certainly haven’t yet built the seamless consumer experience most mainstreamers expect. That said, they are experimenting with new, token-based incentive models that better align creators and fans, artists and patrons, and builders and users. They’re also massively funded, often by big-bet VC firms.

As innovative new business models emerge from the current landscape of rapid experimentation, we expect the early signs of exponential growth to continue. Here are several emerging Web3 platforms with room to run: 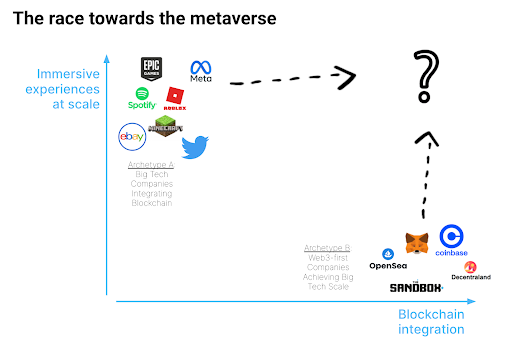 Will Web3 Ever Be Mainstream?Good Design Will Be the Key to Web3 Adoption

Web3 Has Catching Up to Do

Web3 startups have received enormous amounts of funding to build a better internet. Big tech giants have lofty valuations of their own, but they also have multiple years of consumer engagement, community-building and polished UI/UX design. One specific metric we looked at was recent valuations of major or potential metaverse players relative to their monthly active users (MAUs).

This will be a measured evolution, not a big-bang revolution.

It’s no surprise to see Web3-enabled platforms stacked on one side of the chart, but the difference in the average MAU multiple is staggering. The average valuation per MAU across three Web3 companies (Sandbox, OpenSea and Decentraland) is over $50 thousand per user while these six Web 2.0 companies, measured on the same metric, average only $200. That’s a 280x difference.

Clearly the market is placing a premium on Web3 platforms, but equally clear is the fact that Web3 has a lot of catching up to do in user adoption. Across the three Web3 platforms below, the average MAU is 263,000 users per platform. Across the six Web 2.0 platforms, the average MAU is 492 million users. That’s a 1,871x difference. Of course, valuations in both Web 2.0 and Web3 are not purely considered through the lens of user base — this is just a reference metric that sheds light on the different valuation and user profile of each archetype in our tale of two. We are still early in Web3 user adoption.

Web3 promises a new frontier of the internet, where consumers own the products they use and value accrues to users and builders, not strictly centralized platforms. This will be a measured evolution, not a big-bang revolution. There are a lot of established norms that won’t go away overnight, and in fact, they are necessary features of a safe digital experience for consumers. There are also firmly established norms Web3 will be able to change for the better. What happens next is likely a steady blend of continued progress, which will look a lot like Web2.5 in the medium-term.

Digital Norms That Will Likely Sustain 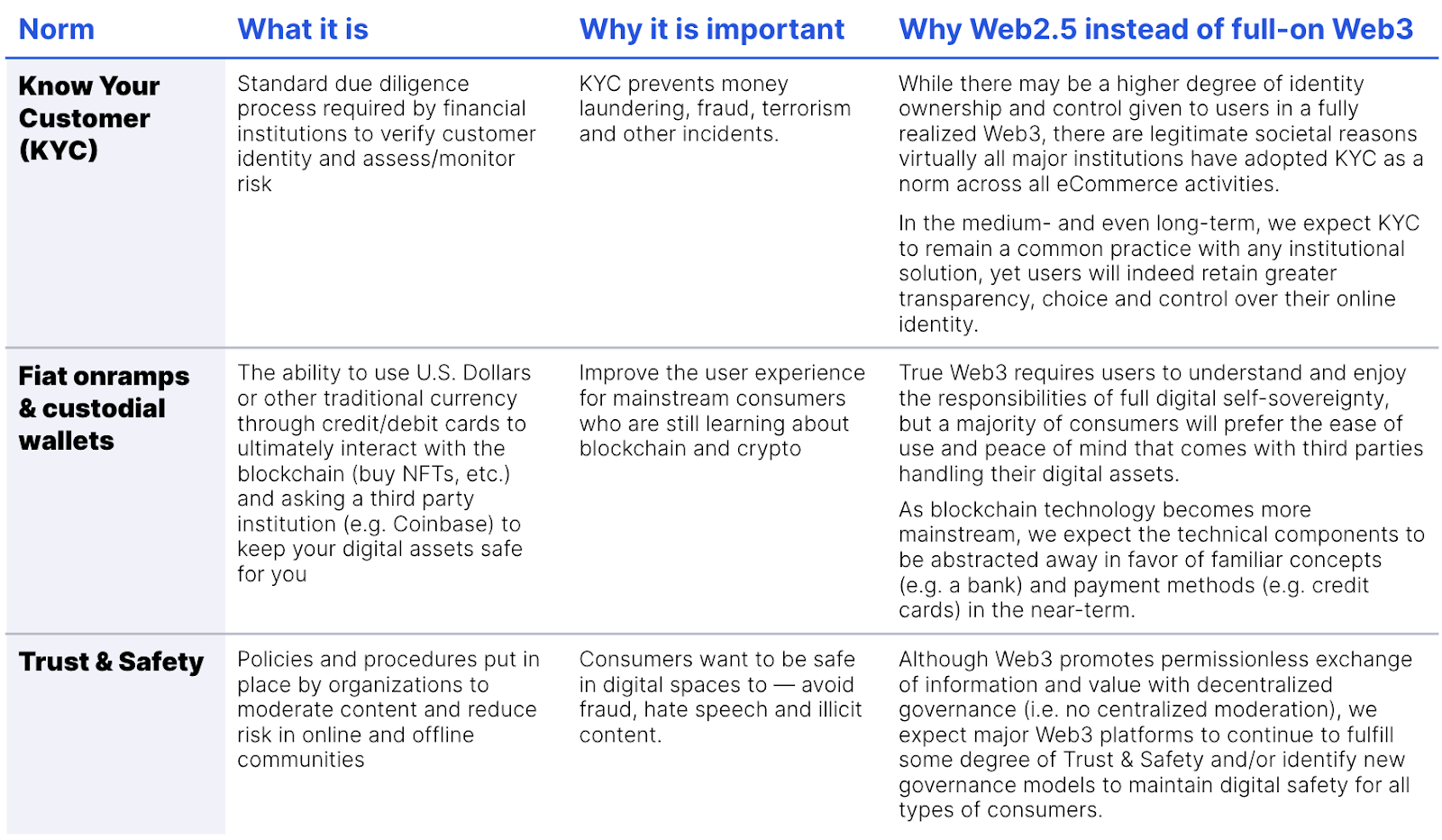 Digital Norms on Their Way Out as Web3 Matures 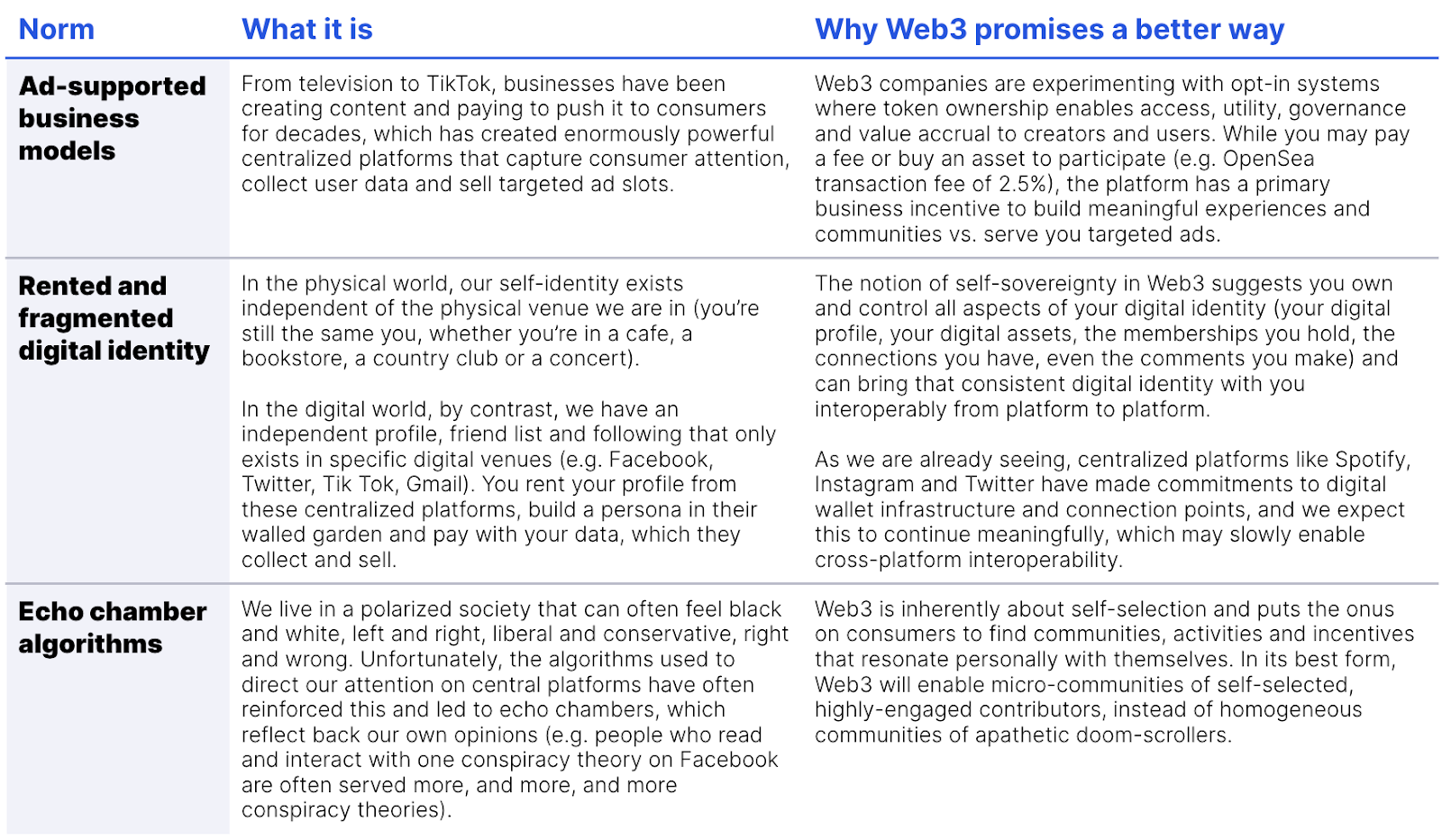 But I Want My NFTs NowWhere to Buy NFTs in 2022: 20 Marketplaces and What They Sell

What Does This Mean for Brands and Enterprises?

How can we get past our MetaFOMO and smartly participate in the Web2.5 metaverse today?

The genie is out of the bottle as far as blockchain technology goes, and it will continue to play a growing role as Web 2.0 and Web3 companies race towards the future metaverse. Whether your existing Instagram partnership needs to be renegotiated to include provisions for NFT-related integration or you need to strike new deals with emerging platforms like Sandbox, your organization needs to consider building a digital future with thoughtful, forward-looking partnerships as a key priority.

How can we get past our MetaFOMO and smartly participate in the Web2.5 metaverse today?

That said, organizations need to be realistic and thoughtful about their digital ambitions. A partnership with a platform like Sandbox may not bring you immediate ROI in the form of traditional marketing metrics, but it may help you plant your flag in the emerging cryptoeconomy and build cultural relevance. Conversely, an activation in Fortnite may not bring your brand new credibility in Web3, but it may more clearly satisfy your mainstream reach and engagement targets. Being thoughtful about your strategic goals and defining your metaverse ambition are the first steps towards finding your organization’s role in this tale of two metaverses and winning in the medium-term reality of Web2.5.

The views expressed in this opinion piece are solely the perspectives of the authors and not necessarily representative of those of their employer.