Women still remain underrepresented in STEM fields, making it that much harder for others to envision themselves in those roles. But it doesn’t have to be this way. 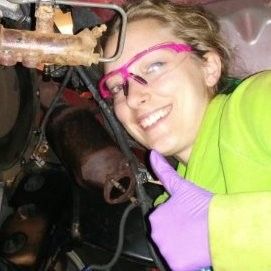 I had no idea that tinkering in hobby robotics would be my first step toward a career in the industry.

Robotics is by far one of the most exciting fields: one that demands hands-on technical skills. For those who might be concerned that they don’t have a formal higher education focused on robotics or engineering, your skills and determination are still relevant for the future of the industry.

Since 1990, the science, technology, engineering, and math (STEM) workforce has grown 79 percent, with the field slated to increase another 13 percent by 2027. Despite such astronomical growth, women remain a minority in the field. A report by the National Girls Collaborative Project found that women account for a modest 28 percent of the workforce in science and engineering roles. In robotics specifically, that number is even smaller: just 19 percent of robotics engineers are female.

A Hobbyist’s Path to a Career

As a young woman fresh out of high school, it was hard for me to imagine I’d be able to immediately go to work for one of the world’s leading robotics companies and still be there more than 13 years later. But as an avid robotics hobbyist — I was a member of my technical high school’s robotics club — and with a bit of encouragement from my advisors, I took the leap of faith and applied to a position with Boston Dynamics.

For more than three decades, Boston Dynamics’ ambition has been to build the world’s most capable robots. Our robots are designed to go where traditional robots cannot, and they perform work in support of people. The company motto — build it, break it, fix it — is reflected daily in our approach to tackling some of robotics’ most challenging tasks. Our four-legged robot, Spot, is working in hazardous environments such as construction sites, nuclear power plants, manufacturing facilities and offshore oil rigs, helping to keep workers safe.

Thinking back to high school again, that one decision to reach for something that I originally thought was out of my league set me on course for a career greater than I could have ever dreamed. Had I not been willing to take what I thought was a risky chance, I would simply not be where I am today.

Read More From Women in TechHow to Debug the Gender Gap

The more I progress in my professional career, the more I’ve come to realize that I am not alone in this thought process. At times, women underestimate themselves and can be more risk averse than men, which often deters highly capable and qualified candidates from applying for or asking for the job they really want. This is compounded by the fact that women still remain underrepresented in STEM-related fields, making it that much harder for others to envision themselves in those roles.

In my case, my role at Boston Dynamics was my first “real” job. I was brand new to the professional world and had limited interview experience, which made the application process that much more intimidating. I was thrilled when I was offered an interview, but I didn’t leave thinking I got the job. The interview consisted of touring the lab, interacting with the robots and discussing tools and programs that the company used. I brought with me a hand-fabricated robot I had built that wasn’t functional, and I asked a lot of questions about tools that I was unfamiliar with. I was convinced that this lack of knowledge would cost me the job.

But in fact, it was my curious nature and proactive approach that made me an attractive candidate to the company. I remember saying “I don’t know” often in that interview. In hindsight, the aspects I believed to be negatives were valuable assets that the company saw and continues to hire for. These are skills that aren’t displayed on a résumé, and they can often be underestimated during the job-seeking process: communication skills, a proactive nature, a passionate curiosity and honesty about what you know — and what you don’t.

Since landing the job, I’ve worked on a number of the company’s robots including Spot, Big Dog, LittleDog, Atlas and more. From a technical perspective, my favorite project I’ve worked on is PETMAN, because it was so before its time (almost 10 years ago). Our first attempt at a humanoid, it maintained human body temperature and could sweat like a human. However, I’ve definitely had the most fun and fulfillment working on the prototype version of the Spot Arm a few years ago; my team is amazing and there’s nothing like creating something new from scratch.

If I could impart some wisdom to my younger self — or young women like me — it would be to not undervalue the skills and the pure grit you have to offer. A long, impressive résumé is important in some cases, but often skills such as critical thinking, communication and delegation outweigh what’s on paper.

My route to my current position as a senior robotics technician was perhaps unconventional, but certainly not unique. It’s the age-old tale of identifying your passions and going for it. It’s not always as neat and tidy as the phrase, but there is no reward without risk. And in my experience, the reward of landing your dream job far outweighs the risk of taking the chance. What’s the worst thing that could happen?