With over 700 programming languages in existence, deciding which ones to master can be overwhelming. Start with the foundations like Python and C++, or explore new languages like Rust and Crystal?

According to CirrusMD CTO Gabe Varela, “Old school is the new school.”

His team at CirrusMD still utilizes Python and Ruby on Rails for data engineering tasks, and although those tried-and-true languages aren’t going anywhere, new programming languages do bring some improvements. Rust, a programming language that launched in May 2016, is praised for its ability to write “safe” code — meaning objects are managed by the programming language from the beginning to end, rather than developers doing pointer arithmetic or managing memory like they do in C or C++ programs.

Ultimately, to be a successful engineer, prospective programmers don’t have to know every language. While the following engineering leaders can all agree they look for good developers first, each professional we spoke with had a preference when it comes to what the best programming language is to learn. From Python to Rust to C# and JavaScript, here are the tools they’re using — and what they look for in resumes.

CTO Mike Gionfriddo watches rising programming languages but still believes that Python and C# are essential languages for programmers to learn due to their versatility. During interviews at Pie Insurance, he lets engineers select the language used during coding tests.

"Programming languages are tools and all good developers can learn them.”

I love the growth in programming languages over the past five to 10 years, and the rise in functional programming languages like Scala has been interesting to watch. Though not a new language, Python is a great language for all developers to be well-versed in. It allows you to create a wide variety of applications and is very popular in the data science community.

We are mostly a C# shop, but we don’t make it a requirement. Programming languages are tools and all good developers can learn them. We look for good software engineers first. In the coding test during the interview, we let the candidate select the language.

What’s a programming language you’re not currently working with that you’d like to?

We are doing some prototyping work using Go, and I think it’s a great match for solutions being built using a serverless architecture. I’m really interested in exploring Kotlin. It does a better job of combining functional and object-oriented features than other languages, and the fact that it’s interoperable with Java allows a large number of developers to be productive without much effort.

Operating a virtual healthcare platform like CirrusMD means there’s a lot of sensitive data on the back end. For CTO Gabe Varela, Python and Ruby on Rails are the “old school” programs that are still in demand for new engineering projects.

"In recent recruiting cycles, we’ve seen a lot of applicants with Golang experience.’’

Old school is the new school. As someone who’s been using Python since the early 2000s, I love how it’s made a huge comeback due to the high demand in data science skill sets. We leverage Python for a lot of data engineering tasks at CirrusMD, and it’s certainly a tool we’re actively looking for on resumes.

Expanding on the theme of ‘older’ languages continuing to be in-demand: we’re a company that still has a lot of Ruby on Rails in our platform and it continues to be the core stack we look for experience in when hiring.

What’s a programming language you’re not currently working with that you’d like to?

In recent recruiting cycles, we’ve seen a lot of applicants with Golang experience since a lot of companies use it when they begin to break down their monoliths into services.

As an engineering team, we’re working to get more of our team to have experience with Golang since it’s such a great tool for building performant small services and it’s easy to deploy and manage. Our team has built several services in Golang and Elixir/Phoenix recently. As we look forward to 2020, we hope to expand more using those languages.

When working for a fintech company like Reserve Trust, safety is essential. That’s why Head of Engineering Ido Samuelson uses the programming language Rust to deliver on projects.

"We prefer candidates with a wide array of tools in their knowledge base to get stuff done.’’

I don’t look for specific languages on resumes. Instead, I look for a variety of styles rather than particular programming language experience. I believe people work best when they’re not in their comfort zone and prefer to choose candidates based on what drives their curiosity.

Having a background in Rust is a huge plus since two of our company values encompass collaboration and curiosity. The community surrounding Rust empowers developers to make secure applications quickly.  Rust enables us to deliver on our values of trust and drive by placing a guarantee in the way we handle events. Its syntax allows those with the drive to get started quickly.

We wanted to separate ourselves and create standards for embedded business payments. Rust allows us to achieve this with minimal friction and the highest security.

What do you look for in engineering candidates?

We prefer candidates with a wide array of tools in their knowledge base to get stuff done. We encourage everyone to bring their flavor to the table, and we’ll collaborate with you to get to a finished product that genuinely resonates with what we’re creating.

The Rust community reminds me of the drive and curiosity I had when I was 15 years old and getting into C++. It’s exciting for me to be involved with such a large and growing community.

NVISIA supports companies with software development and legacy modernization services. It also offers IT strategy, as well as staffing and skills assistance to scale clients’ agile teams. Solutions have been provided to the likes of Verizon, Discover, Harley Davidson, American Family Insurance and We Energies.

With the level of diversity in not only the services that NVISIA provides, but also the industries it services, team members at the company need to stay abreast of the latest programming languages: after all, a varied client base requires a large tool belt.

Internally, NVISIA uses languages like Golang, .NET and Scala to provide clients with the solutions they need. But it may surprise some that the company’s engineering leaders don’t seek out candidates with expertise in specific languages when hiring.

“We don’t judge intellect based on a person’s native language, so the same should be applied to judging resumes,” said Software Engineer Mustafa Abdul-Kader.

Abdul-Kader said limiting the company’s hiring search to individuals with specific language experience is an exclusionary and ineffective practice. But if he could focus more on one programming language, he'd choose Julia. Here’s why:

Julia can be used to write any application, but its design is suited best for high-level numerical analysis and computational science. The language first appeared in 2012 and three years later, the Federal Reserve Bank of New York used it to create models of the U.S. economy. Its estimations were made 10 times as fast as its previous MATLAB calculations. 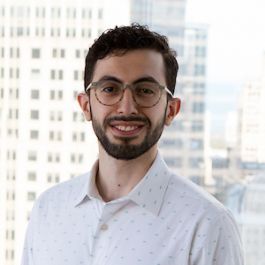 Do you look for specific languages on resumes, and if so, why?

A lot of the companies in the Chicago area have a strong preference for Java. But the hot languages also include Python, JavaScript and C#. The reason for this is related to the industries in the area and the rise of machine learning-inspired solutions. With that being said, I find that looking for specific languages on a resume is a useless metric. We don’t judge intellect based on a person’s native language, so the same should be applied to judging resumes.

"I find that looking for specific languages on a resume is a useless metric.”

What’s a programming language you’re not currently working with that you’d like to, and why?

I’d like to work with Julia. It is a high-performant, general-purpose programming language with a focus on numerical analysis. In the professional world, it is a bit too young to have picked up much traction, although it is very popular in academia.

I’d like to see more support via library bindings to help drive adoption. This is because the language implements some cool concepts to achieve high performance in a very Python-esque writing style. There’s a demand to squeeze more performance out of software. So having a language that allows you to write in an intuitive and simple manner — while remaining performant — can open the doors to more efficient and increased throughput of data processing and analysis techniques.