Should You Use Fear-Based Marketing to Sell Your Product?

“Without our solution, you’re toast” is a controversial — but effective — marketing message.
Written byMae Rice
Mae Rice
Staff Reporter at Built In
Mae Rice is a former Built In staff reporter covering marketing and emerging tech trends. Formerly editor in chief at MarketerHire, she is currently a writer for the media startup Workweek.

The coronavirus pandemic is scary, but basic precautions make it less so — like wearing a face mask when you’re around people outside your household.

Many Americans have resisted this, though, by going “nose commando,” and by fully refusing because “it’s [their] right as an American.” It’s a major public-health problem.

Is the underlying issue that people are scared ... but not scared enough?

First, they build a survey to measure the campaign’s core concern — in this case, a person’s likelihood of wearing a mask in public. Then they pull together a representative sample of the message’s target audience, and give them the survey before and after a randomized, controlled trial of a handful of messages. 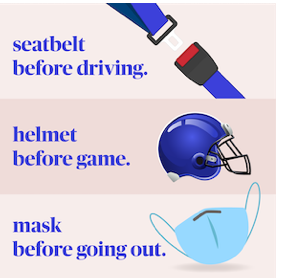 Some people who participated in the mask-wearing experiment saw no message — they were the control groups — and others saw scary messages. The scary messages warned that, if you didn’t wear a mask, you could infect elderly, vulnerable family members; the country could see a second wave of coronavirus cases (and strict lockdowns).

These are alarming possibilities — but citing them didn’t make people more likely to wear masks, Civis found. Overall, they had no measurable effect.

The only type of message that significantly boosted people’s self-assessed likelihood of wearing a mask was a practical one, that compared a mask to a helmet or a seatbelt (above left). So, does that mean fear-based marketing messages don’t work? Not at all. It just means they’re “kind of a crapshoot,” as Miller put it. “Usually what you think is going to move the needle doesn’t move the needle.”

Halitosis and the History of Fear-Based Marketing

Fear-based marketing campaigns definitely work, though, and here’s proof: “Halitosis” is in the Oxford English Dictionary, listed under “Medicine.”

Originally, though, it wasn’t a medical term; it was a marketing one.

Back in the 1920s, Listerine invented this term for bad breath in the hopes of selling even more of its eponymous product. At that point, Listerine had been on the market for decades — first as a surgical antiseptic, then as a way to kill germs in the mouth — and it was selling fine. It sold much better, though, once it was framed as a cure for a medical-sounding condition.

“Halitosis was fake news before there was fake news,” Paul Earle, principal of the innovation and design consultancy Earle & Company and faculty member at Northwestern University’s Kellogg School of Management, told Built In. It cast a “sinister, clinical, fake medical” aura around the awkward, but cosmetic, problem of bad breath, he said.

Earle isn’t a fan of fear-based marketing messages like this. He doesn’t mind marketers positioning a product as a solution to a well-known problem — that’s a classic tactic — but “exploiting fear,” especially when there’s an element of fiction, strikes him as “truly unethical.”

But even he acknowledges that fear-based messaging — or messages that stir up “fear, uncertainty and doubt,” a trio marketers often shorten to “FUD” — can move a lot of product, and not just for Listerine.

“You can scare the heck out of people all the way to the cash register,” he said.

Fear is one of the three key emotions that drive people to action, marketing guru Seth Godin wrote on his blog. The other two, hope and love, are harder to cultivate, so fear is “the easiest way to build a brand.”

For a long time, the easiest way prevailed in the United States. Even into the 1990s, Earle said, fear-based marketing messages were ubiquitous.

“Marketers ... would do really unethical — brilliant, but unethical — things to invoke terror,” he said. “That feeling of being not good enough, or not pretty enough or not thin enough, creating all of these straw man conditions in an attempt to get someone to buy a product.”

Special K cereal, for instance, rose to prominence “on a simple message: you’re fat,” Earle said. Today, ads like this are widely known to cause body image issues, especially for women; Earle called it “irresponsible.”

In the aughts, though, brand messaging started to shift. A pivotal moment: Dove’s “Real Beauty” campaign, which debuted in 2004. It was one of the first ad campaigns to align with the body positivity movement, and it made a major splash; within a month of its launch, Dove’s firming cream sales had doubled.

Even Special K took note, Earle noted — it changed its messaging, too, albeit a decade after Dove, to focus less on counting calories and losing weight, more on nutrients and empowerment.

It was a hit with consumers.

The key for commercial brands today, Earle said, is standing for something people want to run toward — not away from. The million-dollar question for marketers, he said, is: “How can you create real community and mission around brands?”

It’s no longer, “How can we scare people?”

Not Gone, Not the Default

Of course, fear-based messaging hasn’t disappeared, especially when it comes to potential fixes for real, alarming problems like the coronavirus.

Civis Analytics found that, when it came to the coronavirus vaccine, people’s self-reported likelihood of getting one increased when they were exposed to a fear-based message.

Unlike Listerine’s scary messaging about halitosis, though, this message was true — it was the personal story of a young, otherwise healthy American who got COVID-19 and died.

When Should You Use Fear-Based Messaging?

Ultimately, there are a lot of different factors in what persuades people to take action, Civis’ Miller noted, and they’re hard to discuss.

“Folks are pretty good at identifying ... ‘Oh, I like A better [than B],’” she said. “Folks are not really good at sensing, identifying or describing” what they find persuasive.

(Hence Civis’ methodology, which doesn’t ask them to. It simply asks them to rate how likely they are to do something before and after seeing a message.)

Analysts also struggle to predict what will persuade, even with terabytes of data, because results depend so much on context: who the viewer is and their existing beliefs, knowledge and experiences; their cultural moment; not to mention the context in which they actually see the message.

It’s hard to make any foolproof generalizations about when fear-based messaging works best. You have to test everything, Miller said.

Still, Earle sees an overarching cultural trend toward warmer messaging. He can think of countless examples of companies “trying to ...  get away from fear and loathing,” he said, “to something that’s positive, and friendlier and happier and more aspirational.”

Even when it comes to oral care — which prevents real problems ranging from awkward (bad breath, or “halitosis”) to downright frightening (root canals) — the winds have changed. A brand called Hello, Earle noted, markets its toothpaste, toothbrushes and floss in an unusually positive way.

“The orthodoxy in oral care ... is all about fighting cavities and destroying plaque and annihilating bad breath and eliminating gingivitis, and all these boring, hostile terms,” he said. But Hello focused on “a healthy mouth and a friendly smile” instead.

The company’s annual sales had neared an estimated $40 million when, this past January, Colgate acquired Hello for an undisclosed sum. In their case at least, positivity literally paid off.