3D printers are opening up more engaging avenues for learning in the classroom.
Written byMae Rice
Mae Rice
Staff Reporter at Built In
Mae Rice is a former Built In staff reporter covering marketing and emerging tech trends. Formerly editor in chief at MarketerHire, she is currently a writer for the media startup Workweek.

Once upon a time, the ocean teemed with enormous sharks far bigger than the dinky one in Jaws — ten times the size of a T-Rex, by one estimate.

Scientists call these long-extinct creatures “megalodons,” a name that rightly translates to “big tooth.” Of all the megalodon’s impressively enormous features, the mouth-area stands out. Its jaws applied enough pressure to crush a car. Its mouth opened wide enough to swallow a train.

Scientists know all of that primarily from the megalodon’s fossilized teeth, some of which are more than seven inches long. Once you start looking for them, they crop up frequently. They’ve been unearthed everywhere except Antarctica, and they’re for sale on eBay (not that we recommend purchasing them there).

You can also find them in various K-12 classrooms, menacingly bared in floor-to-ceiling jaws. 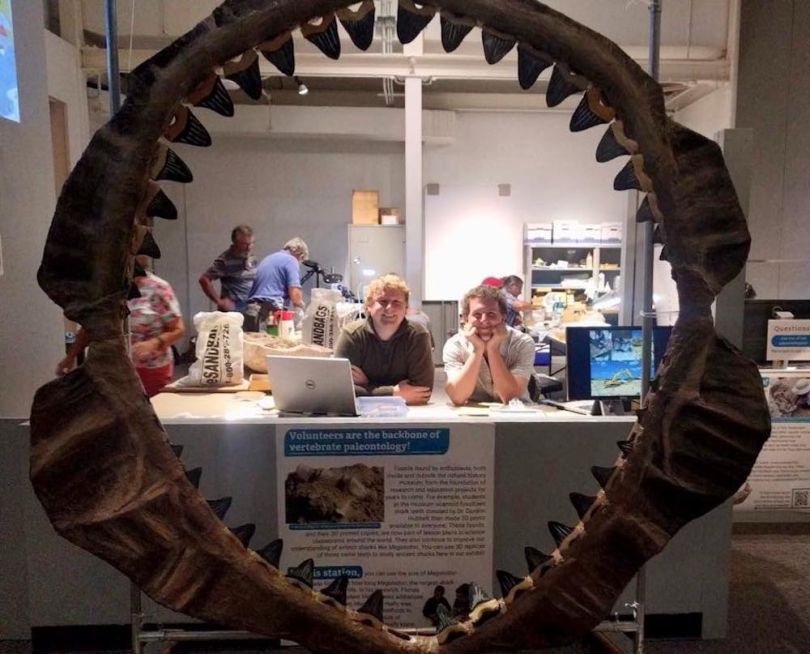 The school ones aren’t really fossils, though — they’re 3D-printed replicas, created under the auspices of iDigFossils. This National Science Foundation-funded initiative — a collaboration between the University of Florida and the Florida Museum of Natural History — aims to integrate 3D printing into American K-12 curricula.

As part of the program, scanners and 3D printers were purchased for classrooms in roughly 15 schools, teachers were trained to print fossil replicas to use in their lessons. The megalodon fossils are typically a hit, iDigFossils project manager Claudia Grant said, because the ancient shark is “such a charismatic animal.”

It also plays a key role in the iDigFossils project’s origin story.

Years ago, when Grant worked in the paleontology area of the Florida Museum of Natural History, she had a walk-and-talk meeting with her supervisor. (Walk-and-talks are not just for West Wing!) They strolled past an exhibit dedicated to Florida fossils, which had “this massive, spectacular Megalodon jaw” at its entrance.

“Wouldn’t it be fun to 3D scan these teeth and have students [print them out in class and] build the jaws?” Grant said offhandedly to her supervisor.

“He opened his eyes and looked at me, and he’s like, ‘That is totally possible,’” she recalled.

He was right, but it wasn’t easy. Megalodon teeth are a dime a dozen (well, not literally — they go for around $250 per tooth), but the museum’s teeth all came from the same megalodon. A full set like that is quite rare, Grant said. Since kids weren’t permitted to handle such valuable fossils, and taking 3D scans of them required a huge MRI machine-like scanner that the University of Florida didn’t have, Grant and her supervisor reached out to Duke University for a loaner. A team of museum researchers then applied for and received a grant from the NSF’s ITEST program. It was generous, too — more than a million dollars.

By 2016, iDigFossils was a funded reality.

The team used its funding to outfit schools with Next Engine 3D scanners and Lulzbot printers, which look a bit like sewing machines and can print virtually anything using non-toxic plastic. Grant said she and her colleagues selected those particular brands not only because they were affordable, but also because their high-resolution capabilities allow students to upload scans to  scientific databases used by professionals — “almost like citizen science.”

Mostly, though, students and teachers download and print fossil scans for class activities. Printed megalodon teeth are used in lessons about shark evolution. They also prove useful for hybrid science and math exercises in which students extrapolate the shark’s size from the size of its teeth alone. Students assemble entire megalodon jaws as well — just as Grant imagined.

"They tend to forget that they’re in the science class because they're so excited,” she said.

Teachers report spikes in student engagement when printed fossils are incorporated in the curriculum — and not just shark teeth. One teacher 3D-printed turkey skeletons from various eras for a Thanksgiving season lesson on turkey evolution. In another class, Grant said, they’re reconstructing the body of a giant extinct snake. To that end, she helped them 3D-print 250 vertebrae.

For yet another lesson, teachers can print massively magnified fossils of foraminifera, microscopic plankton from the ocean floor that contain historical information about the water. That makes them “really important fossils for learning about ocean, ocean circulation, temperatures and of course climate change,” Grant said.

Turning fossils into classroom props is just one of the ways 3D printing is impacting education. The technology is useful in all kinds of lessons that allow students to learn by seeing and making, instead of merely listening. That’s a huge boon to those with tactile and visual learning styles who struggle in lecture classes. Grant counts herself among that group.

“I really love this project because I come from an artistic background,” she said. “I am a visual learner.”

We’ve rounded up a handful of other enterprises that meld 3D printing with education.

What it does: On this free digital platform, educators help each other integrate new technology — especially 3D printers — into the classroom. That can mean offering each other tech support, or sharing teaching materials ranging from lesson plans to actual 3D scans. The site’s massive library of free digital resources can be sorted by class subject, target age range and resource type. In one of the site’s verticals, educators can also shop for 3D printing equipment.

What it does: This global manufacturer has supplemented its array of 3D printers with a digital STEAM curriculum. (That’s an acronym for Science, Technology, Engineering, Arts and Math.) The lesson plans involve demonstrations with 3D-printed models, as well as workshops on the art of 3D design and printing. It’s all easy to execute with the company’s novice-friendly design software and classroom-compatible printers, the da Vinci Junior series.

What it does: This organization aims to modernize American manufacturing with the latest 3D printing techniques. That’s a lofty goal, and one part of it is educating workers on how to use technology. In that spirit, America Makes hosts various trainings and workshops, including 3D Veterans — multi-week, bootcamp-style programs for military veterans. It also facilitates manufacturing apprenticeships and runs five-day courses, or ACADEMI, that blend lectures and hands-on labs about 3D-printing with metal.

What it does: This company makes the Replicator, a user-friendly 3D printer that’s chugging away in thousands of classrooms. Perhaps more important, Makerbot complements its gadget with free educator resources, like the teacher-authored Educators Guidebook for 3D Printing in the Classroom. (One suggested exercise: Printing miniature homes designed to withstand extreme weather simulations.)

Makerbot also hosts Thingiverse, a platform where creators share open-source 3D designs. So far, users have uploaded more than a million models. It’s not specifically educational, but it boasts a vertical for teachers that’s stocked with free lessons on topics ranging from geography to engineering — and its mission of making knowledge public has a distinctly academic flavor.

What it does: This company specializes in 3D printers that can make large objects from thermoplastics, nylon and other industrial materials. Bigrep printers likely won’t appear in K-12 classrooms, but the company’s academy hosts courses of its own in a converted Berlin factory. (Its experts also host trainings at clients’ offices.) The hands-on curriculum covers the basics of designing, printing and maintenance.

The Future of 3D-Printed Paleontology

iDigFossils won’t be around forever; the program got three years of funding in 2016, so it’s nearing an end.

To Grant, though, the future looks bright. iDigFossils has made a permanent contribution to science and math education, creating archives of resources that will continue to shape curricula in years to come.

“We have so many lessons and… so many 3D scanned bones,” she said. “Anybody can download those bones and use the lessons. Everything is open source and free.”

iDigFossils isn’t the only institution sharing scans, either. The organization’s website features a roundup of free 3D scan archives that Grant and her team have deemed trustworthy, from sources that include NASA and the Smithsonian.

And though it’s true that 3D printers aren’t cheap, prices have dropped considerably in recent years, from several thousand dollars to a couple hundred. It’s also worth noting that printing plastic, the 3D equivalent of ink, is relatively inexpensive — especially compared to the cost of 3D prints from third parties.

All of this means the iDigFossils project needn’t disappear when its funding does. In a screen-centric era, that’s especially important to Grant, who worries about the technological gap between school and extracurricular life.

“[Students’] entertainment comes from Minecraft, Fortnite, their phones,” she said. “Then you're going to put a book in front of them and tell them to memorize and do flashcards?”

There’s a higher-tech way. It just takes a printer, plastic and scans of terrifying ancient teeth.