The Pinterest and Grubhub alum currently leads growth at Eventbrite.

If you Google “Casey Winters,” the chief product officer at Eventbrite, the first result is his business blog, Casey Accidental. The second result is his LinkedIn. The top search-related images are all photos of him (except one of a woman with bangs). 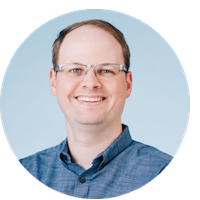 This is no accident.

Ever since he graduated from college in 2005, Winters (left) has worked in the growth space, and SEO is something of a specialty. He’s used it in various roles, and one of the first SEO projects he took on was “managing the SEO presence for my own name,” Winters told Built In. “When people search for my name, they should be able to not only find me but have a decent understanding of the types of things I think about.”

So Winters started his blog in 2010, back when he was leading growth at Grubhub. Today, a quick Google search surfaces what he’s thinking about — autonomy in the workplace, the problems with martech and Google’s shifting search algorithms, among other subjects.

You can even tell from his blog he’s a self-described “music geek.” Casey Accidental is a riff on K.C. Accidental, Broken Social Scene’s original name. (They’re not Winters’ favorite band, though — that would be electronic duo Boards of Canada.)

Winters was, in fact, a music blogger for five years before he was a business blogger — though those early blog posts are now buried under coverage of his vibrant growth career. We spoke to Winters about his varied roles in the growth space — which began before he ever heard of “growth” — and what unites them.

His first big growth success was at Grubhub.

“The job description was, ‘Double the growth rate of the business by the next month,’” Winters said.

It was ambitious — but by the time Winters left Grubhub, just over five years later, he had done much more. He had grown the company’s user base to three million, roughly 100 times what it was when he started. The company had IPO-ed, too, with a valuation of $2.7 billion.

It was while he was at Grubhub that Winters first learned the term “growth,” from a 2012 blog post by Uber growth leader Andrew Chen. Titled “Growth Hacker Is the New VP of Marketing,” it chronicled the way “growth hackers” were merging marketing and coding to expand startups’ profiles on miniscule budgets.

Though the term “growth hacker” has fallen out of favor — “growth is done in teams,” Winters said, “not by some lone hacker who comes in and saves the day” — the tactics Chen described dovetailed with what Winters had been doing at Grubhub, and sparked new ideas for what he could do there.

So what was Winters doing, exactly?

Grubhub was a “pure marketplace,” he said: a platform that connected restaurants with delivery customers. The business’ growth relied heavily on “liquidity” — a new user being able to find whatever food they’re dreaming of on Grubhub. Liquidity varied by city, and boosting it required developing and optimizing a playbook the company could rely on in city after city.

When Winters started at Pinterest in 2015, though, he confronted a totally different business model. A local playbook would be irrelevant there — the company didn’t deal in tangible physical products, like food. It was a pure digital network.

So at Pinterest, Winters focused more on amassing data on user behavior and user interests.

“Essentially, you come to Pinterest to connect to your interests,” Winters said of Pinterest’s customer experience. “So the more that we can understand about ... your particular interests, the better the product is going to do.”

He and his team made sure users found engaging pins through SEO, in part. What could be a more reliable way to connect someone with their interest than to show them pins about knitting when they just Googled “knitting”?

Pinterest had taken off in “tight, largely Midwestern friend networks where people shared a lot of the same interests,” Winters explained. When those same users started inviting their significant others and friends from the coasts to the platform, the site didn’t suck them in as much — those people tended to have interests that diverged from Pinterest’s core user base’s.

SEO offered a new path. By optimizing Pinterest boards for search engines, Winters and his team could attract new people to the site, then take them on a carefully optimized user activation journey. They were encouraged to download the Pinterest app, and create boards themselves. These new boards could then be distributed to search engines, and bring in more users.

“Really proud of our ability to build that sustainable loop of growth,” Winters said. While he was at Pinterest, the company’s traffic from Google roughly tripled.

What he and his team did at Pinterest was very different from what he and his team did at Grubhub though. There, he had focused more on attracting new restaurants and customers; at Pinterest, he focused more on fine-tuning the product and its onboarding experience. Grubhub was clearly a place to order food; to new Pinterest users, though, it wasn’t always immediately obvious what the site did.

“You kind of have to start experiencing to understand the value and role it can play in your life,” Winters said. So at Pinterest, his work was “more about getting people in it and teaching them how to use it.”

Winters spent two years at Pinterest. Then, in 2018, he started his role at Eventbrite.

Inside Growth at Eventbrite

When Winters started, Eventbrite relied heavily on organic growth. Hosts set up event pages on the site, and then promoted those pages to their friends and colleagues. They paid Eventbrite in money — they gave the company a small percentage of their ticket revenues — but they also all “paid” the company in word of mouth.

“Ninety-eight percent of creators who use the platform sign themselves up,” Winters said. Marketing spend for the platform was minimal.

This business model was new to Winters, but not as radically new as Pinterest had been. Eventbrite was a bit like Grubhub in that it was a digital answer to an analog question. In Grubhub’s case, the question was what to eat; in Eventbrite’s case, it was what to do for fun.

Eventbrite also had “some of that marketplace component that Grubhub has,” Winters noted. The platform connected people with events they’d enjoy.

Since 2015, Sierra Nevada Brewing has hosted nearly 500 events through Eventbrite.

This has product implications. While Grubhub’s clients rarely had their own promotional infrastructure, Eventbrite’s biggest hosts had serious platforms. Sierra Nevada, for instance, has more than 400,000 Facebook fans.

This meant Eventbrite didn’t just need to offer ticketing tools, but platform integrations, which let hosts share their event pages through channels like their email lists and their Facebook pages.

That’s just one of many features event creators seek.

“Every time you talk to a creator, you learn something new about the type of business they're working on, the types of needs they have,” Winters said of user research at Eventbrite.

As chief product officer, Winters can try new approaches to meeting those needs. At Eventbrite, he leads the product management, product design and user research teams — which means he and his teams can prioritize and roll out brand new features.

Recently, for instance, they unveiled new tools for music venues, including a way for them to include their specific floor plans in their event listings. Eventbrite has also rolled out identity-based permissioning. That means, for example, that an accountant and a marketer may have different access privileges when they log into the same enterprise-scale Eventbrite account.

Eventbrite still has plenty of growth left to do, though. Winters hopes to “drive more inflection” in the users-over-time chart, he said, through a mix of tactics: new partnerships, new distribution channels and one tactic he’s now spent more than a decade on: SEO.

So... Is Everything Growth?

For someone who’s spent his whole career working in the growth space, Winters has rarely done the same thing twice. Growing Grubhub, Pinterest and Eventbrite were wildly disparate projects. Taken together, they almost beg the question: What unites them? What is growth?

Winters argues that all growth projects aim to answer the same core question: How can we connect people to the value of our product? The ways companies answer that question, though, are diverse and always evolving.

One thing is clear — growth projects, in general, have shifted away from “hacky acquisition strategies,” Winters said.

They’ve simply been discredited, by flops like Viddy. Once touted as “the Instagram of video,” the video app was a precursor to Vine — videos were capped at a bite-size 15 seconds.

Early on, Viddy was wildly popular; Winters remembers it being No. 1 in the app store. Users could blast invites to the app out to their Facebook friends, a “hacky” integration that brought in scores of new users early on. Once newcomers tried it, though, they didn’t stick around. It was what Winters calls “shark fin growth,” because the graph of the app’s users over time looked like a fin. In 2014, Viddy shut down.

“Now, I think we’re a lot more diligent about saying growth is about retention,” Winters said.

Growth teams have also been gaining traction in B2B companies, Winters noted. Historically, these companies have grown via sales departments. Now, he sees a rise in what he calls “sales-assisted growth” — B2B companies that employ sales teams, but also employ growth teams to optimize their self-service signup workflows.

The two teams ideally “play off each other in very healthy ways,” Winters said.

Companies like Zoom, Slack and, yes, Eventbrite embody this shift, Winters said. When he started at Eventbrite in 2018, the company didn’t have a sales team. Today, though, they rely on sales to strike deals with larger clients. This new approach has not only helped them strike a deal with Sierra Nevada Brewing, but also with Canada’s MRG Group and CraftJam.

“The best practices of how to do [sales-assisted growth] are still being developed,” Winters said. But he sees it as “the next wave” in growth. It’s fitting phrasing, because in the tech sector, growth really is a bit like an ocean — a huge, evolving ecosystem unto itself.