Why Social Class Matters in Diversity and Inclusion

As a diversity and inclusion consultant, I’m always looking for articles, books, and other relevant information to sharpen my skills and share insights with my colleagues and clients. One day, while surfing the Web, I discovered a thought-provoking Harvard Business Review article titled “Why Companies Should Add Class to Their Diversity Discussions.” The piece stood out not just because the information was beneficial to my clients, but because I saw myself mirrored in the words of this article.

What Is Social Class?

“People are born into a social class. We make decisions on education, occupation, relationships, reproduction, neighborhoods, clothing, diet and vacation destinations based on class. Although individuals are not assigned to a lifelong occupation or social position, as is the case with a caste system, class profoundly affects how people live, the type of work they will likely do and their income.” – CJ Gross, What’s Your ZIP Code Story?

The article was inextricably related to my life and experiences. Ever since I read it, I’ve had an insatiable hunger to learn more. The article conveyed the many challenges that social class can present, which was all too familiar to me on both conscious and subconscious levels.

A few days after reading the article, I had coffee with a colleague whom I’ll call James. He hails from Montgomery County, another wealthy district in Maryland. Our conversation soon turned to the subject of racial bias. Over our second cup, James said that his family was one of the few African Americans in his neighborhood when he was growing up.

He went on to tell me that they were denied access to a local country club. As he said it, I could tell that this rejection had burned in the pit of his stomach for some time. Until that day, I never found myself at a complete loss for words with another African American.

Although James and I both grew up in wealthy communities, I could not relate to his country club denial as I had little to no experience engaging in activities outside of my social class. In comparison, I had relatively few racial bias experiences because I was raised in a predominantly African American neighborhood.

Read More About DEI What Does DEI Mean in the Workplace?

Race Is Only Half the Conversation

As our conversation continued, I realized that race was only half ― social class was the other half. Our perceptions on racism and social class differed because we came from different class backgrounds or ZIP codes. This anomaly validated the article I had just read. I was unable to understand his dilemma because the conversation had expanded beyond race and into social status and social class.

Living in different ZIP codes does more than separate us by region: it becomes a barrier to establishing communication and building trusting relationships.

This same scenario plays out in our personal and professional lives. Living in different ZIP codes does more than separate us by region: it becomes a barrier to establishing communication and building trusting relationships. If we are unable to relate to one another, the conversation usually comes to a screeching halt. When that occurs, we cannot understand the challenges and problems people face, nor can we find commonalities or camaraderie. 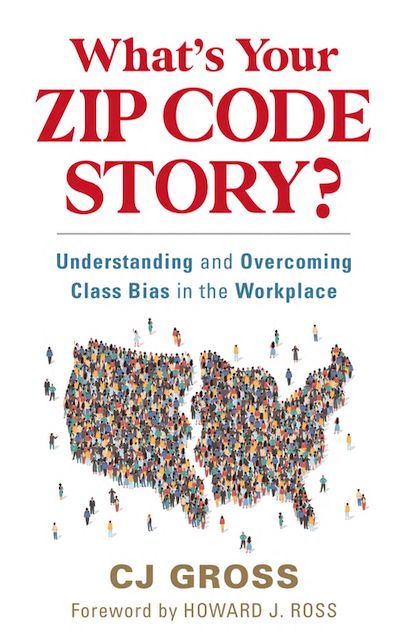 In terms of inclusion, diversity, equity and accessibility, if we believe that our primary challenges only pertain to race, ethnicity, sexual orientation, generation and religion, we’re missing a big piece of the puzzle.

A few months after my conversation with James, I facilitated a one-hour discussion about the article at the consulting firm where I worked. That discussion turned into an informal workshop.

I never expected it. Not only did my colleagues welcome the discussion, but they also shared their experiences and perspectives from their different ZIP codes. The more I listened to their comments and questions, the more I realized the impact of ZIP code. Social class influences everyone. From the person who answers the phone at the front desk to the CEO, each person had been affected by class and had a unique ZIP code story.

The deluge of follow-up discussions and emails I received proved that the effects of social class had not only elicited an epiphany for me but for what seemed like everyone else. I was on to something.

Once I shared this information with my family and friends, social class and its profound effects were further validated. One family member, whom I’ll call Jack, struggled to get promoted at work. Although Jack had earned a college degree, he said he always seemed to be stuck on the bottom rung of the corporate ladder. He was unaware of the rules.

Jack is not the only one who missed the memo and the playbook about unspoken rules. As reflected in the article, many class migrants, both men and women, face challenges that hinder their career mobility.

What Is a Class Migrant?

If you’re not familiar with the term class migrant, let me explain.

Although boundaries between classes are often blurry, a class migrant is an individual from the working class who attempts upward mobility to the middle class. The transition is multifaceted.

It not only hinges on an individual’s shift between educational and occupational status (such as shifting from a semi-skilled blue-collar job that requires a high school diploma to a semi-professional white-collar profession that requires a college degree), but it also hinges on the complexity of switching between cultural and social status spheres.

That is, because an individual’s identity is shaped by income, occupation and residential status, he or she has limited to no exposure to the rules and codes of another class. To that end, people from different ZIP codes or classes, not just races or gender, experience a different social reality, as did James and Jack.

When we are unfamiliar with the social rules in any setting, we are equally unfamiliar with what is or is not appropriate. In a work setting, this not only can make you feel judged and misunderstood, but it could also offend those who are playing by the rules which are, to the class migrant, invisible rules. Worse, class migrants often feel like they don’t belong, making them feel alienated.

Often, status and success do not remedy feelings of self-doubt. The awareness of differing from others can elicit feelings of inadequacy, which provokes fear of being seen as a fraud. Feeling like a phony is known as impostor syndrome, a common phenomenon that occurs when one embarks on a new endeavor or faces a new challenge. Class migrants are particularly susceptible when attempting to join the middle class because they lack exposure to the culture and the codes necessary to succeed in any professional business environment.

To give you an idea of what changing classes might look like, imagine losing your position at the office and having to work in a blue-collar job.

To give you an idea of what changing classes might look like, try to imagine losing your position at the office and having to work in a blue-collar job. One of my colleagues had to step into a different class when she was hired to lead a culture initiative at a manufacturing plant. It would not take an anthropologist to see that the environment was foreign and hostile. Employees not only participated in verbal abuse, but they also got into physical altercations. She was to devise a program to teach employees emotional intelligence, self regulation, self awareness, empathy and kindness, qualities that a professional environment engendered. Although not all blue-collar jobs are this tumultuous, how could she navigate the audience and instill such codes of conduct?

Read more about DEI10 DEI Initiatives To Prioritize in the Workplace

Hard skills are one thing. Soft skills, or business-culture etiquette, are particularly challenging for most class migrants. Soft-skill challenges are so because not only are the rules unspoken, but mindsets, styles and mannerisms have been primarily shaped by the rules that govern a working-class culture. We see these dynamics play out when Larry O’Donnell, [former] COO and president of Waste Management, goes undercover at his company. Shortly after assuming the role of garbage collector, Larry is fired from his own organization.

However, although the SHRM committee accepted the topic, it abbreviated the title. I didn’t correct them because it was such a great honor to be selected. It was unreal. I was in shock when I learned that I would be speaking alongside some of the top industry experts, especially given that I was not a well-known diversity and inclusion professional at the time.

After months of preparing and rehearsing, I was ready. I was so eager to deliver my speech that I packed my bags weeks beforehand. I felt on top of the world, right up to the day of the conference. As the plane descended into New Orleans, so, too, did my excitement. Nerves got the better of me. While checking into the hotel room, it dawned on me that I had never spoken at a venue of this magnitude. A big lump grew in my throat. In a panic, I began rehearsing. I obsessed over every detail in fear that my lack of experience would be found out ― symptoms of impostor syndrome.

I tried to remind myself that I was already a national speaker and trainer, but this was different. This was not a scripted speech or workshop through my place of business. This speech was derived from my very own concept. My own material. Me, an African American from Fort Washington, Maryland, with 18 months of industry experience under my belt.

Up to this point, class was just an interesting conversation. I doubted everything from my abilities to what business I had even being there.

Excerpted with permission from What’s Your ZIP Code Story? Understanding and Overcoming Class Bias in the Workplace, by Christopher “CJ” Gross. Published by Rowman & Littlefield, an imprint of The Rowman & Littlefield Publishing Group Inc. Copyright 2022.