How NFTs Can Disrupt Gaming

Eyes have rolled in recent months at the internet’s latest obsession: “non-fungible tokens.” The term itself may even turn people off from learning more about it.

But despite some lumping NFTs into the same category as joke-cryptocurrency Dogecoin or the GameStop meme trading frenzy, these tokens are more than just a fad; NFTs have important applications, and they could change the future landscape of digital assets or how some objects are uniquely identified, trusted, verified and owned.

In its most simplistic form, a non-fungible token is a virtual deed that conveys ownership of a digital asset. Much like cryptocurrency, NFTs leverage a blockchain platform to uniquely identify and prove the existence and record keeping of a transaction.

However, as the Wall Street Journal explains, there is a key difference between NFTs and cryptocurrencies. “While every bitcoin created can be exchanged for one another, these cannot,” reports journalist Caitlin Ostroff. These tokens are non-fungible and are uniquely uploaded to a digital ledger.

The other major difference is that NFTs commonly use the Ethereum blockchain due to its versatility in being able to store and attach information to the token, whereas Bitcoin is its own proprietary blockchain and by design stores limited information about the creation and exchange of its namesake coin.

If it still sounds confusing, think about it this way, as described in a previous Built In piece: While there may be millions of replications of Leonardo da Vinci’s Mona Lisa, the only original is the one that lives in the Louvre Museum. If da Vinci were alive today, he could have created the Mona Lisa digitally and attached an NFT to uniquely identify this masterpiece (and himself as the creator). Yes, one could easily replicate and digitally copy his masterpiece all across the web, but that would be no different than someone replicating the original artwork as a postcard and mailing it to their friends.

Much like those postcard replicas are essentially worthless compared to the original Mona Lisa, the digital copies would also not have the same value as the original verified by an NFT.

More Than a Fad

While NFTs may sound like a fad, they have real uses in our digital world. Digital transformation has made it possible for physical assets to migrate to the digital world, but like a “digital signature” on a scanned image, there is often no proof of the authenticity of such images.

There needs to be some level of verification and proof of authorship for those who create digital art. That’s  why services from companies such as DocuSign have become a necessity; they provide better verification, greater trust and a guarantee that the person who added their scanned signature truly is who they say they are.

Demand from crypto-investors is one factor driving the price volatility of digital art attached to an NFT. People like Mike Winkelmann, a digital artist known as Beeple, are certainly monetizing the situation. His digital art collage, Everydays: the First 5000 Days, auctioned at Christie’s and sold for a record $69 million. This marked a historic transaction, both as the first NFT sold by Christie’s and the auction house’s first acceptance of a digital currency.

There are endless possibilities for how NFTs can be used in the gaming world to allow for the ownership and transferability of digital assets. Companies such as Riot Games and Epic Games have disrupted the industry by offering games for free, and first-person shooter and online battle-arena games have grown exponentially popular as a result. Alongside those free games, “skins” — typically visual enhancements, outfits or weapons that can personalize gaming avatars — have also become more popular, and users commonly pay a premium for these types of customizations. This is one reason why gaming company Roblox has become so successful; its platform allows so many ways for users to customize and style their identities in-game.

Even more mind-blowing is the fact that users are spending hundreds and sometimes thousands of dollars on skins that provide absolutely no improvement to the gameplay itself, only serving to enhance the appearance of a game, character or avatar. Skins have essentially become digital art for video games, and NFTs could allow digital artists who may later want to sell such designs to claim ownership of and authenticate their skins.

There are other gaming applications for NFTs, too. Take Warcraft or Minecraft: Both games allow users to create their own gaming world or map, and they provide endless tools to help gamers leverage their creativity and build elaborate, unique worlds. But what if gamers could sell their proprietary map or world — and their authorship or rights to it — to someone else? NFTs could help make this possible.

Along with ownership of such designs, another challenge with video games is that all the digital accessories, skins, maps and worlds created within a specific ecosystem or platform are “locked” into that game. That means if a 13-year-old is spending all of her or his allowance on customizations for one game, all of that is lost if the game goes away in its entirety.

But NFTs can facilitate the transferability of skins and other accessories between different games. For example, what if a Souvenir Dragon Lore AWP sniper rifle (valued at $26,000 in real American dollars thanks to its rare drop rate) in the game Counter-Strike: Global Offensive could be imported into Call of Duty: Modern Warfare?

Or what if that rare turtle or bacon Minecraft cape could be transferred to Roblox’s Adopt Me! game? If players are able to get more use out of the skins and accessories they buy for one game, more gamers might shell out money for such customizations.

Leyline, a not-for-profit company looking to gamify environmental and social sustainability, is working on developing collectible NFTs that people can earn by doing good social deeds that have a positive impact on the environment and their community.

“We are seeing companies move from the box model, to a free-to-play, and now a play-to-earn,” Jeremy Dela Rosa, founder and CEO of Leyline, told me in an interview. “The market is transitioning from a competitive approach to a more collaborative one."

As more use cases like this crop up, we expect that it is only a matter of time before gaming companies begin to adopt a centralized marketplace and blockchain to allow users to freely create and transfer digital goods.

NFTs in the Future

As NFTs have received more hype, cryptocurrency investors are increasingly becoming crypto-art collectors, and NFTs are currently finding their strongest application in the playground of digital baseball card trading and NBA highlight collections.. But we expect they will have more practical applications in the future.

According to Nonfungible.com, which tracks the market for NFT sales, NFT assets grew from $40.9 million in 2018 to more than $338 million in 2020. The chart below shows weekly NFT sales and transaction activity for 2021, which according to Enjin.com, has already exceeded all of 2020 levels in just the first three months of this year. 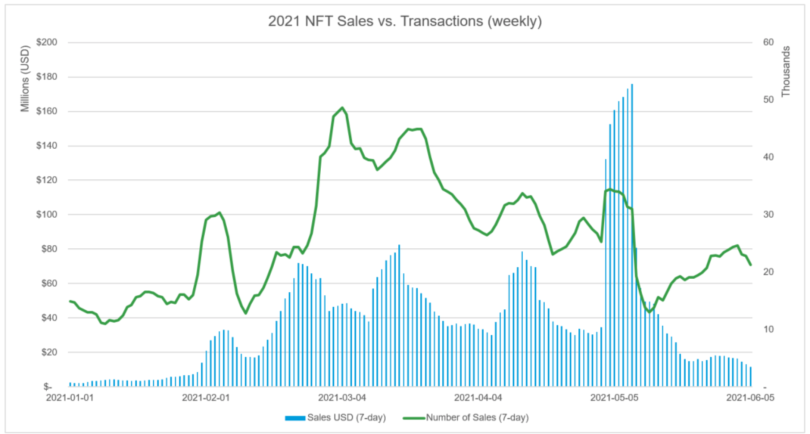 While speculation and volatility of valuation continue, the use case and practicalities of NFTs will likely stick around. There is a strong need for an underlying technology that can provide a trusted and verified source of creatorship for digital art. A decentralized blockchain network such as Ethereum functions as an excellent platform to provide a ledger that attaches, in essence, a smart contract to pieces of digital art