Beware of the Dummy Variable Trap in Pandas

Here are a few important caveats to keep in mind when you’re encoding data with pandas.get_dummies().

Parul Pandey is a machine learning engineer at Weights & Biases.

Parul Pandey is a machine learning engineer at Weights & Biases.

What Are Categorical Variables?

First things first, categorical variables are variables that have value ranges over categories, such as gender, hair color, ethnicity or zip codes. The sum of two zip codes is not meaningful. Similarly, nobody is asking for the average of a list of zip codes; that doesn’t make sense. Instead, categorical variables can be divided into two subcategories based on the kind of elements they group:

Now that we know what categorical variables are, it’s clear we cannot use them directly in machine learning models. They have to be converted into meaningful numerical representations; this process is called encoding. There are a lot of techniques for encoding categorical variables, but we’ll look at the one provided by the Pandas library called get_dummies().

As the name suggests, the pandas.get_dummies() function converts categorical variables into dummy or indicator variables. Let’s see it working through an elementary example. We first define a hypothetical data set consisting of employee attributes at a company and use it to predict employees’ salaries. 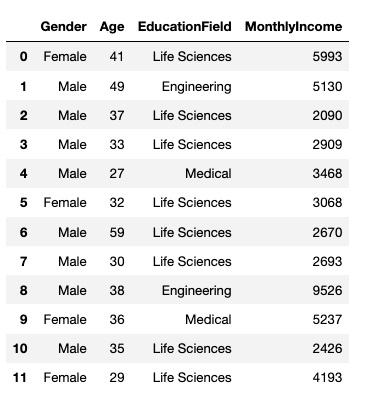 We can see that there are two categorical columns in the above data set (i.e., Gender and EducationField. Let’s encode them into numerical quantities using pandas.get_dummies() which returns a dummy-encoded data frame.

Similarly, the column EducationField also gets separated into three different columns based on the field of education. Things are pretty self-explanatory up until now. However, the issue begins when we use this encoded data set to train a machine learning model.

Let’s say we want to use the given data to build a machine learning model that can predict employees’ monthly salaries. This is a classic example of a regression problem where the target variable is MonthlyIncome. If we were to use pandas.get_dummies() to encode the categorical variables, the following issues could arise.

Consider the employee example above. Let’s isolate the Gender column from the data set and encode it.

If we look closely, Gender_Female and Gender_Male columns are multicollinear. This is because a value of 1 in one column automatically implies 0 in the other. We call this issue a dummy variable trap, which we  represent as:

Multicollinearity is undesirable, and every time we encode variables with pandas.get_dummies(), we’ll encounter this issue. One way to overcome this problem is by dropping one of the generated columns. So, we can drop either Gender_Female or Gender_Malewithout potentially losing any information. Fortunately, pandas.get_dummies() has a parameter called drop_first which, when set to True, does precisely that. 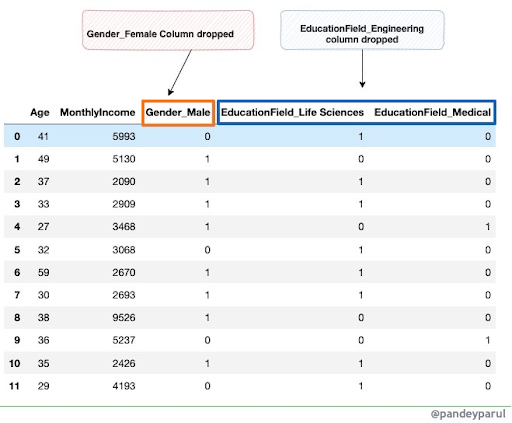 We’ve resolved multicollinearity, but another issue lurks when we use dummy_encoding.

More From Built In Machine Learning ExpertsWhat Is Deep Learning and How Does It Work?

To train a model with the given employee data, we’ll first split the data set into train and test sets, keeping the test set aside so our model never sees it.

The next step is to encode the categorical variables in the training set and the test set.

As expected, both the Gender and the EducationField attributes have been encoded into numerical quantities. Now we’ll apply the same process to the test data set.

Wait! There is a column mismatch in the training and test set. This means the number of columns in the training set is not equal to the ones in the test set, and this will introduce an error in the modeling process.

One way of addressing this categorical mismatch is to save the columns obtained after dummy encoding the training set in a list. Then, encode the test set as usual and use the columns of the encoded training set to align both the datas set. Let’s understand it through code:

Now, we’ll encode the test set followed by realigning the training and test columns and filling in all missing values with zero.

As you can see, both data sets now have the same number of columns.

Another more preferable solution is to use sklearn.preprocessing.OneHotEncoder(). Additionally, one can use handle_unknown=“ignore” to solve the potential issues due to rare categories.

Note, you can also drop one of the categories per feature in one- hot encoder by setting the parameter drop=’if_binary’. Refer to the documentation for more details.

Before You Go Somewhere Boring, Put Your Skills to the TestBuilt In Learning Lab: Enroll in Courses. Grow Your Skills. Explore Careers.

This article looked at how Pandas can be used to encode categorical variables and the common pitfalls associated with it. We also looked in detail at the plausible solutions to avoid those problems. I hope this article has given you some insight into what a dummy variable trap is and how you can avoid it. The two articles referenced in this post are great references, especially if you want to go deeper into issues related to multicollinearity.