QuarantineChat Is Keeping Chance Encounters Alive in the Age of Distancing

In isolation, it’s a way to depend on the kindness of strangers.

Over the last weekend in March, John, of upstate New York, told me about his stepfather’s uncle, who’s hospitalized with fever and breathing difficulty. The two aren’t especially close, but it’s a signal that COVID-19 is beginning to hit home in ways beyond shelter-in-place orders and social distancing. Earlier in the week, across the country, in the Bay Area, Miranda wondered aloud to me if the illness that befell her in late January and early February may have been coronavirus-related.

“I heard they’re trying to come up with a test to see if you’ve already had it, which I would love to have, because I’d like to know how safe I am back in society,” she said.

I tell both that, luckily, neither I nor any friends or relatives have fallen ill, though I worry about the many hospital nurses in my extended family, including a mother-in-law who not long ago slept in a heated tent in her garage, in Michigan, out of an abundance of concern for her family inside the home. But our conversations also touch on the sorts of topics more commonly associated with idle banter between strangers — which we are — like pets and weather and politics and pop culture.

QuarantineChat connects strangers from around the world by phone, aiming to approximate the low-stakes comfort and occasional serendipity of random conversations with random people.

Both talks happened through QuarantineChat, a new app the sudden popularity of which is easy to comprehend. QuarantineChat connects strangers from around the world by phone, aiming to approximate the low-stakes comfort and occasional serendipity of random conversations with random people — the kind that’s suddenly in short supply offline.

After a user downloads the app, called Dialup, and joins the QuarantineChat “line,” their phone rings once per day and pairs them up with a stranger at random. A recording prompts them to look out the window and discuss what they see, an icebreaker option that my conversation partners and I have alternately taken or left but appreciate nonetheless. (Other “lines” on Dialup are topic-specific — i.e. gaming, podcasts, poetry — and ring at scheduled times. Most existed prior to QuarantineChat, which launched in early March.)

The app co-creator, Max Hawkins, has some favorite chance connections of his own. A user on the other end during one call is, like Max, in a relationship with a woman from China. Their partners joined the conversation, which quickly moved to Mandarin, and they discovered some shared interests, and even shared history.

“I found out that [the caller’s] wife was the daughter of the founder of the school that my girlfriend went to in Shenzhen,” Hawkins told Built In. “It was just very serendipitous.”

With stops at Apple, YouTube and Google, Max’s professional resume proves his technical chops, but his artistic CV might be more telling in terms of his conceptual interests.

Randomness is the clear throughline across all his recent projects — a computer program that randomly determined where he lived for two years, a group “dedicated to attending randomly selected Facebook events,” and, from 2012, a phone-network art project that connected strangers between 2 a.m. and 5 a.m. to talk about their dreams. Think Freud meets Joe Frank.

“At the time I put that together, I was listening to a lot of Joe Frank,” Hawkins acknowledged. 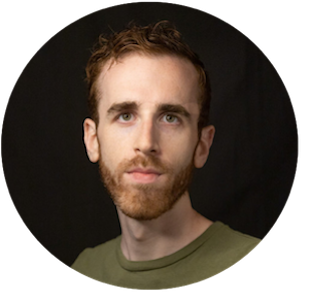 Years later, Max (left) would repurpose the late-night-call software to randomly dial Danielle Baskin, a then-new friend who lived on the opposite coast. Baskin, who shared Max’s love of the telephone, would soon help Max expand the software again into Dialup, and when the novel coronavirus started to spread, QuarantineChat.

“I started to learn about what was happening as other countries were locking down,” Hawkins said. “I was also thinking about my grandmother, who lives alone. We realized there was an opportunity to connect people in a surprising way, and maybe make people feel a little bit less lonely.”

Stranger Danger? Not So Much

It turns out, small, random encounters carry more weight than one might suspect at first blush. In psychology, social network theory distinguishes between so-called strong ties and weak ties. Strong ties include significant others, close friends and family members, and weak ties include casual acquaintances and strangers or near-strangers with whom we share small commonalities.

The seminal text in this field is Mark Granovetter’s much-cited 1973 study, “The Strength of Weak Ties.” He found that job seekers’ weak-tie relationships were actually more fruitful than close ones when it came to helping land a gig, the hypothesis being that weak ties in essence bridge people beyond cliques and therefore foster community integration. Still, close ties, perhaps obviously, were considered people’s go-to choice for emotional support.

But more recent research points to people also leaning on weak ties for support, and often finding it there.

Harvard University sociologist Mario Luis Small describes in his 2017 book Someone to Talk to small- and large-scale studies that found more than half of participants confided in people who could be characterized as weak ties. “People’s true pool of confidants is everyone they run into,” he wrote.

Sometimes, people actively avoided confiding in close contacts, sometimes they thought certain weak-ties could better empathize and sometimes “they literally just talked to the person because they were there,” Small told Psychology Today in 2017.

Work by psychologists Gillian Sandstrom and Elizabeth Dunn shows such impulses can be useful. When studying interactions between Starbucks patrons and baristas, they found that those who made the transaction a social interaction built a sense of attachment. Their findings, published in 2013, showed “how seemingly trivial social experiences can shape belonging and well-being in the real world,” they wrote.

The pair also authored a 2014 paper that further underscored “the surprising power of weak ties.”

“Chat with the coffee barista, work colleague, yoga classmate and dog owner — these interactions may contribute meaningfully to our happiness, above and beyond the contribution of interactions with our close friends and family,” they concluded.

Such encounters are off-limits now, at least IRL, but it’s the same small-but-consequential communication — the “magic” of “surprise conversations,” as Dialup calls it — that QuarantineChat looks to replicate.

“Even if you feel socially anxious in some situations, because it’s a stranger and you might not talk to them again, it’s freeing,” Hawkins said. “I feel it’s easier to be comfortable in that sort of conversation than one that has higher stakes.”

It also expands horizons by not playing any algorithmic matchmaker games, according to Hawkins. “So much of the way we use the internet is based on pairing you with someone who’s exactly like you,” he said. “It gets you into a filter bubble. People are often afraid to meet someone who might be in a different place or have a different community or different interests.”

Hawkins and Baskin of course aren’t the first app-makers to tap a collective desire to talk to strangers, but many forerunners have either infamously fizzled out or settled into a niche existence. Long before imposed isolation, video-based ChatRoulette was a brief phenomenon, circa 2010, before it ultimately degenerated into, um, exhibitionism.

My own QuarantineChat encounters have all been blessedly well-mannered, but Baskin and Hawkins are certainly aware of previous apps’ sordid trajectories and are taking steps to avoid them. “It’s something I think about all the time: How do you make this not develop into weirdness?” Hawkins said.

The app does have a block button, which prevents users from being paired again and notifies the team that a problem occurred. They’re also developing a feature that will allow users to privately provide feedback, including whether they’d like to speak to a match again. “We’re doing a lot to make sure everybody has a good experience,” Hawkins said.

The very nature of the experience could be having a positive effect too. Neither co-founder is interested in adding a video component, despite some requests, Hawkins said. More users have reported that the lack of video frees them of image-consciousness, according to Hawkins. It also of course precludes ChatRoulette-esque self-display.

Also, the fact that calls come just once per day and aren’t scheduled might dissuade bad behavior. “I hope that makes people take it more seriously, because it’s not something that’s just on demand,” Hawkins said.

The success of QuarantineChat has effectively made it a full-time job for Hawkins and Baskin. Both have devoted themselves to site support, bug fixes and generally making sure Dialup — which is now nearing 10,000 users — can handle the influx of activity.

The rapid growth has been taxing at times, but Hawkins still looks upon the enterprise with labor-of-love fondness. “It’s been a struggle to keep up with all the demand; it’s a lot of work,” Hawkins said. “But it’s cool to get emails from people saying how much it means to them.”

“That keeps us going — feedback, especially from older people who are really appreciative because they’re isolated socially, and it’s like a lifeline because they have some sort of connection.

RelatedWhat COVID-19 Means for the Future of Remote Work