How to Find Residuals in Regression Analysis

Do you need to improve your regression model’s performance? Use this sample Python code to help you find residuals in your own projects.

Regression models, both single and multivariate, are the backbone of many types of machine learning. Using the structure you specify, these tools create equations that match the modeled data set as closely as possible. Regression algorithms create the optimal equation by minimizing the error between the results predicted by the model and the provided data.

That said, no regression model will ever be perfect (and if your model does appear to be nearly perfect I recommend you check for overfitting). There will always be a difference between the values predicted by a regression model and the actual data. Those differences will change dramatically as you change the structure of the model, which is where residuals come into play.

How Do You Find Residuals?

Let’s talk about how to calculate residuals.

In order to calculate residuals we first need a data set for the example. We can create a fairly trivial data set using Python’s Pandas, NumPy and scikit-learn packages. You can use the following code to create a data set that’s essentially y = x with some noise added to each point.

That code performs the following steps:

We can now use that data frame as our sample data set.

Want More Data Science Tutorials? We Got You.How to Use Float in Python (With Sample Code!)

That code works as follows: 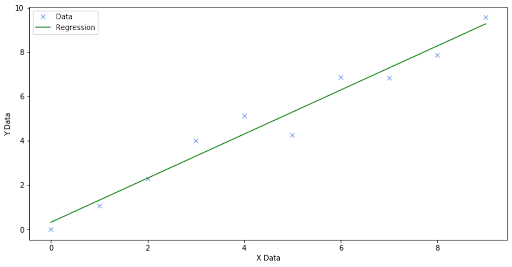 How to Find Residuals

We could have seen that coming because we used a first-order linear regression model to match a data set with known noise in it. In other words, we know that this model would have perfectly fit y = x, but the variation we added in each data point made every y a bit different from the corresponding x. Instead of perfection, we see gaps between the Regression line and the Data points. Those gaps are called the residuals. See the following plot which highlights the residual for the point at x = 4. 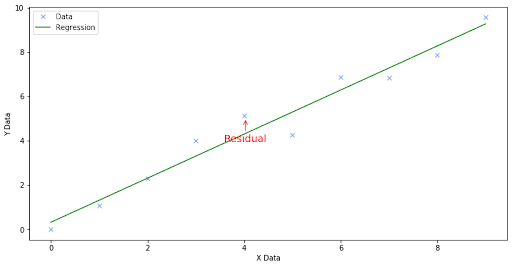 We can now plot the residuals to see how they vary across the data set. Here’s an example of a plotted output: 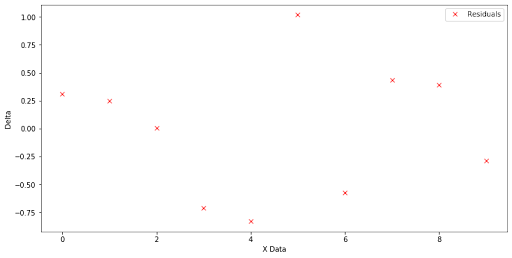 You can also see how some of the errors are larger than others. Several of the residuals are in the +0.25 – 0.5 range, while others have an absolute value in the range of 0.75 – 1. These are the signs that you look for to ensure a model is well fit to the data. If there’s a dramatic difference, such as a single point or a clustered group of points with a much larger residual, you know that your model has an issue. For example, if the residual at x = 4 was -5 that would be a clear sign of an issue. Note that a residual that large would probably indicate an outlier in the data set, and you should consider removing the point using interquartile range (IQR) methods.

To highlight the argument that residuals can demonstrate a poor model fit, let’s consider a second data set. To create the new data set I made two changes. The changed lines of code are as follows:

The first change increased the length of the data frame index to 100. This created a data set with 100 points, instead of the prior 10. The second change made the Dependent variable be a function of the Independent variable squared, creating a parabolic data set. Performing the same linear regression as before (not a single letter of code changed) and plotting the data presents the following: 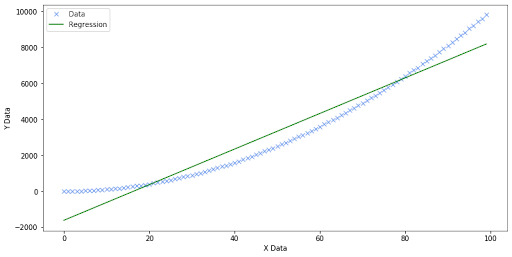 Since this is just an example meant to demonstrate the point, we can already tell that the regression doesn’t fit the data well. There’s an obvious curve to the data, but the regression is a single straight line. The regression under-predicts at the low and high ends, and over-predicts in the middle. We also know it’s going to be a poor fit because it’s a first-order linear regression on a parabolic data set.

That said, this visualization effectively demonstrates how examining the residuals can show a model with a poor fit. Consider the following plot, which I generated using the exact same code as the prior residuals plot. 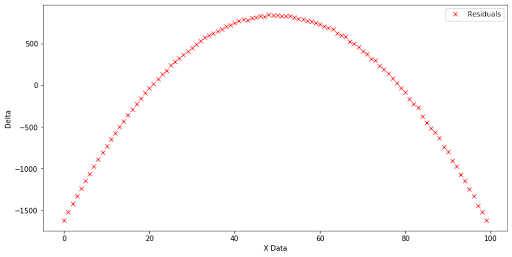 If we repeat the process using a second-order regression, we obtain the following residuals plot. 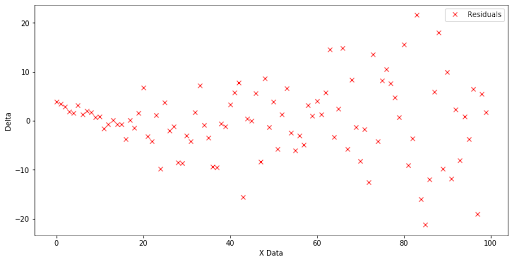 The only discernible pattern here is that the residuals increase as the X Data increases. Since the Dependent data includes noise, which is a function of the X Data, we expect that to happen. What we don’t see are very large residuals, or indications of a different shape to the data set. This means we now have a model that fits the data set well.

And with that, you’re all set to start evaluating the performance of your machine learning models by calculating and plotting residuals!