Robin’s Founders Are Ready for the Workplace Revolution

In the hybrid work era, the Boston-based company is redefining the workplace. Built In sat down with one of its co-founders to highlight his journey in growing the fledgling startup.
Written byAnderson Chen
Anderson Chen
Staff Writer at Built In
Anderson Chen is a Built In staff writer covering tech companies for Brand Studio.

Zach Dunn, co-founder and VP of customer experience at Robin, remembers a time when the only map employees saw was the one showing the fire exits. Back then, simple decisions like changing desks were a logistical nightmare for those running the workplace. Given that the average person spends a third of their life at work, according to Gettysburg College, the sterile environment of the office — stripped down to its basic, immutable functions — sparked something within Dunn.

“The workplace has tremendous potential to help teams accomplish great things, regardless of industry,” he said.

The needlessly complex nature of office logistics seeded Robin’s mission statement, one that Dunn, his twin brother Sam and business partner Brian Muse would nurture to become the company it is today. In their view, offices should benefit employees in ways that are more visible. 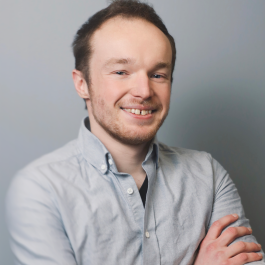 But Robin wasn’t a high-flying startup right out of the nest. The trio first drew inspiration from their previous company, One Mighty Roar, where they helped clients bring digital experiences into physical spaces. From there, they refined the idea, eventually stopped client work and then funded the first $1 million from the company bank account. After raising a seed round six months later, Robin took off — a full-fledged startup with its own flexible workplace platform.

Eight years later, the company now helps businesses navigate the uncertain, post-pandemic realm of hybrid work. Born out of Dunn’s love of working in what he describes as “customer-land,” the company culture continuously puts the customer experience first. In the shifting landscape of the workplace model, Dunn wants to redefine the nebulous definition of the office, or what it can be. Like their founder, his team also believes that the workplace can be more than just a physical space. In fact, nine of the original 15 employees from his previous company work at Robin today.

“I love the workplace,” Dunn told Built In. “I believe if you do your job well, you should like what happens in the world.”

What scared you the most during your first few years as a founder?

You don’t know if you will exist in six months, but you have to act like it. You’re rarely the most qualified person in the room, but you can still act with urgency. It helps to hire great people who believe in you and the vision.

Who did you look to for inspiration early on and why?

I admire companies and people who know how to use their strengths well. It’s easy to look at tech giants like Facebook, Google or Apple and think, “That’s what we should be.” You can’t copy an entire company, but you can learn from what they do well.

Instead, I’ve found it more useful to admire strengths instead. How Intercom wrote blog content about their internal process, how Stripe made documentation into a marketable feature, how Front positioned itself so well as a solution instead of just an email service, or how the CEO of Cloudflare wrote a blog post explaining a controversial decision.

When you’re early on, it’s a constant battle to choose which details you focus on — both for the business, and your own mental health. And yes, at times this is easier said than done.

Often this would be people who were a step or two further than us. So if we were in an early stage, we’d look at founders or companies a few years older. When you’re starting a company, you spend a lot of time thinking about role models — and any company that survives to the next stage must be onto something.

Were there any moments when you felt like giving up? If so, what pushed you to keep going?

I never thought of giving up, only of having to start over. I learned to keep a growth mindset. If you believe in the vision, you learn to view setbacks as an opportunity to get it right the next time. You’re going to be wrong sometimes, and often your first job is to notice.

For the past 12 years, I’ve taken at least 10 pages of notes per day. Most of the time, it’s a way for me to help think through problems. Once a week, I write down the number one problem I’m wrangling that week — most of them seem silly within six months.

It’s no fun building software for offices in a pandemic with 99 percent of them closed. It’s a lot more interesting to make hybrid work software afterwards. The workplace has a unique chance now to make a big leap forward, and expand their workplace to include more than just the traditional office. Helping our customers do this well should keep us busy for at least a year or two.