How Restaurant Food Suppliers, Cheetah and Choco, Use Tech to Deliver to Consumers

Four “intensive” weeks, each with plenty of all-nighters. That’s how long it took Choco, a New York-based company that connects restaurants with suppliers to help them order food ingredients, to adjust to shipping food directly to consumers.

“We’re not a grocery company,” Daniel Khachab told Built In. “That’s not what we started for.”

Choco launched the original incarnation of its app in 2018, to streamline food-ingredient ordering between restaurants and suppliers — a traditionally sluggish process that involved either email or phone.

“[Food suppliers] were piling up with food they couldn’t sell.”

But when the pandemic hit and restaurants either shuttered or downshifted operations, Choco’s supplier partners were soon faced with overflowing inventory. “They were piling up with food they couldn’t sell,” he said.

A consumer-facing addition — however challenging — seemed like a must-do.

Across the country, in San Francisco, a similar food-supply startup faced the same problem. Cheetah also lets restaurants order ingredients through the company’s app, but it essentially is the distributor. The company warehouses food it receives directly from growers; the glut of perishable inventory was Cheetah’s problem.

Here’s how the traditional food supply chain works: food goes from grower to packager to distributor to end point (restaurant, organization or consumer). When Cheetah hustled to salvage food by extending its service to consumers, the fact it skips the packaging link in the chain allowed it to do so more easily than otherwise. Even though the warehouse was set up to pick large orders, for restaurants, the process didn’t hinge on the kind of inflexible equipment common to packagers. 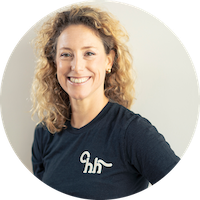 “The fact that we basically own and manage the entire supply chain in house — sourcing products, managing inventory, managing demand prediction, managing inflow and outflow of products in the warehouse, and of course the entire app experience — is what enabled us to do that,” Cheetah CEO Na’ama Moran (left) told Built In.

Of course, the entirety of the food supply chain is vast and complex, and not everyone is equipped to make such pivots. Several factors conspired to cause the shocking images we saw in April of fields full of dumped and buried produce, including packaging challenges, prohibitive exporting costs, finite storage space, and fewer volunteers manning food banks. And it wasn’t just restaurant disruptions at play. The closure of stadiums, schools and other major food destinations wreaked havoc.

Moran acknowledged that it’d be difficult for massive distributors like Sysco and US Foods to scale out the way Cheetah did. “It’s pretty hard to be both [restaurant and consumer deliverer], and it’s really hard to do both when you have a legacy supply chain,” she said. “But I’m sure everyone in the food service supply chain is looking for solutions.”

Even if food-saving pivots like those made by Cheetah and Choco are marginal in the big picture, they do seem to show that a more fully digitized supply chain can help. (Investors seem to think so; Cheetah recently raised $36 million, and Choco raised $30.2 million.)

The digitization of the food supply chain has been an ongoing topic of conversation in agriculture for years, but it hasn’t been widely prioritized, Rob Leclerc, founding partner of agtech venture capital firm AgFunder, told Built In. (AgFunder has not invested in either Choco or Cheetah.)

That’s a problem, considering the upsides, according to Leclerc. “Once something is digitized, you have much more dynamism around the ability to reroute and tap into changing pools of supply and demand,” he said. “And that’s effectively what’s needed in this market.”

“Digitization can’t solve every problem, but to be able to dynamically connect buyers and sellers that may have no preexisting relationship with each other is going to be really important,” he added.

Since Cheetah and Choco both had existing apps, they needed only to build a customer-facing option into the existing architecture rather than conjure up a brand new digital solution. The product piece was one of the easier challenges. “We didn’t need to do a lot of adaptation to the app,” Moran said.

Cheetah added a prompt that asks whether the user is a restaurant or consumer, plus a cart that lets you add promo codes and choose a pick-up location. Cheetah has 10 Bay Area pick-up locations from which its refrigerated trucks sell customers their pre-ordered selections. Choco — which operates in New York, Washington, D.C., San Francisco, Chicago and Seattle — delivers to customers’ doors within a 24-hour window.

Order sizing was another consideration. Packaging outfits tend to cater to either distributors that deal in large packages, for restaurants or large institutions, or small packages, for consumer groceries. For packagers that operate at scale, replacing or adapting their infrastructure to redirect food would be extremely expensive.

Even though Choco’s service takes place downstream from packagers on the supply chain, its suppliers faced a similar challenge, if on a far smaller scale. “How things need to be packaged for consumers is inherently different than for restaurants,” Khachab said. “You can’t deliver huge metal boxes.” Choco secured large orders of paper bags so suppliers could separate food into smaller, consumer-sized packs.

“I don’t remember seeing anything that impacted the ability to do demand and supply planning to the extent that this has.”

Cheetah worked to right-size for consumers by adding a new section where shoppers can buy individual items. Still, many items on the consumer side of the app are sold in larger wholesale packages. That helps move the product more quickly, and works for people who are stocking up, “if you need to buy for a large family or neighbors,” Moran said. “A lot of people during this crisis are buying wholesale packages and sharing with neighbors and friends.”

As for consumer delivery, Cheetah simply used its restaurant delivery trucks to act as pick-up centers for consumers. Choco doesn’t own its own fleet, but nearly all its supplier partners signed on to do consumer runs. The company recruited third-party delivery trucks for the few that declined.

As quickly as Cheetah and Choco have been able to incorporate consumer delivery while still servicing restaurants, plenty of challenges still lay ahead.

For instance, Choco home delivery requires a minimum order amount, which is set at $150 in New York City, in order to cover supplier costs. (Choco has pledged to donate any profits from consumer deliveries.) And even if consumers have some appetite for bulk, a 48-piece avocado order — which was the only avocado option when this reporter looked at the Cheetah’s consumer adjunct one day in late April — still seems a tough sell. (The number of consumer-friendly sizes, generally speaking, has since gone up.)

Moran said Cheetah constantly observes the user funnel within the app in order to optimize the experience. “We’re frankly just at the beginning of this journey,” she said.

Also, neither is immune to the availability issues that have led to infamously bare bread shelves and chicken coolers in so many of the country’s supermarkets. Indeed, any trouble spots within the app experience likely speak more to the external supply challenges of the present moment.

The pair regularly spends hours each day “really working on the algorithms and really digging into how we want the forward-looking forecast to react to certain activities,” Lipari told Built In.

The challenge is “unprecedented,” said Lipari, Cheetah’s director of supply planning and head of inbound supply. “I don’t remember seeing anything that impacted the ability to do demand and supply planning to the extent that this has.”

Being in demand forecasting, Lipari said he sometimes jokes about what his crystal ball is saying. A murkier forecast means a cloudier crystal ball. At the height of uncertainty, Mike told coworkers at an all-hands, “my crystal ball is completely dark.”

Luckily, knowing what sold well through Cheetah’s restaurant focus helped draw a roadmap, as did feedback from customers and feedback from suppliers procured by Cheetah’s category management team.

Lipari also had to draw on non-traditional data — news, social media, word of mouth — to get a truer sense of demand. The new process meant “stepping away from the math for a minute and looking at other variables that matter.”

A big part of the Cheetah data and planning teams’ recent work has been carefully monitoring sales of new consumer items to better compensate for options that fall out of stock. They’re able to see if, say, a new item performs better than anticipated. “The model picks that up and feeds that back to us in real enough time so that we can see that we’e exceeding our expectations.”

That’s what happened when the company recently started selling the Impossible Burger, the first time the meat substitute had been made available directly to consumers. The data science team saw that sales outperformed projections and gave Lipari enough heads up to generate more purchase orders.

But they have to consider higher-level category data when doing trend analysis. Perishability is also a major factor — while you can save by buying bulk on nonperishables, that’s not an option for items with limited shelf lives. The channel is key, too, as B2B remains Cheetah’s main driver, even with all the upheaval restaurants endured. Each factor offers unique insights. “We can have different trends for the different historical demand to help us with model future forecast,” Lipari said.

But given how habits like hoarding have noisied up traditional consumer patterns, Cheetah has had to put extra emphasis on recency. “A good forecast never looks at every week as being equal.” Lipari said. You always want your most recent week to weight your forecast more than five or six weeks ago. We’ve really pushed a lot more weighting into the previous two weeks, simply because things are changing so quickly.”

Luckily, the worst appears to be tapering. The number of items in stock has moved up in recent weeks. The crystal ball is no longer pitch-black.

“Things were incredibly volatile at the end of March and beginning of April, but things have begun normalizing,” Moran said. “But it’s still a very, very challenging time for proper demand prediction.”

There are smaller challenges too. Khachab, at Choco, points to consumers’ ingrained preference for aesthetically handsome produce — something restaurants are less finicky about — and Moran notes that Cheetah’s pick-up locations may have to shift when normal life resumes.

But the agility afforded in part by both companies’ digital-forward approach has paid dividends, and will so going forward, they said.

“Being able to create a resilient supply chain where we can be agile and distribute food to where it's most needed, as opposed to having it locked in a grocery store, is, in my opinion, the way of the future, with or without COVID,” Moran said. “COVID just gave us the jolt that we needed to push through with this vision.”

Indeed, Leclerc, of AgFunder, fears the factors are in place for more pandemics and more disruptions, even if other viruses might not have quite the toxic combination of high infectiousness and high death rate. And that means a greater onus on the ability to reroute supply chains.

“This could be a recurring event, particularly as we encroach on the environment and have a tight interface between animals and humans, where we have zoonotic diseases, plus globalized travel” he said.

“This could cost companies hundreds of millions or billions of dollars in lost revenue and opportunity,” he added. “There is going to be enormous pressure to get ahead of this and have solutions to avoid this next time.”