Hypersonic Voyagers: Hermeus’ Team is Working to Make the Future of Travel a Reality

The head of Quarterhorse engineering gives an inside look at what it’s like to work toward achieving record-breaking goals and how her team tackles challenges.
Written byLucas Dean

Imagine a flight from New York City to London lasting only an hour and a half.

Or going from Los Angeles to Honolulu in the span of an hour.

Throw on an episode of your favorite TV show, and by the time the credits roll, you’ve traversed an entire ocean.

While this sounds like something only travelers in the distant future could experience, Hermeus is working to make it a reality before the decade’s end. The Atlanta-based company’s long-term mission is to build Halcyon, a hypersonic passenger plane capable of traveling at 3,850 mph, by 2029.

Achieving this begins with Quarterhorse, Hermeus’ first aircraft. The remote-piloted aircraft will help the company test its technology and inform subsequent projects without putting pilots in danger.

For a “first step,” Quarterhorse is defined by lofty goals: reach Mach 4 speeds and break the airspeed record set by an SR-71 reconnaissance aircraft in 1976. Soaring ambitions like these demand a resilient, dedicated team that is up for the challenge. 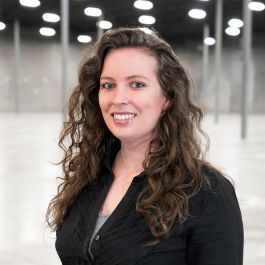 “We regularly overcome technical challenges — we have a difficult objective with an aggressive timeline,” said Danielle Mitrak, head of Quarterhorse engineering. “It’s important to celebrate the intermediate wins. Sometimes that’s celebrating a long test campaign, other times that’s getting a complicated model to finally run after hours or days of debugging.”

“Hermeus has made incredible progress with a very small team,” Mitrak continued. “Building this small but highly capable team has been critical to our success in our first objective.”

Built In spoke to Mitrak to learn more about what it’s like to work on Quarterhorse and gain insights into how Hermeus is making big dreams a reality.

With Concorde, supersonic travel — that which exceeds the speed of sound — became commercially available to passengers in the mid ’70s. By 2003, the final aircraft was retired due to financial losses and other negating factors. Hermeus has its sights set on something higher and faster — or, more accurately put, fastest. Its goal is for Quarterhorse to reach Mach 4 speeds and Halcyon to reach Mach 5. If range capability was removed from the equation, a plane traveling at 3,000 mph could hypothetically fly around the world in a little over eight hours.

What’s your role at Hermeus?

As head of Quarterhorse engineering, I’m responsible for the development effort for Hermeus’ first aircraft, Quarterhorse. I lead the engineering team as well as manage the program schedule and budget.

What gave rise to the Quarterhorse product, and what impact will its launch have?

Hermeus’ goal is to rapidly accelerate global transportation. Quarterhorse is the first step in the development roadmap to build Halcyon, a hypersonic passenger aircraft. Quarterhorse is a remotely piloted system that will enable us to de-risk the technology needed to build Halycon at a lower cost and without risking pilots onboard.

What role did you play in developing and launching Quarterhorse? What tools or technologies did your team use?

I am leading the team that is developing this product. We use typical engineering tools, computer-aided design software, finite element analysis tools, radio frequency design tools and propulsion modeling tools. We also have built internal performance-evaluation tools that enable us to link our toolchain and evaluate design decisions quickly.

What obstacles did you encounter along the way?

We regularly overcome technical challenges — we have a difficult objective with an aggressive timeline. Most recently, we’ve worked to demonstrate our engine is able to function through transition from turbojet operation to ramjet operation. We had technical challenges building up our test cell to support this campaign. We regularly ran into procurement issues due to long-lead-time items, as nearly everyone is dealing with now. We have found other solutions — utilizing existing components in different setups, finding other suppliers, building things ourselves — to get through these obstacles and delays.

The team is composed of highly motivated individuals. Typically, when we’ve had a challenging obstacle that’s gotten in our way, I remind them we’ve pushed through similar challenges and accomplished our objectives. It’s also important to celebrate the intermediate wins. Sometimes that’s celebrating a long test campaign, other times that’s getting a complicated model to finally run after hours or days of debugging. One of our conference rooms is named “Weewww!” to remind us of the importance of celebrating these wins.

“At the core of any strong team is building relationships on a foundation of trust. We work to loop others into our progress and decision-making process early and often to build those relationships.”

What teams did you collaborate with in order to Quarterhorse across the finish line?

Our engineering team works closely with all teams within Hermeus, from the flight test team to our operations team. At the core of any strong team is building relationships on a foundation of trust. We work to loop others into our progress and decision-making process early and often to build those relationships.

When you think of other companies in your industry, how does Hermeus differentiate itself?

Hermeus has made incredible progress with a very small team. Building this small but highly capable team has been critical to our success in our first objective. We focus on iterating on integrated systems so we are able to find the unknowns earlier. It requires more upfront work but will ultimately get us to a better product much faster.